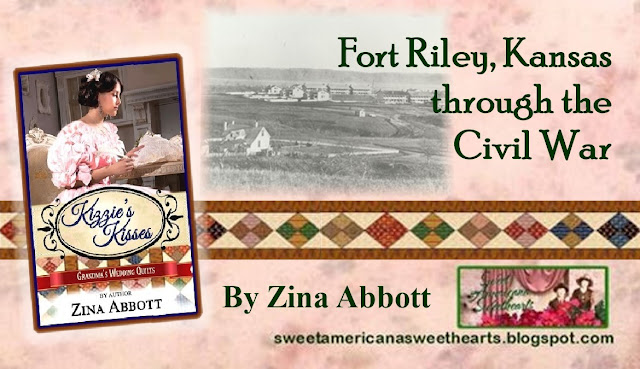 On the cover of my novel, Kizzie’s Kisses, my Kizzie is dressed in a very fancy ballroom gown and sitting in an elegantly-appointed room. Yet, as you read the book, she is described as a young woman who loves working with horses, prefers to wear trousers while riding or working outdoors and is not drawn to typical “women’s work” in the house.

What is the connection between my cover and my story? Fort Riley. More specifically, several chapters involve a special celebration dance for officers and guests at Fort Riley that took place in April, 1865, weeks after Gen. Lee surrendered to Gen. Grant which, for the most part, marked the end of the Civil War.
Did this celebration really take place? I don’t know, but I doubt it. However, we do know that such parties took place at other frontier forts, such as the well-documented Christmas party and dance at Fort Laramie in 1866. At such dances, women were at a premium. Officers much preferred to dance with a pretty woman rather than with a fellow officer who had a scarf tied around his upper arm to mark him as dancing the female role. In my story, the wife of the local captain over procurement did some procurement of her own to see Kizzie arrived for the party and got all gussied up, ready to dance her feet off.

Where, why and when was Fort Riley established?


The site of Fort Riley was chosen in the fall of 1852. It was first called Camp Center because of its proximity to the geographical center of the United States.  It was on the north bank of the Kansas River about three miles northeast from Junction City. The following spring, three companies of the 6th infantry began the construction of temporary quarters at the camp. 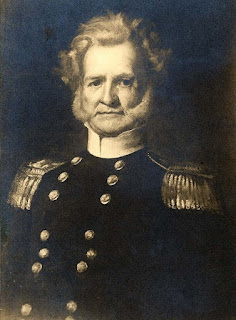 On June 27, 1853, the camp's name was changed to Fort Riley in honor of Major General Bennett C. Riley. He had led the first military escort along the Santa Fe Trail and had died earlier in the month.

The fort's initial purpose was to protect the many pioneers and traders who were moving along the Oregon and Santa Fe Trails. Because of the prevailing “Manifest Destiny” doctrine popular in the United States at that time, emigration to the western territories increased dramatically. This prompted increased American military presence for the protection of American interests in this largely unsettled territory. During the 1850s, a number of military posts were established at strategic points to provide protection along these arteries of emigration and commerce. Fort Riley became one of many such forts.

Many of the buildings at the fort were built with the native limestone of the area, several of which continue to stand today. By 1855, the post was well-established and as more and more people moved westward, additional quarters, stables and administrative buildings were authorized to be built.

Some buildings were constructed under the supervision of Capt. Edmund Ogden. Anticipating greater utilization of the post, Congress authorized appropriations in the spring of 1855 to provide additional quarters and stables for the Dragoons. Ogden again marshaled resources and arrived from Leavenworth in July with 50 6-mule teams loaded with materials, craftsmen and laborers.
Work had progressed for several weeks when cholera broke out among the workers. The epidemic lasted only a few days but claimed 70 lives, including Ogden's. A monument to him was erected on a nearby rise and still exists today. Work gradually resumed and buildings were readied for the arrival in October of the 2nd Dragoons.

The first territorial legislature met there in July 1855.
From Fort Riley, troops were dispatched to escort mail trains and protect travel routes across the plains. Fort Riley's troops took on the additional task of "policing" an increasingly troubled territory during the tensions between northern abolitionists and southern supporters of slavery,  leading to “Bleeding Kansas” and the Civil War. Through it all they were charged with continuing to patrol the Smokey Hill and Santa Fe Trails as Indian attacks increased. 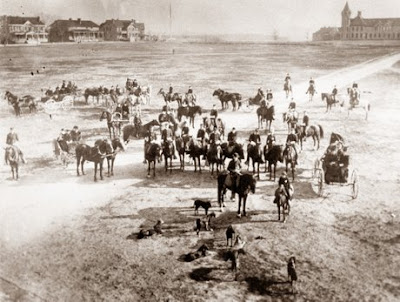 The Civil War disrupted garrison life. Regular units returned east to participate in the Civil War while militia units from Kansas and other states used Fort Riley as a base from which to launch campaigns to show the flag and offer a degree of protection to trading caravans using the Santa Fe Trail. In the early stages of the war, the fort was used to confine Confederate prisoners. 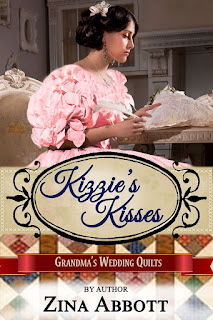 Also in my novel, Kizzie’s Kisses, during a scene that took  place in September, 1862, Kizzie’s cousin Otto Atwell expresses his intent to join a Kansas militia stationed at Fort Riley. His family having come from Missouri, he did not want to find himself fighting former neighbors. However, after his family in Salina that year had gone through the threat of an Indian massacre the previous spring, and a large party of bushwhackers that descended on the nearby town of Salina that September, he felt it his duty to serve in a state militia unit that could protect Kansas citizens from these dangers while regular soldiers were busy fighting the Civil War.

Rather than me giving you the link to this book today, be sure to watch for tomorrow’s Sweet Americana Sweethearts blog post. Something big is coming.

Zina Abbott is the pen name used by Robyn Echols for her historical novels. You may find her first five novellas in the Eastern Sierra Brides 1884 series along with her other books on her Amazon Author Page which you can visit and follow by clicking HERE.
Posted by Zina Abbott Author at 1:07 PM