TEACHERS - THEY HELPED BUILD A STATE

As the authors of the latest Lockets and Lace series introduce their books, I thought I take a look at the women who helped build a state by teaching students who went on to be the foreparents of today's population. Their stories are an inspiration to we authors.

First are the Sisters of Loretto. They came to the southwest in the early days of the Santa Fe trail and the town of Santa Fe. From there they arrived in Denver, Colorado, in 1864, offering education to children of the town, although their focus, when the order started in Kentucky, originally was teaching girls. By 1877 they were asked to provide education to the children in the Southern part of the state, primarily Conejos and remained there until 1918 when they had to leave due to the fact that their convent was no longer habitable.


Carrie G. Ayers-Hall was fifteen when she started the first school in Sterling, Colorado. She along with her mother and step-father moved Colorado. She had lost her father at the age of two at the beginning of the Civil War. She had twenty students and was paid $25.00 a month. That school was a 14'x16' sod dugout. At twenty-four, she retired to marry Harvard graduate doctor, Josiah Newhall Hall, since the school district didn't allow married women to be teachers.

Mary Pratt was the first teacher in Yuma, Colorado, starting a school there in 1885 that accepted students as old as twenty-four. Since there were two Mary Pratt's in Yuma, Colorado it has been difficult to filter out the background on this lady. As more information becomes available, it will be shared.

Amelia Guy was the first schoolteacher in Julesburg, Colorado in the summer of 1885. It was a 10'x12' wooden structure between the railroad tracks and she was paid $50 a month. Prior to that, parents who wanted their children to get an education had to send their children to Sydney, Nebraska, about thirty miles away. Amelia's sister, Lydia became the teacher after a new school was built in the fall of 1885. The two sisters also took up what was probably homesteading claims in the area.

I admire the women who came west and did what was needful for the areas they settled. In my own books for this series and Grandma's Wedding Quilt series, I was inspired by the women doctors, store owners and teachers. You can find out how their stories reflect my love of women's history.

"Josie's Dream" started it all and the town of Kiowa Wells. This was followed by "Chasing a Chance", with another resident of the town. The latest book, "The Outlaw's Letter" is about the schoolteacher of Kiowa Wells. You can find them all on my Amazon author page. Angela Raines books 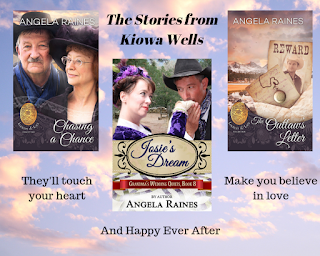