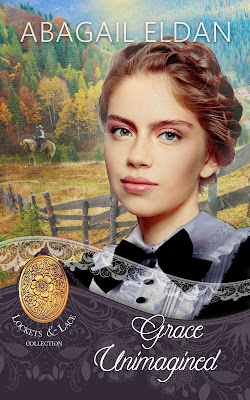 In a moment of tragedy, Grace Jansen's life changes
in a way she never imagined.
This is a story of finding hope and love
even in our darkest moments.

Authors are often asked where their ideas for books come from. Most of the time I answer that they are in the very air around us, ready to be plucked and put into a book. In the case of Grace, Unimagined, I was channel surfing and came across a documentary on Ruth Bader Ginsburg that revealed her brother was chosen to attend college, and she was not. That became the seed, the inspiration for this story.

Also, woven into this story is the conclusion of the Three Sisters Series that includes two other Lockets & Lace books, Melly, Unyielding and Joy, Unending, the story that began in Abby and Joshua.

Grace Jensen longs to be a doctor, but her dream died long ago when her brother is sent instead. When her brother squanders his opportunity, the responsibility for her family's welfare comes to rest solely upon Grace's shoulders.

Ward is not sure of his true name after he was struck with an ax at a young age. Many cannot bear to see his devastating scar, and he walks alone. He never imagines what awaits when he arrives in River City, Texas.

And here's an excerpt:

From the road came a sound of hooves and the creak of a wagon. Grace's horse neighed as the wagon came toward them, and the moon clearly defined two men sat on the seat. She straightened and strained to see if it was Mr. Taron. It was not.
As the wagon drew nearer and swerved around to the side of the house where she stood, her brother’s features grew clearer. Even without the light of the moon, she would have recognized him by the reek of whiskey as the wagon came to a stop.
He jumped down, stumbled before he righted himself, and then raked his fingers through his disheveled, thick, dark hair. The other man set the brake, looped the lines, and quickly climbed down.
He was a stranger and, although he acknowledged her presence with a nod, rudely did not remove his hat. “Miss, we wish to speak to Mrs. Babbitt. It’s urgent,” he said. His gaze did not tarry on her long but went back to the wagon as if he guarded it.
“Mrs. Babbitt? Dr. Robbie, you mean?” His words made fear catch in her throat. She swallowed hard. “Is it about her husband?”
“Go get her, Sis,” her brother said, his words clearly enunciated despite his drunken state. His eyes were serious and held something more, were haunted, if she had not known better.
She swallowed hard, shook her head, and tossed her brother the horse’s reins, and hurried to the side of the wagon. A lantern hung on the back, and the stranger, without speaking, unhooked it and held it so light flooded the wagon bed. Her fingers tightened on the wagon’s side as she recognized Mr. Taron.
Without thought, she clambered into the back and felt for Mr. Babbitt’s pulse, finding none. She lowered her head to listen for a breath, to look for the rise and fall of his chest, no matter how slight, but he was still, and all was silent eerily so.
Then a wolf or large dog howled in the distance. She raised her head to listen, and a sadness intermingled with longing, a longing for something she could not name, could not delineate.
She sat back on her heels. “He’s dead,” she pronounced, dispassionately.
“Are you sure?” her brother asked. He’d come around to stand next to the strange man.
Her brother was slim and tall, over six feet, but the stranger was taller by a good two inches and his shoulders broader. Everything came into sharp focus, the gray wagon, her brother’s forlorn face, the stranger whose hat obscured his face, the horse whose reins her brother still held, and the velvet darkness stretching beyond into infinity. The cool breeze stung her face with a million tiny needles.
She refocused on her brother, looked down at the body that had once held the life of Mr. Taron, and nodded. “I’ve been working for Dr. Robbie long enough to recognize death.”Without speaking, the stranger came to the back of the wagon and raised a hand to help her down. She took it, glad of it, happy to feel the warm grasp, to be brought back from the brink, from the precipice between death and life, and hovered on the edge of the wagon, reorienting herself. She glanced down, to thank the man, when the words caught in her throat. With his free hand, he’d raised the lantern and his face was tilted to her, illuminated, ghostly and pale, with eyes that were neither blue nor green, but a vivid turquoise, as luminous and bright as her mother’s best silk dress bought before her father’s death, an unworldly color, rare and haunting. 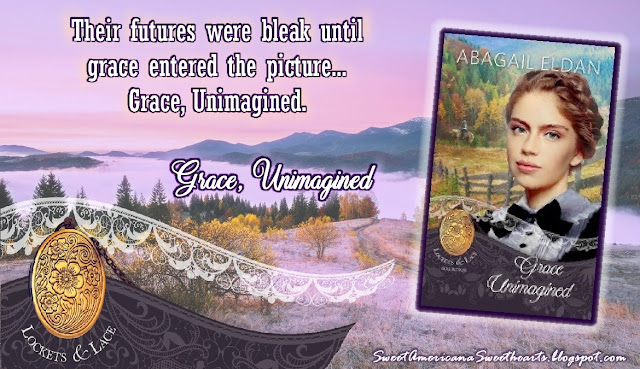 Posted by Sheila Hollinghead at 3:30 AM