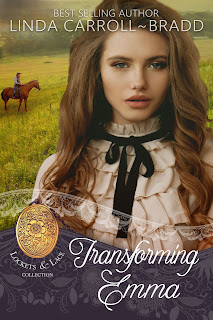 Raised a tomboy on a central Texas ranch, Emmaleigh Wallache returns from a year’s visit during which her Bostonian aunt introduced her to a life of culture—fulfilling her late mother’s wish. Her father’s secret goal is to marry her off to the son of a meat packer to guarantee his ranch’s success. Although happy for her time spent in society, Emmaleigh struggles to discover where she truly belongs.

Foreman Brett Haynes, who has waited until Emma turned eighteen so he can reveal his caring feelings, can’t believe the changes a year made. Gone is the spunky girl who raced him through fields or swung from ropes over the swimming hole. He has nothing in common with this sophisticated young woman and despairs she is unreachable. Can he remind her of life’s simpler moments and win over the heart he has always thought of as belonging to him?

I had such fun writing these characters who rediscovered each other after being apart and maturing from their youthful infatuation.

The faint, but steady, rhythm of galloping horses grew louder in the early afternoon air. A flash of color showed in a copse of mesquite trees and then disappeared into a small gully. Seconds later, six horses emerged, followed by a red coach painted with yellow accents of the Bain and Company line. Near Spengler’s blacksmith shop at the edge of town, the team slowed to a trot then eased to a walk.

He sucked in a deep breath. Brett brushed a hand over his shirt and dusted the top of his boots against the backs of his pantlegs. So many months had passed—eighteen in total. The image of a teary-eyed Emma, seated at her father’s side, waving goodbye from the buggy passed through Brett’s mind. He’d ridden as far as the wooden arch marking the southern entrance to the ranch and watched with stinging eyes as Kurt Wallache drove his only daughter into town…and out of his life. The boss’s explanation of satisfying his late wife’s wish for Emma to receive special cultural training had never made much sense. What in blue blazes did a Texas ranch wife need to know about big city culture?

Water splashed as the wheels rolled through puddles of snowmelt. “Whoa there.” The stocky driver pulled back on the reins a couple of rods down the street. The chains on the whippletree clanked.

The horses stopped parallel to the square loading platform that jutted four feet into the street. Steam puffed from their nostrils like from a boiling tea kettle, making an erratic huffing melody.

More excited than he wanted to admit, Brett tugged on the front of his long coat just to keep his hands busy. What he wished he could do was storm the stagecoach and yank open the door so he didn’t have to wait another moment to see Emma’s beautiful face. But he didn’t want to scare her with his brashness. Instead, he leaned a shoulder against the stage office wall and watched as the driver hopped down and took his time checking the harness and double-trees before moving to the coach door.

The lean shotgun rider alighted and moved to the back to unbuckle the straps holding the luggage.

On this cool day, all the leather window flaps were lowered to keep the inside as warm as possible.

First to climb out were a couple of familiar ranchers, Misters Pallaton and Fremont, with whom he had a nodding acquaintance. An action he made in deference to his position as foreman of a prominent nearby ranch. The next two passengers were chatty women with upswept hairdos and hats with doo-dads and gee-gaws that looked like they were ready for a fancy-dress ball.

The driver held the elbow of an elderly woman who set down a cane into the wooden step before disembarking.

Then no one else emerged.

Where was Emma? He pushed off from the wall, strode to the coach, and stuck his head inside. Empty. He eased to a stand, disappointment slumping his shoulders. Had she missed this morning’s stage in San Antonio?

Aunt Nadine often commented how Emmaleigh matured during her time spent in Boston—a three-month visit that kept being extended until a year and a half passed since she left her hometown. So, maybe Emmaleigh understood how Brett overlooked her. After walking right by the man who’d taught her to ride and rope and seeing him not give as much as a double take, Emmaleigh positioned herself near the stagecoach office door. Waiting for Brett to recognize her, she resisted glancing at her reflection in the office window.

For years, they’d been best friends and spent hours together daily. True, though, she’d left Texas dressing and acting like a tomboy. But upon arriving at Aunt Nadine’s, she’d been admonished about the inappropriateness of her split skirts, chambray blouses, and square-toed boots. Aunt Nadine went into a tizzy about the inadequateness of her brother’s handling of his only daughter.

Even before tea was served, the maid provided warm water to refresh herself then helped Emmaleigh into an acceptable dress and touched up her hairdo. She whisked away the offensive clothes, stating the mistress ordered them be saved for the church’s poor box.

Although she’d fought the new clothing styles at first, Emmaleigh gradually came around to her aunt’s way of thinking. Young women of good breeding and means needed to dress the part. Emmaleigh had grown used to fabrics of finer weaves and intricate dress styles designed to accent her recently acquired curves. Granted, her wardrobe was more sophisticated, but had she really changed that much?

As he passed, she’d noted he now wore his thick hair longer and his skin glowed tan from spending time outdoors. Growing older broadened his shoulders and sharpened his features, but Brett Haynes was still the most handsome man she’d ever met. His ever-present red kerchief hung around his neck.

Seeing Brett inspecting the empty coach prompted her to give up on being recognized. She gave her braided bun a pat before smoothing a hand over her burgundy velveteen knee-length coat with mother-of-pearl buttons. The modiste Aunt Nadine hired assured Emmaleigh the color complimented her fair complexion. Squaring her shoulders, she glided to the center of the platform and tucked her hands into a rabbit fur muff.

Brett turned and scanned the platform and boardwalk, his gaze finally settling on the lone waiting person. First, his brown eyes popped wide and then, his jaw dropped an inch or so.

His surprise looked as comical as Lord Dundreary in “Our American Cousin” which she’d seen at the Globe Theater last month.

“Emma?” After thumbing back the brim of a broad-brimmed, ranch hat, he tromped closer and leaned down to squint at her face. “What in tarnation have you done to yourself? Is that rouge painted on your cheeks?” He crossed his arms and shook his head. “If your father sees that, he will turn you over his knee.”
FREE in Kindle Unlimited

Amazon buy link
Posted by Linda Carroll-Bradd at 4:30 AM