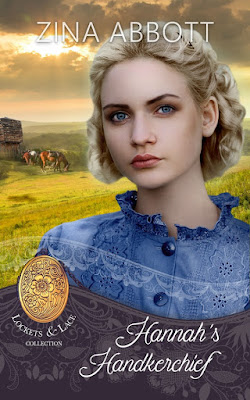 With her blonde hair and blue eyes, Hannah Atwell, a Kansas farmer’s daughter, knows she is pretty—and she enjoys pretty things. She spent her life striving to be the perfect, obedient daughter. She feels she is destined for something more than being a farmer’s wife living in a soddie.

While at a party held at Fort Riley, Kansas, to celebrate the end of the Civil War, Hannah begins to question if always doing what she is told is to her advantage. The special event, complete with dancing with handsome young officers and a chaste kissing fundraiser for the Sanitary Commission, opens Hannah’s eyes to possibilities for her life as surely as Lieutenant Jake Burdock captures her heart. She impulsively offers him her handkerchief as a token of her regard. Missed connections, parents who want her to marry locally and warn against the intentions of some Army officers, and dealing with those close to her who have suffered combat injuries conspire to drive her away from Jake. Only the letters they exchange seem to keep them connected.

Not long after the dance, Jake, who works under Captain Prescott, the quartermaster at Fort Riley, is assigned to duty at the frontier forts in western Kansas. There, many of the living quarters are more primitive than a Kansas soddie. Supplying the uniforms, supplies, horses and mules the soldiers need is challenging at best. In spite of the hardships involved, the Army is Jake’s chosen career. With his life constantly at risk, must he sacrifice his chance to share his life with the young woman who had won his heart?

Hannah turned seventeen two months earlier. For her, this dance would be comparable to a cotillion, or a coming out social such as she had read took place among the aristocracy in Britain or even high society in this country. This event would mark her entry into womanhood and availability to be courted. Since moving to Salina, she knew of a few local girls who married at her age. Hannah had no one she wished to marry at this time, but she was open to the idea, if she could find the right man.
However, her parents had let it be known they preferred she wait until she was a few years older to be courted. From comments made, she gathered they worried she would want to marry the first boy she felt attracted to, only to discover later, after it was too late, she did not really love him and had chosen poorly.
Hannah smiled at the thought. It was already too late for her to insist on marrying the first young man who had caught her fancy. For several years now, she found boys fascinating. A few of them had sent her giddy with infatuation. As much as she sought to spend time with them, she had not wished to marry any.
Hannah opened her carpetbag. She fingered the book but rejected it in favor of her latest embroidery project, a handkerchief she was doing in pink flowers and green stems and leaves. She had already rolled and hemmed the edges but had not yet crocheted a lacy border on it. She pulled out the smaller bag holding her project, her thread, and scissors, and forced herself to sit in the chair. Twisting to catch the light from the window, she continued the floral design on the third corner.
Perhaps after tonight, Mama and Papa will stop saying I need to wait until I’m older before I’m ready to choose a husband. After all, I’ve tried to show how willing I am to listen to them by being as obedient as possible.
As a thought struck, Hannah dropped her hands holding the project in her lap, causing her needle to prick her. She jerked her finger away and raised it to her lips to lick the drop of blood from her broken skin.
What if the reason her parents did not think she was ready to make her own decisions was because she always tried to be obedient? What if they believed, because she seldom acted independently, especially when it came to going against their wishes, she did not know how to think for herself? What if they thought she was incapable of knowing her own mind—knowing what she truly wanted from life?

The following are my books in the Lockets and Lace series:
Prequel: The Bavarian Jeweler
(Click on the book cover in the right sidebar to download your free copy)
Book 3: Otto's Offer
Book 19: Virginia's Vocation

Posted by Zina Abbott Author at 9:29 AM