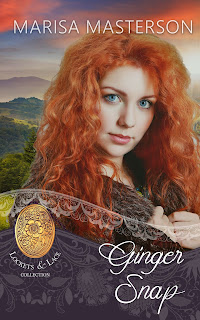 She's trapped in a lie to provide for her family.

How can God still love and bless her?

Ginger Snap is a story of a girl realizing her worth, both in the eyes of God and to the man who is drawn to her.

I've always loved the play, As You Like It, by William Shakespeare. Borrowing the idea of a girl forced to dress as a boy, I created a heroine, Ginger, who is forced to pose as her dead brother. For the first time in a long while, she is comfortable and well-fed--all because she's lying.

When Ginger overhears the plans of thieves, she runs for her life. Just when she'd hoped to appear at a dance as a girl. She'd like the new lawyer in town, Theo, to see her as a woman.

Will the lawyer be able to rescue her if she can't save herself? Can she trust the Lord to protect her even though she's broken a commandment?

With three cows to milk and two dozen hens, Ginger and Willard took milk, butter, and eggs into town twice a week. This allowed them to have luxuries such as sugar, something she’d rarely tasted at home in Tennessee.

At times, Ginger felt like an Israelite entering the land of milk and honey. With the plentiful food, she’d begun to round out. The bindings became a necessity now as her bosom developed. Ironically, she daily became more womanly even while Ginger pretended to be a man.

Things had never been better. So why did it eat at something deep inside of her?

Life, she was discovering, was funny that way. Her ma had taught her that liars and cheaters didn’t prosper, yet she and the others had never been better. And it was all because she was misrepresenting herself to the lawyer and the entire population of Kearney Junction each time she went into town.

Step Pappy, scamp that he was, had managed to set up a still soon after they arrived at the farm. He’d used the extra corn stored on one side of the small granary to cook up his mash. Since then, boys from town began visiting to drink and carouse after dark. It was another reason Wiley Snap was so jolly these days. He had a new bunch of young men to corrupt.

At home in the Hollow, she’d seldom went to town. Her family didn’t attend church, and she and her brother rarely attended school. Especially not after they were eight or nine. They could read enough and cipher some. It would get them by. At least, that’s what her father figured.

The family did own a large family bible, something Wiley Snap also sold in Camden. Ginger’s mother used it to further her children’s reading. Guy fidgeted and pleaded to go outside during those lessons.

Not Ginger. She read the scriptures faithfully. Verses she’d memorized came back to her lately. It was one more reason she knew that her deception was wrong. 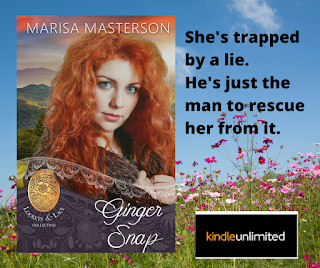 Email ThisBlogThis!Share to TwitterShare to FacebookShare to Pinterest
Labels: As You Like It, Ginger Snap, Lockets and Lace, Marisa Masterson, Nebraska