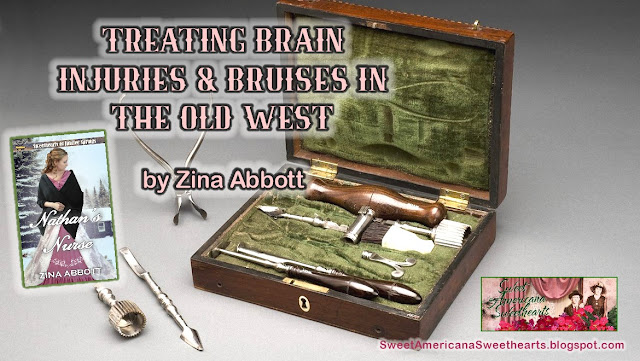 This is one of those blog posts where I need to start with a warning.

Some of the images you are about to see
may be disturbing for sensitive groups.

In Nathan's Nurse, my hero, silver miner, Nathan Price, suffers, among other injuries, a head injury when a crossbeam from a square set (often built in mines to help support the rock walls) glances off the back of his head. With only a mine dispensary in the remote mining community, no modern hospital with a sterile operating room, what was a doctor hired to treat broken bones, scrapes and bruises, and diseases related mining to do?

For my research, I relied heavily on two sources. The first was the book, The Doctor's Bag by Dr. Keith Souter who writes Western fiction as Clay More. although Dr. Souter is a medical doctor educated in modern times, his book focuses on the medical knowledge and practices of the nineteenth century.

In my story, I referred to two medical practices in use in the late nineteenth century. One was trephination (trepanning) to relieve pressure on the brain, and the other was the use of leeches to reduce the build-up of blood in large bruises.

Trepanning to relieve pressure on the brain is an ancient practice.  It was used from the neolithic period forward, both in Meso-America and Europe.

The Hippocratic Treatises make mention of trepanning in the chapter on injuries of the head, which states: ‘For a person wounded to the same . . . extent . . . will sustain a much greater injury, provided he has received the blow at the sutures, than if it was elsewhere. And many of these require trepanning.’

Galen also makes mention by explaining the technique of trephination and the risks involved to the patient:

For when we chisel out the fragments of bone we are compelled for safety to put underneath the so-called protectors of the meninx, and if these are pressed too heavily on the brain, the effect is to render the person senseless as well as incapable of all voluntary motion.

Trephination, or trepanning, is accomplished by using a trephine, or small circular saw with a center pin mounted on a strong hollow metal shaft to which is attached a transverse handle. It is used in surgery to remove circular disks of bone from the skull. 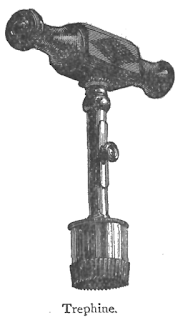 Dr. Souter's book also clued me into the use of leeches. Although the practice of using leeches to bleed patients to remove the "bad blood" that made them sick had been disproved by the latter half of the nineteenth century, leeches were still used to remove partially clotted blood from large bruises. (Quite frankly, these images of using leeches freaked me out more than the ones of cutting into the head.)


My second source of information was my own experience of learning more about my brother's condition after, as a child, he twice suffered from blood clots on the brain.

The first time it happened, he was two and a half years old. After being rushed to the hospital when he became unconscious for no apparent reason, the surgeons drained a blood clot found during emergency surgery. Because that condition was so unusual for a child that age, and because he fully recovered, nothing more was done.

When he was six and a half years old, after dragging his tricycle up the stairs to the second story of our home, he collapsed. After discovering a second blood clot, the doctors knew there was something else going on, and they performed exploratory surgery. This was in the 1950s, long before laparoscopic surgery techniques were developed.  They found an abnormal cluster of blood vessels that had weakened and burst, causing the blood to escape inside his cranium. Although they fixed it, the damage of that second episode caused my brother permanent brain damage.

As his thirteen-year-old sister, I had questions about the changes in my brother. I learned that parts of his brain dealing with his reasoning ability were affected, although the part dealing with memory was not. (My brother exhibited fantastic recall throughout his life. Within the months after his surgery, my father took him along when he visited construction sites or the homes of employees and work associates. Sometimes, my dad could not remember how to get someplace when he had been there only once several weeks earlier. My brother pointed out the way.)

My brother ended up being partially paralyzed on half of his body. I learned that the clotting on the left side of his brain affected the left side of his face and head including his left eye and speech. Due to the nerves crossing somewhere in the neck region, the right side of his body became partially paralyzed. He never did regain full use of his right arm and leg. Although he eventually relearned how to speak well, it sometimes took him longer to think through what he wanted to say.

The word "stroke" was never used in relation to my brother. However, that basically was what happened, not due to a build-up of plaque in the blood vessels and arteries that broke loose and blocked blood flow, but due to injury to the blood vessels  in the brain that drained the blood flow to the brain and resulted in a blood clot that put pressure on the brain.

I used this understanding gained from my experience of living with my brother in my book. My heroine, Dahlia, knew of a boy in her home town who suffered a brain injury when a child, and this boy never fully recovered. When she is confronted with taking care of Nathan, she also worries about his future.

“No doubt about it, Mrs. Price, he’s pretty battered up. As you can see, he suffered quite an extensive head injury. It might be hard to believe, but he’s doing better than he was. It surprised me when they first brought him to me. He did open his eyes and respond to my voice, although he could not answer my questions regarding his pain level. Not too long after that, he became totally unconscious.”


“That was when he went into a coma? Not as soon as he was injured in the mine?”
“That’s right. Don’t get me wrong—he was knocked unconscious when the wood beam first hit him, but he came to while they were bringing him to the dispensary. After he slipped into a coma after that, I suspected a brain clot inside the cranium…er, the skull…and called for Dr. Adams, here in town, to join me for a consultation. He agreed. Fortunately, he has a trephination saw. So, while I stayed and set bones on one of the other miners they brought in, he went back to his office to collect his saw and his medical book on the procedure for us to review before we started cutting into his cranium.”

Dahlia pressed a forearm to her stomach to prevent the bile she felt forming there from rising in her throat. “You cut into his head?”
“Yes. It was the only way to drain a blood clot that had formed inside his skull. It’s kind of like how apoplexy works. If too much blood presses against the brain and nerves, it can cause considerable damage, even death.”
As she absorbed this new information, Dahlia stared off to the side. “Oh. I had no idea.”
“You need to be aware, Mrs. Price, that we removed a small disk of bone from the skull. After we drained what we could, we washed it in a mild carbolic solution to prevent infection and put the bone we removed back in place before we closed the skin and sewed up the incision. Dr. Adams and I debated about leaving it partially open so the bleeding in the brain and beneath his skin could drain. We decided, due to the dust that exists around the mine and its structures, to close it up. Instead, since neither he nor I keep leeches, we contacted the railroad construction crew doctor. He sent a couple down. I used them the next day to keep the blood build-up down and prevent too much pressure on that piece of bone we reset in his head.”
“I-I didn’t know they still use leeches.”

Dr. Sprague shrugged. “Not as much as they used to, since most physicians no longer believe routine bleeding is beneficial. The railroad doc keeps some on hand because, for one reason or another, the men he treats frequently get into brawls.

Leeches are useful for removing excessive blood from black eyes and other large bruises. Head injuries are known to bleed a lot. So, I was grateful when he sent them down for me to apply to the swelling on the back of your husband’s head. We just need to watch that area. He may end up with a slight indent in his head if the piece of bone we removed gets pushed in too far as it heals. Or it may bulge out a bit. The main thing is to keep the brain healthy and his head free from too much swelling, both from blood accumulation and infection.”
Dahlia huffed out a breath and looked off to the side, already feeling drained and incompetent to handle the challenge of providing proper care for her new husband. Nathan’s injuries were far more extensive than Royce Bainbridge had led her to believe. However, if she had not agreed to take on his care, who would have?

Nathan's Nurse is the second book in the "Train Wreck in Jubilee Springs" trilogy. The first book is Two Sisters and the Christmas Groom. In spite of its title, Two Sisters and the Christmas Groom does not focus so much on a Christmas theme that you will feel like you are reading the book out of season if you read it now. Likewise, although some scenes in Nathan's Nurse include Christmas Day, the story continues into the new year of 1882.

You may find both books by clicking on the hyperlinked titles above. The third book will not come out until later in 2020. 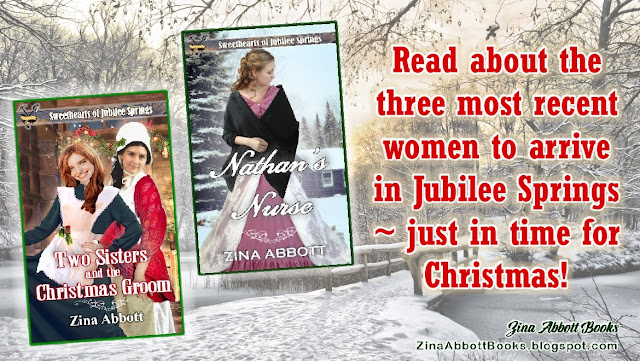