From the earliest of times, mankind has had a wanderlust, a need to see what’s over the next hill or if the next valley might be greener than the one they’re in. But those men—and the few women—who have traveled over great distances always proved few and far between before the development of travel.

Before the Nineteenth Century in the United States, most folks spent their entire lives within twenty miles of where they were born--the distance a wagon could travel in a day with dry weather conditions and rested draft animals. A horse and rider could do twice that in a hard day, but only a fool or desperate man would push his mount that hard too many days in a row.

Roads posed the biggest problem, usually nothing more than raw cleared, traffic-packed. They soon became rutted and easily washed out in hard rains. But in the first twenty years of the 1800s, men in the New England area built thirty-seven hundred miles of toll roads. And little by little, with the additions of good base and top gravel or bricks, country and town roads improved as well.

Every family, with the possible exception of those who lived right ‘in’ town, had a wagon to get around. They'd ride into town for supplies, go visiting a neighbor, or take the family to church on Sundays. Harnessed horses or mules usually pulled those wagons along. The better the roads got, the faster they could get from one place to another.

As more and more people came to America from all over the world, many wanted to move further out from the crowded New England states, out where they could buy land cheaper, settle on it and farm it. Or if they went far enough, they might get a grant and claim a piece of it for their own. Many of the territories and places like the Republic of Texas offered free land to attract the pioneers. 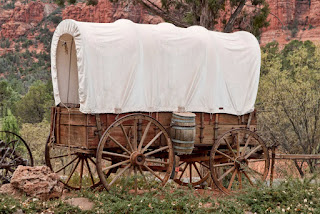 To travel those long distances to new territories, wagons needed to be bigger and have shelter from the elements, so metal frames were attached, and thick canvases pulled over them. The 'cover' protected not just the travelers, but all their supplies—food, water, furniture, and tools—necessary for the journey then setting up new homes once they arrived.

The wooden wagons were typically four feet wide, ten feet long, and its canvas gave the travels seven to eight feet in height. Some might be as wide as six feet and as long as fifteen feet. Not very much room to store all the provisions pioneers would even need for the trip, much less once they arrived at their destination. 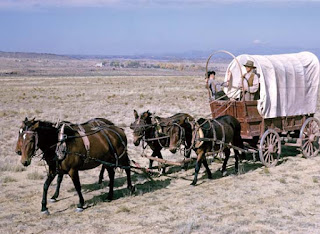 Once the traveler acquired a wagon, he needed something to pull it. Horses had been used mostly on the farm, and they were fast, but required extra grain. That grain would take up too much valuable space in the wagon. Plus, they weren’t as sturdy as mules who could travel twice the distance in a day—twenty miles.

Mules though were often obstinate and would bolt at times, but for the treacherous climbs proved more surefooted. Mules did need some grain—not as much as their equine cousins though, and Indians didn’t steal them as often as horses. And they could take the heat better than the third option to pull the wagon . . . a team of oxen. 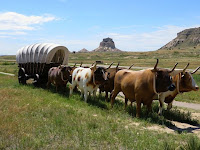 Now oxen were strong and sturdy and could subsist longer on poorer grasses. They were slower at fifteen miles a day, but almost never ran off or got stolen by natives. The favorite of most emigrants, oxen pulled one-half to three-quarters of the wagons going west during the mid-1800s!

As for cost, mules brought the highest price, then horses, and the oxen were cheapest at twenty-five to sixty-five dollars per yoke (two animals).

A prudent man would do his best to have seven yoke to pull his wagon, starting out from Missouri traveling the Oregon or California Trail.

Why? Because many would die on the way. Those would be eaten. But a wise man would have enough animals to get him all the way, over two thousand miles of rugged terrain, across rivers, and over mountains. The sojourner who traveled so far in a covered wagon embodies the essence of the American spirit.

I rode the Oregon Trail last year and blogged about my journey. If you like covered wagons, you might enjoy those. Here's the first: Carylin' On the Oregon Trail Day One  To read more, search for that same title (without the 'Day One'). 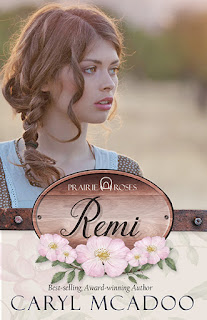 GIVEAWAY: As a special gift for my readers today, I’ve arranged for my Prairie Roses Collection story REMI to be free at Amazon. It’s a wonderful story of romance, hardships, and tragedy along the Oregon / California Trail in 1851. I hope you enjoy it and will share the link with your friends!

Caught between a wagon train and the deep blue sea, Agnes Remington Dalrumple--Remi for short--chooses the overland journey west over crossing the Atlantic with her mother and step-father. Though she’s never been on her own, she decides to go to California and try to find the father she’s never known.

Thwarted at every turn, almost every effort is dashed until a widower’s thirteen-year-old daughter intervenes on her behalf. How can the headstrong woman place herself under the responsibility of the young girl’s father, a perfect stranger? But if she doesn’t, her journey ends right there in Saint Joseph, Missouri. On the Oregon/California Trail, will her pride and independence deter her from the destiny God has prepared?

Asher Adams, a widower with two daughters and a desire to start anew has sold everything he owns and is headed to California with his recently wed sister and her husband. She and his girls conspire every step of the way, hoping he will find someone to be a companion and friend. Remi fits the bill as far as all the women in his life are concerned, but is it too soon?

REMI--while both are stand-alone books, continues the story of UNIQUELY COMMON with the same characters but different hero and heroine. Readers will enjoy reading both!

Bio: Award-winning author Caryl McAdoo prays her story gives God glory! Her best-selling novels are blessed with a lion’s share of 5-Star ratings! Her forty-nine titles surely do just that as Caryl’s faith and trust in God shine through her characters who readers love.

She enjoys writing as well as singing the new songs the Lord gives her—listen to a few at YouTube. With husband Ron, she produced four children who’ve given her eighteen grandsugars. The McAdoos live in the woods south of Clarksville, seat of Red River County, in far Northeast Texas, waiting expectantly for God to open the next door.
Posted by Caryl McAdoo at 3:00 AM