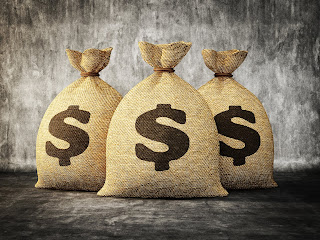 We've all heard the saying - money makes the world go around. Well, it might not, but it does move the people around. Yes, as the Bible says ~ the love of money is the root of all evil ~ yet, we do need money to get along in this world.

The need for money to purchase food and housing is a great motivator. Would I have 50+ books written if I didn't need to pay bills? I'm not too sure, but I would have to guess the answer would be no. And I love to write.

But today, I'm interested in the history of money in the United States. Today, we can go without handling a dollar. For most of us, our money is a digital number that comes and goes as we earn and spend. Hopefully, our earning is larger than our spending.

The Continental Congress issued the first currency for the new country. Times were hard and it was backed only by future revenue from taxes. And the phrase, not worth a continental became commonplace.

In 1785, the congress named the currency of the United States ~ the dollar. The first US Mint in 1793 made our coinage.

But things got carried away and soon there were state-chartered banks with their own currency and over 30,000 different colors and designs of dollars and coins to contend with.

Before the civil war, the Treasury issued Demand Notes and a few years later, the Greenbacks which were to use green ink to prevent counterfeits. The Secret Service was put in charge of controlling counterfeits.

In the frontier, people bartered with furs, gold dust and nuggets until civilization caught up. And with the gold strikes it didn't take long.

Thanks for stopping by for a little history of U. S. money.
Have a wonderful day.
~~~
You can find my books on Amazon ~ Patricia PacJac Carroll
My latest book is Jericho. 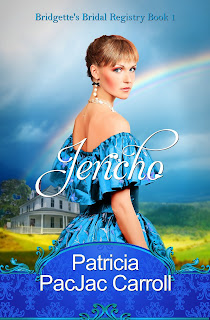 A stained woman trying to find her wings. A reformed outlaw trying to make his second chance a reality. Together, can they forget the past and forge a future together?

She’s the first of Bridgette’s Bridal Registry. Bridgette is looking to match up brides for her Bounty Brigade graduates who have turned from a life of crime to become upstanding citizens of Shirleyville, Montana.
Del Selmer has served his time and is now ready to use his carpentry skills to help build the town. But he wants a wife and to start a family.
Bridgette has sent out ads in various newspapers throughout the country and has a few respondents.
Jericho has a past of her own. Can Del break down the walls she’s put up around her heart?


Posted by Patricia PacJac Carroll at 6:57 AM