Settling in Texas by Abagail Eldan

The first true German immigrants in Texas were Johann Friedrich Ernst, the "Father of German Immigration to Texas," and Charles Fordtran. A few years later, in 1842, the Adelsverein was formed for the purpose of promoting German immigration into Texas. Some came to escape religious persecutions, others because of political problems in Germany, and still others came looking for better opportunities. (see Lonestar Genealogy)

My Brokken books are populated with German immigrants. The series is set in Brokken, Texas, the small Texas town founded by Franklin Brokken, a descendant of Wilhelm Brecheisen whose surname means “breaker of iron” in German. Not long after Wilhelm arrived in America, he became involved in a fistfight with a fellow German, a man named Frederick Eisen, whose name means "iron." When Eisen landed a blow and Wilhelm fell, breaking his hip in the process, one of the onlookers said, “The iron has broken the iron breaker.” And just like that, Brokken became Wilhelm’s last name. He cheerfully accepted the Americanization of his name but added the K, right in the middle. The K, he told his family, stood for kein, which means“not” in German. He declared to all who would listen that he was not broken. And he set out to prove it, soon becoming one of the richest men in Pennsylvania.

Beginning in This Brokken Road, we learn a little about the three sons. Many of the businesses in the town are owned by the Brokkens, and one of their businesses, the Brokken bank, is robbed by the owners themselves. In Brokken Brother we discover why.

In Brokken Redeemed, the tale of the Brokkens continues with Deborah's story. When the town is attacked by a group of outlaws, Fritz bears the brunt of the blame for the destruction that ensues.

Disillusioned, outcast by his own family, and his engagement broken, Fritz is given a mission--find the mother of Sally Jane whose grandmother was killed in the fiasco.

In Brokken Promises, Fritz sets out on his journey, unaware of the repercussions from his lies and the broken promises he has left in his wake.

His search leads him to Camellia Jenkins who harbors deep secrets. She is barely able to keep body and soul together and returns to Brokken, Texas with Fritz who promises to help her.

When her secrets are revealed, will Fritz stand by his word? Will keeping promises break him further... or make him stronger?

Brokken Promises is the latest in the Brokken Road Romances. 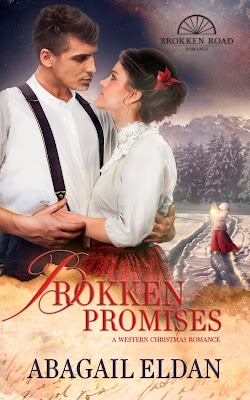 Wishing you a Happy New Year! 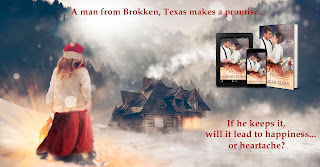 Posted by Sheila Hollinghead at 5:30 AM