The Feat of Building the Transcontinental Railroad


While researching my last release, GRAYSON, book 8 in the Bachelors and Babies series, I read a non-fiction account of the building of the Transcontinental Railroad titled Nothing Like it in the World by Stephen E. Ambrose. Although long at more than 400 pages, I was captivated at the recounting of how visionaries like Abraham Lincoln (who served as a railroad attorney before running for president) and Grenville Dodge recognized the need for travel between the coasts. This in-depth look at all factors involved (companies, tent cities created, Indian attacks, accidents, blasting through blizzards, leaders, directors) reads like a suspense novel.

What I hadn’t known was how the U.S. government pitted the two companies, the Union Pacific and Central Pacific Railroads, against each other through the offer of incentives (money and land) granted for each mile of track surveyed, graded, and laid. Even if all involved knew the value of a solidly built and reliable railroad, the pressure was on to build it fast. Not only were the investors anxious to see a return on their money, but the idea of fast travel captured the public’s interest. Correspondence (mostly in the form of telegrams) between the principals demonstrated they were willing to lay down the track then come back later and reinforce it to last. An endeavor this large involved approvals at the congressional level and backroom deals were made because senators from the affected states wanted the line to benefit their constituents as much as possible.

In that kind of atmosphere came unscrupulous behavior. Several board members from the Union Pacific Railroad formed a separate company, Credit Mobilier, that handled the bids for work and received the government payments. Skimming off the top to benefit the investors occurred which increased the costs of the actual construction.

Several years ago, AMC ran a five-year series titled “Hell on Wheels” (which I loved) that depicted the building of the railroad. As I watched it, I was caught up in the dynamics of the characters and their struggles and motivations. Then when I read Nothing Like it in the World, I realized how accurate the series was and recognized the names of real-life people being featured. If you haven’t seen the series, I highly recommend it. Who else saw that series?

BLURB: A year ago, lawyer Grayson Wainwright's brother was killed due to faulty metal bridge braces. When Grayson files a wrongful death case against a company accused of supplying shoddy materials to the Transcontinental Railroad, he relishes his chance to achieve justice. Grayson’s two witnesses intimately know the accused, Leary Riddock--one is his wife, Loraine, and the other is his secretary, Catalina del Mar.


Catalina and her husband, Joaquin, moved west from Omaha, working at various jobs for the Union Pacific. But when their infant son died, Joaquin abandoned her in Cheyenne, and Catalina was forced to support herself. She became a bookkeeper in Riddock’s construction company and soon learned her boss was not a legitimate businessman. As soon as the facts are revealed about Leary’s embezzlement, she agrees to serve as a key witness.


Then Loraine is killed right before she is scheduled to testify, and threats prove Catalina is next. Now with an orphaned infant on his hands, Grayson must move heaven and earth to protect his beautiful remaining witness…and his heart.


I’m promoting new followers to my BookBub author page today through noon tomorrow here. Sign up as a new follower and be eligible for a chance at a $5 Amazon card. 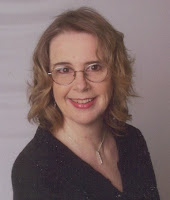 As a child, Linda was often found lying on her bed reading about characters having exciting adventures in places far away. In later years, she started writing romances and achieved her first publication--a confession story. Now Linda writes heartwarming contemporary and historical stories with a touch of humor.

Posted by Linda Carroll-Bradd at 1:12 PM

Email ThisBlogThis!Share to TwitterShare to FacebookShare to Pinterest
Labels: @lcarrollbradd, Bachelors and Babies series, Grayson, Hells on Wheels, Nothing Like it in the World, Stephen E. Ambrose, Transcontinental Railroad