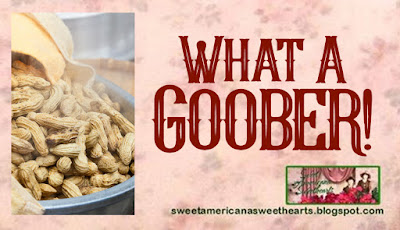 When I grew up.. the only Goober I knew was Goobers... the Chocolate Covered Peanuts at the movie theater. Sadly those were never a big favorite of our family...

But after I had my son and our family moved to Las Vegas, NV (which is considered the 9th Hawaiian Island), we started attending and participating in Civil War Reenactments.

Along with sewing our clothes and all the other fun, one of the things I enjoyed doing with my son was learning songs of the era. Still to this day, (he's 22) we sing them from time to time.

One of our favorites is "Goober Peas" -

Here's a link to the song performed by the Second South Carolina String Band... they have a great version and my son and I sing along in two part harmony. There are worst things to share with your children than traditional songs, which were a family and community past time in the era...
No cellphone back then... *wink*

The lyrics march along during the song and even without the jaunty instrumental background, I could see this song being a fun song to march with... even if you need to spare your breath you can hear the song in your head...

Sittin' by the roadside on a summer's day


The subject is most interesting but rhymes are mighty rough
I wish this war was over, when free from rags and fleas We'd kiss our wives and sweethearts and then we'd gobble goober peas

Like a few of the other Civil War songs, other verses were added to the song but have fallen away from favor... or perhaps they'd rather not sing them. I've seen a version of an extra verse likely written while solders were in a Union Prison Camp. Again, songs were used to bolster spirits in dark times, so I can image the need to add a new verse to comfort themselves in camp.

But.. what are these... Goober PEAS?
Boiled Peanuts!!

This unimposing little nut became a staple for Southern Soldiers as the war wore on... if you'd like to do a little reading on it.. there's an excellent online article by the Smithsonian!

I hope you'll take a listen to the song and maybe use the lyrics to try to sing along... I think you'll find it's easy to pick up the melody :D
Posted by Reina Torres at 4:39 AM