Housekeeping in the 19th Century

Housekeeping in the 19th Century 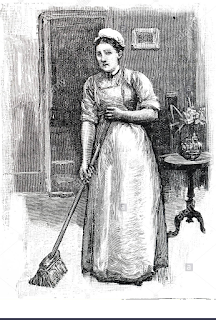 After the famine struck Ireland in 1847, millions of Irish immigrants landed on America’s shores.  Many of them were women, young and unmarried.  In fact, it was far easier for a single woman to get a job in America than a man–because there was a huge demand for domestic servants.
In England and America in the 19th century, housework was incredibly laborious.  If you could afford it, you got a servant.  A household with just one servant had what was called a “Maid-of-all-Work,” a lone woman that was responsible for all the cooking, cleaning, and general maintenance of the members of the household.  If you had more money, you could get a cook, a housemaid, a lady’s maid, a butler, and a valet.  Some households were even so large there were complex hierarchies among the servants.  Even the servants had servants.
Domestic labor provided an open door to new Irish immigrants–they could get a job almost right after they landed and room and board was included, which allowed them to save money and send it home.  Often, after they married, they would leave service to manage their own households and raise their own families.
But did the next generation, the American born daughters, follow in their mother’s footstep and go into service?
No.
Because being in service was terrible. 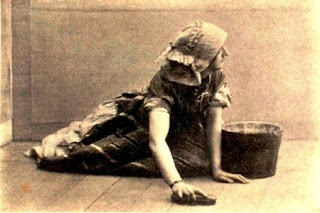 The servant we know the most about is an Englishwoman named Hanna Cullwick.  She entered service at the age of 8, and remained a servant until 65.  She kept a diary of her daily doings from her mid-twenties to her mid-sixties–from about 1853-1893.  A typical entry looks like this.
Opened the shutters & lighted the kitchen fire.  Shook my sooty thing in the dusthole & emptied the soot there.  Swept & dusted the rooms & hall.  Laid the hearth and got breakfast up.  Clean’d 2 pairs of boots.  Made the beds & emptied the slops.  Clean’d and washed the breakfast things up.  Clean’d the plate, clean’d the knives & got dinner up.  Clean’d away.  Clean’d the kitchen up; unpack’d a hamper.  Took two chickens to Mrs Brewer’s & brought the message back.  Made a tart & pick’d and gutted two ducks & roasted them.  Clean’d the steps & flags on my knees.  Blackheaded the scraper in front of the house; clean’d the street flags too on my knees.  Wash’d up in the scullery. Clean’d the pantry on my knees and scour’d the tables.  Scrubbed the flags around the house & clean’d the window sills.  Got tea for the Master and Mrs. Warwick…Clean’d the privy & Passage & scullery floor on my knees.  Wash’s the dog & cleaned the sinks down.  Put the supper ready for Ann to take up, for I was too dirty & tired to go upstairs.  Wash’d in a bath & to bed.

It's thanks to her tedious diary that we know anything about a typical servant’s life.  But the reason she kept this diary at all is quite interesting: for 36 years, she secretly dated then married her employer, Arthur Munby. The diary was for him. 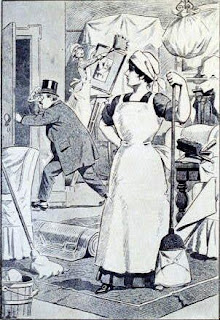 My latest release is on sale for 99 cents.  The Marshal's Mission. 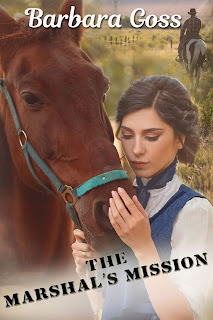