The Most Iconic Image of the Old West 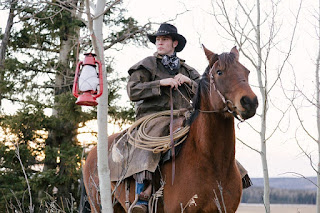 When someone says the Old West or cowboy immediately an image jumps into our minds. It's the image of a man, either sitting on a horse or standing straight and tall. At least that's what pops into my mind. What is it that sets this person off from all the other images of men? It's his hat.

And what's the most famous, and the first true cowboy hat ever invented? The Stetson of course.
John B. Stetson was the son of a hat maker in New Jersey. He invented the hat we know as a cowboy hat while panning for gold in Colorado in the mid 1860's. He couldn't enlist in the military because of his ill health. While there, Stetson made a hat from felted beaver fur with a wide 4" brim, an insulating airspace above the head, and was waterproof so it could be used to carry water. His companions laughed at the results, but Stetson wore it for the rest of their trip.

Stetson returned to the east in 1865 and with $100 worth of tools and felted fur began making the hats. Easterners weren't impressed with the hats of such a strange design. Stetson sent samples of the hats to every Western-wear merchant he could with a blank order form included with each hat.

Orders poured in even though the hats were expensive. Only two styles and two colors were available of the Boss of the Plains. Black and pearl-gray with different widths of the brim. Texans preferred black with a wide brim, and Montana cowboys opted for pearl-gray with a narrower brim that wouldn't blow off as easily.

The wide brim of both styles kept the rain from running down the cowboy's neck as well as shielding the face. Cowboys could, and did, personalize the hats using steam. They'd crease the center of the crown and dent in the sides making it their own. The felted fur, steamed and modified as desired, held it's shape for years. 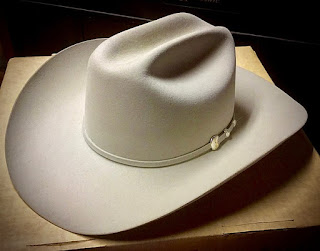 John B Stetson gave us the single symbol that epitomizes the Old West and cowboys to this day.
Posted by Sophie Dawson at 12:00 AM