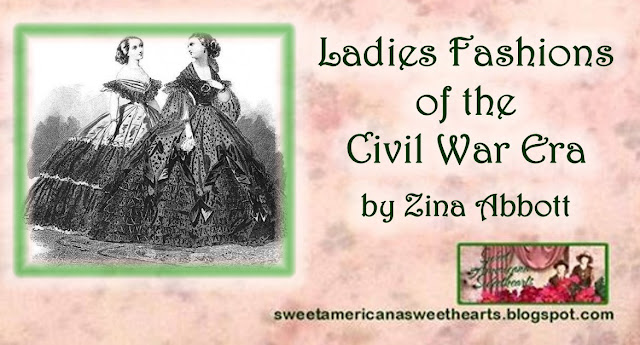 Many of us authors love to write books about women who dress in men’s clothing for either comfort while performing outdoor tasks, or because they are trying to pass themselves off as men. Although there are documented cases of women who often posed as men in order to fight alongside their husbands in the Civil War, and others of women who did so because of the extra freedoms and privileges afforded men, most women would never deviate from a form of dress that would mark them as less than a lady. There was a great deal of social pressure put on women to look, dress and act like a lady. 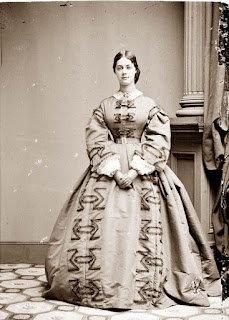 One of the measures of beauty for this look was to appear to have a small waist.  To this end, women constructed gowns to accentuate this feature.  The jewel neckline and center front openings were universal. 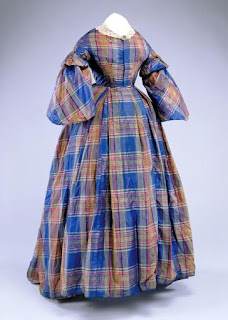 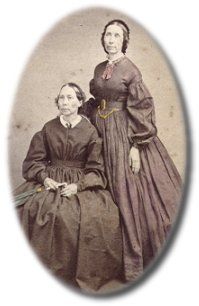 Gone with the Wind to the contrary, this was not the era of corsets being tightened to the point of permanent injury belongs to a later era, not the civil war era. Since gowns were designed to accentuate the smallness of the waist, tight corseting was not needed.

Jewel necklines were universal and when visible were finished with an edging of piping or tape. Most necklines were enhanced with a removable white collar. Collars were basted in so that they could be removed from the dress for laundering. The exceptions were black collars for women in mourning and an occasional upright or frilled collar. Collars were generally enhanced with a brooch at the throat or a nice ribbon tie.

Day dresses for ladies typically had long sleeves and a high neckline and were most often made from cotton, fine wool, or silk. 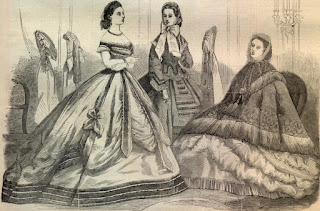 An evening or ball gown would have very short sleeves, often small puffs, and an open neckline and would be made out of silk or other especially fine cloth. Many were an off-the-shoulder style.

Most bodices were fitted closely to the torso with darts from the waistband up to the bustline. Also, note the style of darts used. By angling the seams, they add to the look of a smaller waist. 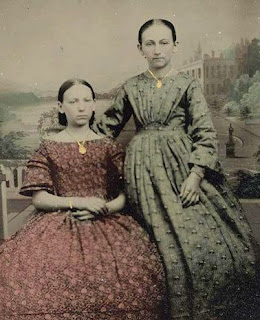 Other bodices were gathered or tucked for a looser fit. Shoulders were cut very wide and extended down the arm to a dropped armscye. Bodices were generally constructed separately from the skirt, then basted to the waistband of the skirt to make the dress. Other bodices were sewn to the skirt with a single waistband, more practical for those who are active. Bodices closed with a center front opening, using hooks and eyes or buttons. Bodices were lined to give them body. 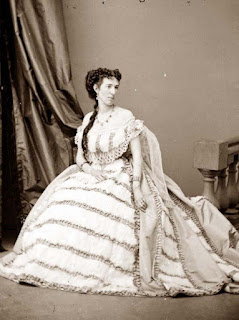 Fashionable skirts were as wide as possible, this width was accentuated with the support of hoops or multiple starched petticoats. With a very few exceptions, no trim was applied to the skirt. Skirts were not lined, nor were they hemmed as we do today by turning under a portion of the fashion fabric. Hemming was done by applying a wide band of fabric (old dress fabric, muslin, even flour sacks) to the underside to give the skirt weight for a smooth fit. This hem band was usually quite wide-6 to 12 inches were the norm. Tape was often sewn into the seam between skirt bottom and hem band to prevent wearing of the fabric edges. 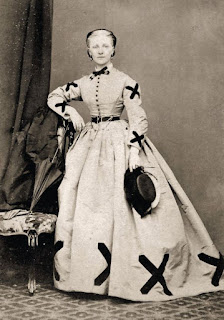 Skirts were fashioned to be very full, and that meant a lot of fabric must somehow be gathered up into the waist band with minimal bulk. Generally, knife pleats of various widths were used to fold the bulky fabric into a smooth line at the waist. The knife pleats were directional to the front of the skirt, where they formed an inverted box pleat. 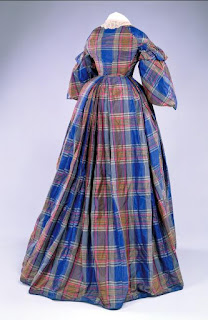 However, as the Civil War progressed, skirts became less full. By the late 1860s, the fullness of the skirt began to move to the back of the dress forming a sweeping train. By the 1870s, the bustle replaced cage crinolines as the most popular feminine shape. You can see how the style of this plaid wedding dress from the 1860’s shows the start of a bustle.

Kizzie in Kizzie's Kisses was my Civil War era heroine who opted to wear an old pair of her brother's clothes when riding her horse or working in the barn. Only when an officer's wife insists on dressing her up for a dance to celebrate the end of the Civil War does she put on a beautiful ball gown of the era. You may find out more about Kizzie's Kisses by CLICKING HERE

I have three novellas in the Sweethearts of Jubilee Springs series available. 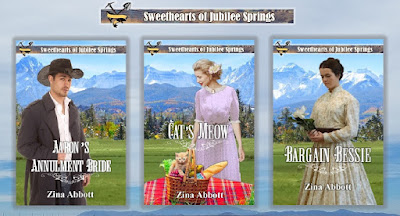 
~o0o~
To read and enjoy all of the books in the Sweethearts of Jubilee Springs series, please sign up and follow us on Amazon by CLICKING HERE.

And, we would love you to follow Sweet Americana on Twitter by  CLICKING HERE.
Posted by Zina Abbott Author at 1:00 AM