Where the Buffalo Roam ~ Or Bison

Buffalo ~ no other animal symbolizes the American West better than the Buffalo. Or to the technical scientific types - Bison.
This brings to light the clash
between history and modern science and nomenclature.

But then the word buffalo evolved from the French trappers who called them Beofs - meaning oxen.

Even if the thing is a Bison, it will always be a buffalo to me. After all, Where the Bison roam is just not as catchy as buffalo.

And there is the song Buffalo Gals, certainly much better than Bison girls.

We love the word Buffalo!!!

And then there are the buffalo hunters, and the famous Buffalo Bill. Can you imagine calling him Bison Bill. No me either. 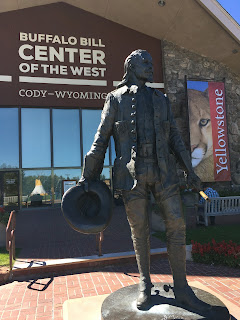 If you are ever in Cody, Wyoming, take time to visit the museum. It is amazing and has rooms and floors of historical items from wildlife, exhibits about the Indians, a large collection of guns and rifles. (My husband loved that room.) And of course about Buffalo Bill and his Wild West Show.

Experts estimate that there were 60 million buffalo before the 1800s by 1900 they were down to 300 and almost gone. Today their numbers have increased to half a million.

I find it fascinating to think about such a large animal numbering in the millions and covering states. That had to be a truly amazing sight.

The buffalo figured prominently in the history of our country. They were a major food source for the Native Americans. Because of the war against the Native Americans, the military wiped out many of the shaggy beasts to help defeat the tribes.
They were also killed for meat to feed the railroad workers, and for their shaggy coats.

We can all be grateful for those who saw the near extinction and strove to save the American buffalo. Early ranchers were the first to begin trying to save the animal from extinction.
But in a twist of fate, it was Buffalo Bill Cody who probably had the greatest result in saving the beast through showing millions live buffalo in his Wild West Shows.