*Practical* Knowledge of the 1800s 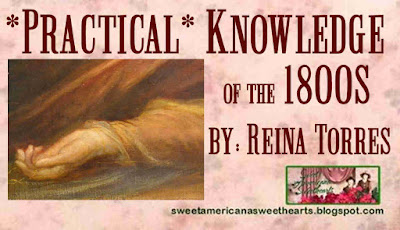 (necessary disclaimer... because I need you to know 1) I have NOT tested this receipts/recipes/helpful hints so if you want to try them out I can't say how they'll turn out or even if they are safe to try (these were from the late 1800s where things like asbestos were 'amazing' things and 2) receipts is an antiquated form of the word recipe and what it's called in these period books, so that's why I use that word to describe them)

Along with the instructions on starch for clothing and jams, or a stew, you might find such practical information as to how to revive a drowned person... or aid someone suffering with Cholera. In the 1800s they didn't have the corner 24 hour drug store, or urgent care. EMTs? Nope. Sometimes the only people they could count on to 'save' those they loved... were themselves.

These two gems were included in one of my bound editions of a Ladies Magazine from the late 1800s...

What would you think of these instructions?

To Recover Drowned Persons. – First empty the stomach, etc., of water. To do this, place the patient face downward, put a roll of something hard under the pit of the stomach, so that it is above the level of the mouth, and then press with force on the back. Afterward, to set up artificial breathing, instead of the partial rolling of the body, or the pumping action of the arms, now practiced, lay the body upon the back, with the clothes stripped down to the waist. The pit of the stomach is now raised to the highest point by something under the back. A bundle of clothing, or the body of another man will do for this. The head is thrown back, and the tongue must be drawn forward by an assistant, so as to keep open the entrance to the air tubes. The hands are passed above the head, the wrists crossed, and the arms kept firmly extended. In this position the chest is fully expanded. The operator then kneels astride the body, places his hands on the lower part of the ribs, and steadily and gradually makes compression. Balancing on his knees, he inclines himself forward till his face nearly touches that of the patient, and so lets fall the whole weight of his body upon the chest. When this had yielded as much as it will, he throws himself back by a sudden push to his first erect position of kneeling, and the elastic ribs, by their expanding bellows action, draw air into the lungs. These maneuvers must be repeated regularly, twelve of fifteen times in the minute.

Interesting, yes ?  Misguided? I wouldn't know... but keep in mind that I have NOT tried either remedy.

Next month... I'm going to give you the option... What would you like to learn about Receipts/Recipes for Meat? Vegetables? Or... do you want to know how readers of this ladies magazine learned how to remove RATS from their homes?