For my latest novella, Perfectly Mismatched, Book 1 of Sweethearts of Jubilee Springs, I started out to research parlor games from the 1870s-1880s to discover an activity the mail-order brides and prospective grooms could participate in. Like we in contemporary times might play the game where a name is pinned to your back, and you have to guess who it is. 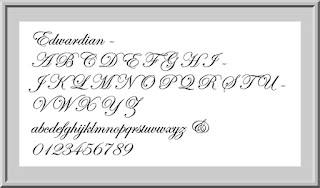 What I learned is that graphology, or the analysis of handwriting, was quite the rage during Victorian times. As was phrenology, which is the interpretation of the bumps on a person’s head, and was used in psychiatry.  Many claim both to be only pseudo-science--but much of that was discovered long after the times when people enjoyed the practices as entertainment.


Graphology consists of a system of comparative analysis made on specific letters: a, e, g, I, m, o, p, t, w, and s. A person writes the two words: ‘two magpies’, and the “expert” pulls from the writer’s handwriting style differences in temperament such as: being shy or gregarious, being sedate or physically active, if the person is an attention-seeker, fears success, have an upbeat or downbeat personality, generous or stingy, etc.

As I read about the study, I envisioned how a person could use a newly acquired skill like this to set herself apart as a matchmaker, hoping to give herself an edge over the competition. Mail-order bride agencies and newsletters were used on a regular basis as a way to entice women to relocate to the western part of American. In my story, the matchmaker who has been hired to provide brides for bachelor miners in a Colorado town feels she has a way to pre-determine which men and which women might be good matches based on similarities she sees in their handwriting. But as with all stories, everything doesn’t go as planned.


Tagline: Running from the past to a new home and name, she runs into a man who follows the rules to the letter.


I’d be interested to hear your thoughts about if handwriting can reveal personality traits. One commenter’s name will be chosen on Sunday, June 25th at 3PM, to win an electronic copy of any backlist title.
Posted by Linda Carroll-Bradd at 3:30 AM