The Man Who Invented Santa Claus - by Jo-Ann Roberts

I have been in full-on Christmas mode since my trip to London in mid-November. Everywhere we visited, from Kensington Palace to the Cotswolds to Covent Garden to the many Christmas markets, the streets and store-front windows were decked out in Christmas finery.
So as soon as the last slice of Thanksgiving turkey was devoured, Papa Bob and I went up to crawlspace (it's what they call an attic in North Carolina--not tall enough to be a room or wide enough to be a shed) to bring down the decorations.  When I opened the tote containing the many boxes of Christmas cards, an image of a vintage St. Nicholas stared back at me.
This got me to wondering how that vintage image morphed into today's Santa Claus.

Thomas Nast, America's most famous 19th century political cartoonist and the creator of the image of Santa Claus as we recognize him today, was born in 1840 in a military barracks where his father was a musician in the Regimental Bavarian Band. The elder Nast, while not an agitator, was a man of liberal ideas. In view of the political turmoil prevalent in Germany, his commandant suggested America might be a better place for a man so fond of free speech.
When Thomas was six years old, his mother brought him and his sister to the United States and settled in New York. Serving out his enlistment, his father followed four years later.
While not a good student, Nast showed an interest in drawing, preferring doodling over doing his schoolwork. At 13 he dropped out of regular school, enrolling in the National Academy of Art. But when his family could no longer afford his tuition, he went to work, creating illustrations for Frank Leslie's Illustrated Newspaper.
In 1862, he joined the staff of Harper's Weekly as an artist. Anxious to join the Union Army, his request was denied after President Lincoln described him as the "best recruiting sergeant" for the Union cause because his sketches encouraged others to join the fight. 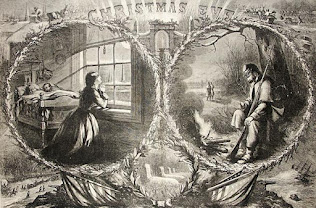 One of the most inspiring pictures was "Christmas Eve", a double-circle picture that shows a soldier's wife praying for his safety and in the next circle shows the soldier seated by a campfire, looking at photographs of his family. In the right corner of the drawing Santa Claus is shown riding a sleigh pulled by reindeer. And in the left corner, he is shown climbing down a chimney. 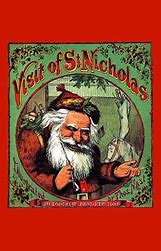 In the past Santa Claus--or St. Nicholas, as some continued to call him--was presented in various ways, but Nast conceived and introduced our modern image of Santa Claus.  His illustration, along with Clement C. Moore's very popular poem, "A Visit from St. Nicholas", helped create the modern image of Santa Claus.
For the next thirty years, he continued to draw Santa changing the color of his coat from tan to the red he's known for today. 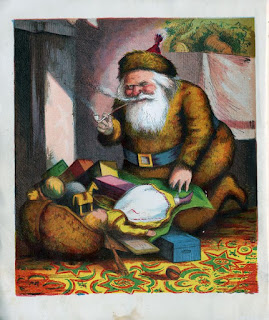 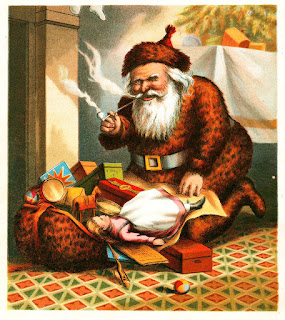 His image of Santa Claus was the inspiration for the Coca Cola' company's Santa Claus.
In 1885, this advertisement of Santa Clause delivers Ivory Soap for Christmas. 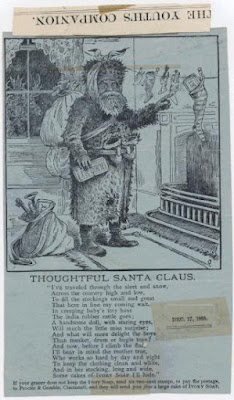 Courtesy of Proctor & Gamble
As the years passed, Nast added details of the story of Santa's life through his illustrations. It is believed that the story about Santa Claus living at the North Pole may also have been a Nast creation.
Whether you call him St. Nicholas, Father Christmas, or Santa Claus, the modern image of Santa as a jolly, benevolent, plump man in a red suit is a combination of creative of creative influences of authors and illustrators, and it is an image that is loved and recognized by children and adults alike around the world. 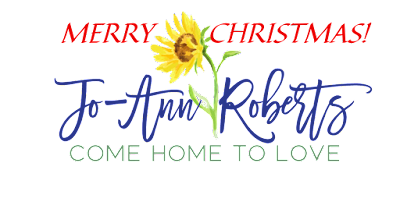