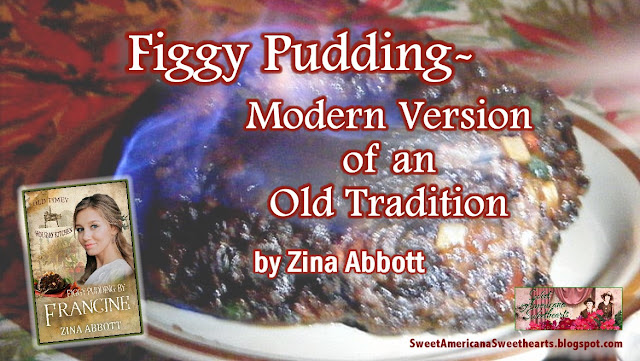 I will start by saying “Happy Anniversary” to my parents, who were married on this date within months after my father returned from his Army Air Force service in World War Two. So many commodities were in short supply at that time. My grandmother, who was a widow, made my mother’s wedding dress and veil. Although not shown in this picture, there is one other thing I know she made to celebrate my parents’ marriage—her traditional groom’s cake using her fruitcake recipe.

What sounds more Christmasy than figgy pudding? There is even a song about it. I chose that as a historic food for my Old Timey Holiday Kitchen book, Figgy Pudding by Francine.

Because I have always liked fruitcake—particularly my grandmother’s fruitcake—I became excited about the prospect of researching and making figgy pudding which, I discovered, has many of the same ingredients as fruitcake—particularly my grandmother’s fruitcake. What discouraged me was the instructions to steam the pudding for 4-5 hours in an oven. That was fine for the days when people cooked and baked using a fireplace for woodburning stove—often what they also used to heat their homes. However, with today’s utility rates, I knew I should consider steaming a pudding with either a crockpot or my Instant Pot.

I accepted the challenge to create a recipe suitable for my Instant Pot. Using recipes from my Instant Pot cookbook as a guide, I came up with my own version for figgy pudding which I included in the back of my book. I will not share the recipe right now. It’s in the book. What I will share are some of the steps for making it work using an Instant Pot. 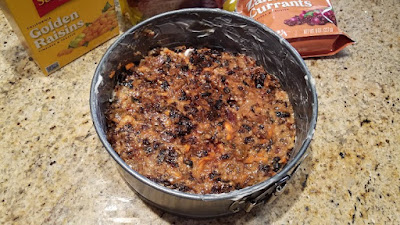 After assembling the ingredients, thoroughly butter a 7-inch springform pan or other pan about the same size that will fit inside of an Instant Pot. Fill with pudding batter. 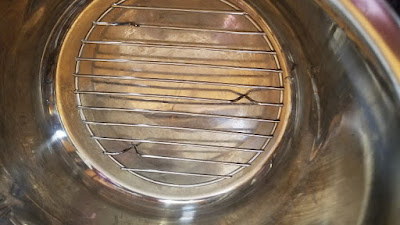 Place a rack that will elevate your pudding about 1/2 inch above the bottom of your Instant Pot liner. Fill with the bottom with 1 to 1-1/2 cups of water (about level with your rack).

Tightly cover the pan with the pudding mix using heavy aluminum foil. Using kitchen string, securely tie the foil covering to the pan. (Do not skip this step. Traditional recipes as well as the cake recipes in the Instant Pot cookbook call for the top foil to be secured to the pan with string. I don't keep string in my kitchen, so I used sewing thread and wrapped it around the foil 4-5 times before tying into a tight knot.)

Next, using a sling, place the springform pan inside the Instant Pot liner. If you do not have a commercial sling, use a long piece of heavy foil doubled over twice lengthwise. Place the pan in the center of the sling and lower it into the liner. If using foil like I did, fold the edges over so they will fit inside the pot without interfering with the pressure-cooking seal on the lid. 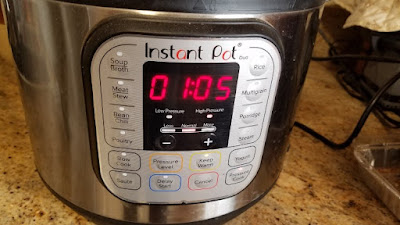 Set the Instant Pot to pressure cook on high for 65 minutes, which comes out as 1:05 on the digital dial. After cooking, allow the steam to naturally release for ten minutes. Quick-release the remaining steam and remove the lid. 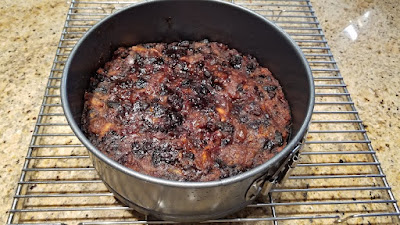 Using the sling and hot pads or mittens to protect your hands, lift the springform pan with your pudding out of the pot and place it on a cooling rack. Remove foil from the top and allow to cool 10-20 minutes. 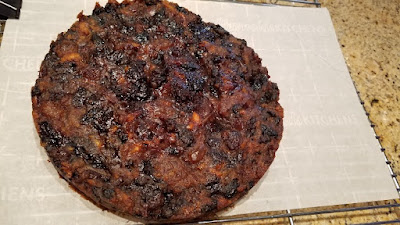 Release springform side and remove pudding from the pan, allow it to continue to cool. It may be served warm or cooled completely before wrapping to store for later.

So, there you have it—the equipment and process for steaming your figgy pudding using an Instant Pot. What does it taste like after it has aged for thirty days or more? I wouldn't know. I cut the pudding in half and tried to save half of it for later. It was too addicting. I ate a small slice every day until, within three weeks, it was gone. 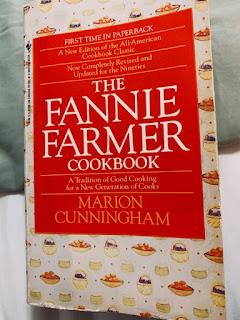 If you prefer a more traditional recipe, in the book, I also share in my novel one from 1837, and one from the Fanny Farmer Cookbook, which was shared with me by a supportive reader. Thank you, Renate Pennington.

As for the history of figgy pudding, I’ll let my heroine, Francine Mulder, explain it to you, just as she did the students at the girls’ academy where she worked. Here is an excerpt from Figgy Pudding by Francine:

“All right. Although we are making the figgy pudding that is my mother’s traditional Christmas dessert, its form has actually changed several times over the centuries. Who can tell me why? I’ll give you a clue. Puddings, like the one we’ll be making, were developed by people who lived in the British Isles. Because it is in the northern part of Europe, the climate is much cooler than continental Europe.”

“I thought this was cooking, not ancient history,” Sadie groaned.

“So many factors influence our lives, including the kinds of food different people eat.” In spite of her back teeth being clamped together tightly, Francine forced a smile as her gaze met Sadie’s.

“A lot of plants didn’t grow as well there, did they?” Yvette, her forehead creased, leaned on the table. “I mean, my grandmére is from France. She says they can grow many more kinds of crops there than in England. She claims England will never grow grapes as well as France.”

“That’s true. England gets a lot of rain, which makes it a green country with a lot of pastureland and woodland. However, it is not as warm as some other countries. It is harder to grow some of the crops found farther south. Much of their diet is animal-based. They might grow some grapes, but probably not as many varieties as France and other nations. The English do use raisins in their dessert puddings, though. 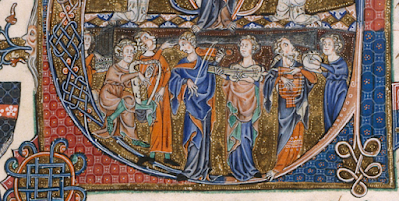 “They also had a lot of trees for firewood. In Medieval times, especially in winter, the people in Britain ate a lot of pottage―one pot meals with meat, grains, and vegetables seasoned with herbs and cooked over a slow fire―or puddings. Since animals ate a lot of grain during the winter, many were butchered and eaten during the winter holidays. However, to keep the meat from spoiling, they were often cooked into puddings with seasonings, grains, animal fat, and dried fruits. This was in an era when honey and sugars were very expensive. Fruits and spices were used to preserve meat.”

Lila raised her hand. “Miss Mulder, that sounds like what the Plains Indians in the West do. They stuff a mixture of buffalo meat, fat, and berries inside intestines to make pemmican. I’ve seen stores in Denver that sell it, although I’ve never tried it myself.”

Francine nodded. “Correct. Many people have discovered that using a lot of fat mixed with certain fruits will preserve meat and help it not spoil for weeks or months. It’s because of the natural sugar and acid in fruit. Also, the fat helps seal out the air and things that spoil meat. It was important for the people who lived in the British Isles to learn how to preserve food to help them get through the long, cold winters. These puddings were very dense. Eating even a small amount for a meal kept people from starving before the next growing season. Now we have sugar that is more affordable. We can make our puddings more of a dessert instead of survival food.”

“What other fruits grow in England?” Evelyn hunched her shoulders and raised her palms. “This is called figgy pudding, but I thought figs grew in the Mediterranean. Christ cursed a fig tree, so they must have been grown in Palestine.”

“True. However, I’m sure there were some dried fruits like figs that were brought into the British Isles. Even though expensive, there might have been occasions they were included in holiday puddings. I think figgy pudding has become a generic name for any type of dessert pudding. I do know most recipes call for dried plums, which is why some people call it plum pudding. Others call it Christmas pudding. These puddings also included cherries, raisins, currants, and other berries.”

Figgy Pudding by Francine is Book 9 in the Old Timey Holiday Kitchen series. The book description and purchase link is available by CLICKING HERE.

Mail Order Letitia is my other Christmas book this year. It is in the An Impostor for Christmas series, Book 9. The print version is now available. The ebook version releases December 14, 2021. To find the book description and link, please CLICK HERE.