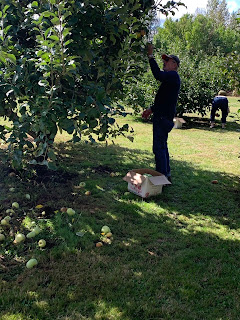 The third Saturday of the month of September is an exciting time around the famous Philip Foster Farm in Eagle Creek, Oregon. I've written about this delightful place and its history before, but I've never written about the annual Cider Squeeze.

People come from all over for this, many who bring their own apples for the one-day event. And it wasn't just about making cider. There were musicians, food booths and a wonderful pie stand where you could buy pie by the slice or get one whole. Children were running around in period costume and demonstrating dances the pioneers and folks in the old west were taught. It was a grand time for all and there was a great turn out.

There's just something special about fall and the farm knows how to welcome it every year with this much looked forward to event. In fact, cider is experiencing quite the comeback. If you're not familiar with cider's history, here are a few fun facts. 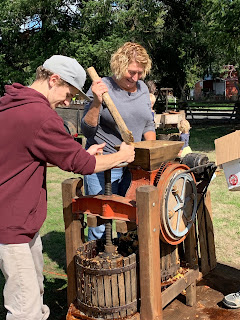 Kingdome and discovered the locals drinking hard cider. Back then they had to pound the fruit and press it using hand tools to make their cider. Over the years methods of cider making become more advanced. Then along came the horse mill, a huge horse-powered verticle millstone that was rotated around a trench full of apples. The fruit was smashed and pressed then the juice collected.

Following this method came the screw press, one of the methods used during the Foster farm's cider squeeze.  This should be familiar to anyone with a home cider pressing set up. First you ground the apples, then place them into a filtering system/mechanism. Then they are pressed by a weight attached to a large screw-type mechanism at the top.

It was a lot of fun to watch this process (even more fun to taste the results) and different apples produced slightly different versions of cider. One woman went back to her car several times with a wheelbarrow and each time returned to the pressing area with a wheelbarrow full of apples. There were containers and boxes of apples everywhere. Folks had fun watching others make their cider while waiting for a press to free up. I thought the cider squeeze would consist of demonstrations of how the presses worked. I had no idea people would come from all over with their apples to press themselves. It was a fun-filled day for all and the best part? Everyone got to take their cider home with them. For those that just wanted to 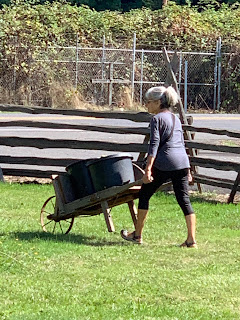 make cider but not take gallons home, the yummy apple cider was taken to the cider stand and sold by the cup to support the farm.

Philip Foster Farm is a wonderful place with lots of living history events throughout the year. Summer kid camps, house and farm tours, a wonderful general store and all sorts of other things that help people learn about what it was like to travel west on the Oregon Trail.

For more information, you can contact the farm here.

That's it for this month, folks! Until next time,