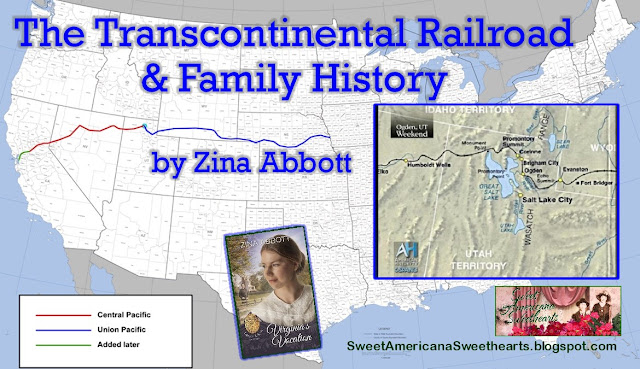 Today I am telling the story I have about my great-grandfather, Edwin Brown, regarding his time working on the Transcontinental Railroad.

To set the stage a little, Brigham Young, the leader of the Church of Jesus Christ of Latter-day Saints, had been advocating for a railroad to cross the nation from the time he first started to lead the members of the church to the Great Salt Lake Valley and points beyond. For more details, read the section about him in last month’s post by CLICKING HERE.

When the Union Pacific finally reached Utah, the company began looking for more railroad workers. They still had the daunting task of cutting a rail bed through Echo and Weber Canyons. This would require grading and laying track on steep terrain and blasting three tunnels through the surrounding mountains.
The region had just gone through another round of having many of their crops destroyed by a grasshopper plague. Both money and work were scarce. Many Utah men welcomed the opportunity to work and earn wages to support their families.

In spite of its large Chinese workforce, the Central Pacific Railroad also needed more men as they crossed northern Nevada and approached the Promontory Mountains. Once they learned that Brigham Young was negotiating with the Union Pacific Railroad, they also sought “Mormon” laborers. (More details will be in a future post.)

I do not know which railroad hired my great-grandfather. Sometimes I get frustrated with my ancestors because the family histories they left behind are a little skimpy on details regarding this period in Edwin’s life. My grandmother, especially, as she became one of the few descendents of those who lived with and knew people who crossed the plains in covered wagons, did not share these details when she offered historical information to various publications. All I know is, Edwin Brown was married to my great-grandmother by 1868 when the two railroad companies were hiring. They had two small daughters. He lived in a house on a lot that was part of the farm his older brother, Henry, inherited. Since Henry needed to stay on the farm to support his widowed mother, underage siblings, as well as his own wife and children, Edwin left to work for the railroad. 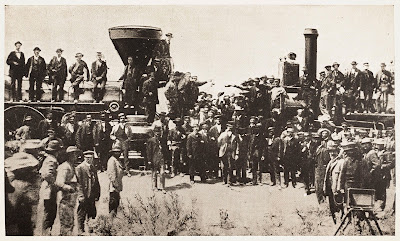 While most of the men from Utah started for home on May 8, 1869 when the two rail lines were complete and ready to be joined—they had crops to plant and families to see to—Edwin was among those rail workers who stayed to witness the Golden Spike ceremony.

What Grandmother Goldie left me was a folksy, human interest story that does not tell much about the railroad work her father did. However, it does shine a bit of light on the physical and social conditions under which these men worked. Here it is:

“When he left, he had beautiful black curly hair.  And his little old grandmother lived with him.  And she made him promise that he would bring those beautiful black curls home to her….And, so, when the men got to working on the railroad, they all neglected themselves and got head lice and body lice and anything else.

“But my dad didn’t.  Every time, as they went along working and they came to a ditch or a creek, my dad went out and took a bath and washed his head.  He didn’t have body lice and head lice.  And he wouldn’t allow anyone who did to stay in his tent.  And, the other men were jealous and kept after him.  They shaved their heads….But, my dad, he had his pretty long black hair…curled...he was going to bring them back to his grandmother.

“So, he never took his gun off.  And when he went to bed, he put his gun right down by his knee.  And, the men kept whispering around and whispering around.  He knew there was something up.  All the other men made up between them that they would catch him in bed when he was asleep…and hold him down and cut his hair.  And sure enough, they come one night and thought he was asleep in bed.  He just got his gun (click) and told ‘em – 'You take one step forward and I’ll let you have it.'

“And he brought his pretty black curls home.”

According to Melvin Miner and June Kasteler, cousins who wrote some of the family histories available, it was his mother, not his grandmother, to whom Edwin returned with his curly hair.   However, Edwin’s paternal grandparents, Jonathan Brown and Frances Mary Green Brown, emigrated from England and both of them died in Salt Lake.  Frances Brown was still living at the time that Edwin worked for the railroad. So, I think my grandmother had it right.
All the family histories agree that Edwin was present at the Golden Spike ceremony.  He told his family that if they look in the pictures that were taken of the event, he is in there somewhere. Every time I come across a photograph of that event, I scan the faces looking for a man in the back of the crowd who could be my great-grandfather.

Author’s Note: May 10, 1869 is the sesquicentennial of the Golden Spike ceremony joining the Central Pacific Railroad and the Union Pacific Railroad to create the Transcontinental Railroad. For the next few months, across all the blogs for which I write, I will share pieces of this railroad’s history. It has special meaning for me since one of my ancestors worked on this railroad once it reached Utah. All of these blog posts will eventually be gathered on a page in my own Trails and Rails blog.

My most recent book, Virginia’s Vocation, is now available on Amazon. In 1859, when Virginia, escorted by her older brother, Jefferson, travel from Missouri to Ohio, the train that had almost reached St. Joseph, Missouri was the most westerly point served by a railroad east of the Missouri River. This was a mere decade before the east and west were joined by the Transcontinental Railroad. To read the book description and access the purchase link, please CLICK HERE.