The Early American Handyman or Handywoman by Kimberly Grist 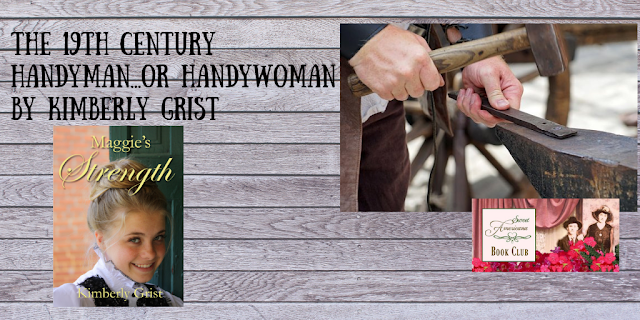 According to the book, A Museum of Early American Tools by
Eric Sloane, a Blacksmith, was the Early American handyman. The word ”Smith” derived from ‘smite; ‘black’ from ‘black metal
(A silversmith would be considered brightwork). 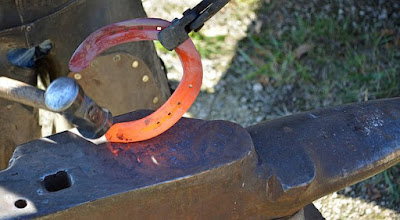 In the middle 1800’s he began taking over the farrier’s job of horseshoeing and made nails, hinges, cooking utensils and every kind of tool. Using little more than fire, water, a hammer, and anvil the resourceful village blacksmith provided a vital service converting raw iron into anything imaginable. 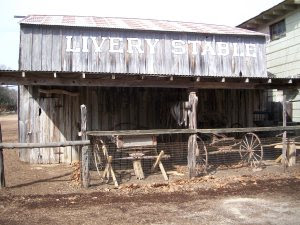 Almost everything the pioneers used from the kitchen skillet to farming tools were made from at least partially from iron and, made from hand. 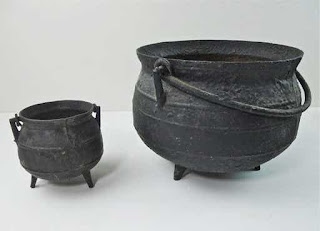 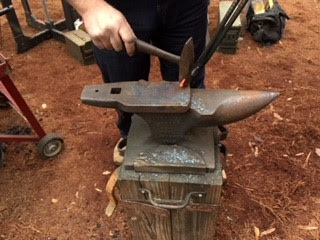 Link by link, chains had to be hammered into shape in the fiery forge. The blacksmith would hammer the parts into shape with one hand while holding the iron in the other. As a result, their right arm was more massive than the other.


Although most blacksmiths were males, in my new release Maggie’s Strength, our heroine learns the trade from her father whose character was born out of my fondness for a poem by Henry Wadsworth Longfellow. 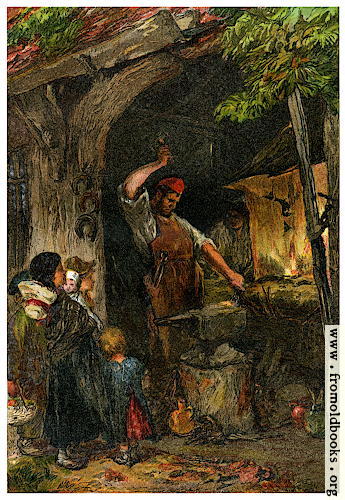 The Village Blacksmith was first published in 1840 and describes the daily life of a local tradesman who balances his family life work and family beautifully. Just like the spreading chestnut tree, the smithy’s physical strength is secondary to his character.

Under a spreading chestnut tree
The village smithy stands;
The smith, a mighty man is he,
With large and sinewy hands;
And the muscles of his brawny arms
Are strong as iron bands.

His hair is crisp, and black, and long.
His face is like the tan;
His brow is wet with honest sweat,
He earns whate'er he can,
And looks the whole world in the face,
For he owes not any man

Week in, week out, from morn till night,
You can hear his bellows blow;
You can hear him swing his heavy sledge,
With measured beat and slow,
Like a sexton ringing the village bell,
When the evening sun is low

And children coming home from school
Look in at the open door;
They love to see the flaming forge,
And near the bellows roar,
And catch the burning sparks that fly
Like chaff from a threshing floor.

He goes on Sunday to the church,
And sits among his boys;
He hears the parson pray and preach,
He hears his daughter's voice,
Singing in the village choir,
And it makes his heart rejoice.

It sounds like to him like her mother's voice,
Singing in Paradise!
He needs must think of her once more,
How in the grave she lies;
And with his haul, rough hand he wipes
A tear out of his eyes.

Although most blacksmiths were men, in my new release, Maggie's Strength, I introduce a pint-sized young woman who enjoys working alongside her father and brothers in the forge.

Maggie enjoys adding a bit of whimsy to the practical and useful pieces. 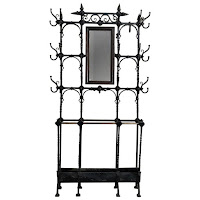 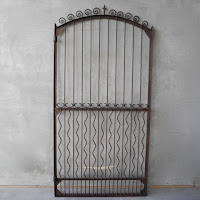 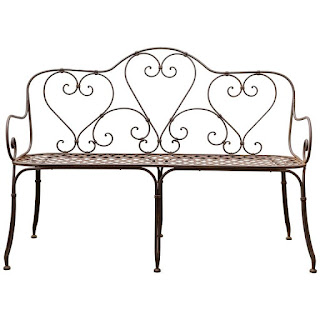 Leaving the heavy ironwork to her father, she sketches the designs and pounds out the more intricate pieces, adding swirls and heart shapes.

Although a work of fiction, I was inspired by this hand-forged heart shaped bench, trivet and hall tree created in the 19th century. 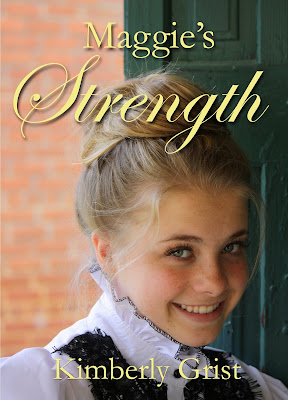 Twenty-year-old Maggie Montgomery is a petite young woman ahead of her time. She's had a wonderful childhood and enjoyed spending time with her father and five brothers and is happiest working in the smithy with them. A competent cook and housekeeper, as a favor to the local doctor, she moves in to assist his wife who is struggling to recuperate from a bout of pneumonia.

A tomboy at heart she ignores her mother's plea to dress more appropriately. Until the son returns. A recent graduate of medical school, although handsome, the young doctor is stoic and obviously put out that his father has hired her to help his mother recuperate. Sparks fly and suddenly for the first time, Maggie is concerned more about how she is perceived by others, especially the young doctor. The question is, why?

Can they get past their first impressions?

Fortunately, she draws on unrelenting strength where iron sharpens iron-forging an unexpected result of the romantic kind.
https://www.amazon.com/dp/B07SM9HKWP

Posted by Kimberly Grist at 9:24 AM