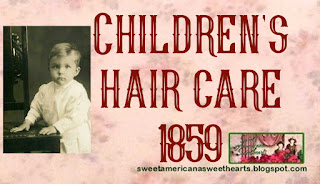 It might not be a surprise that advice from the Victorian Era might not be all too scientific. While some of their advice can be common sense and good as far as their anecdotal content... when I discover a lot of great 'hints' in magazines of the period, I might also find a few that seem... 'borderline' in their quality.
So, that is my LONG WAY of saying.. take what you see here as just a window into the world of the Victorian Woman...
I do NOT recommend any of the information here as something you could apply to your own lives... in fact some of this sounds quite painful.. just read this for the historical merit.

The whole article is titled - The Hair: How to Promote, Preserve, & Keep Luxuriant

The development of hair in infancy is the most capricious: we frequently see children who are born with a plentiful supply of that most important covering, and quite as frequently without it- or, at least, the hair, or down, is of such fine quality as to be scarcely perceptible during the first few weeks or months of their infantile existence. It is considered that the tardy appearance of hair is a certain indication of debility or weakness in children, to remedy which, gentle friction and washing the head in cold water are recommended, and dry-rubbing it with a coarse towel, though it is not to be followed as an infallible remedy.

Many children like the feline race, dread cold water; in which case the application of it is not to be preserved with. When the child has attained the age of eighteen months, the hair will be found to have increased in quantity, being thicker in some places than in others. This is the time to lay a good foundation for the future growth of the hair. There are many who cut their children's hair themselves, without regard to method or uniformity, and thought that first it appears strange to assert that none but those practiced in their business should perform this operation, yet second thoughts must convince the skeptical of this necessity. Those not acquainted with the rules of "hair cutting" would, to a certainty, "notch" the hair, a consequence highly prejudicial to a neat appearance about the head.

Nothing give a greater character of cleanliness in a child than a well-cut and dressed head of hair, it is the silent language that delights the eye, whether in admiring the innocence of childhood, or contemplating the attributes of beauty in those of mature years.

The hair should be kept short for the first five or six years in life, by observing a system of clipping the points once in a month, at least, and it may be followed as a general rule, "that the slower the growth of the hair, the more frequently it should be cut." it has been observed, that where the hair has been allowed to grow in children to any length, it not only becomes weak, but deficient in thickness on the temples and sides of the head. The best treatment here is to gradually shorten the hair already in advance, and shave the parts where little or none has grown, with persevering use, or well rubbing in a pomade made in the following manner; Prepared lard, 2 oz; Benzoic acid, 5 gr.; to be well mixed together, and perfumed, though it is not advisable that pomade containing strong scents should be used, as they often cause irritable eruptions upon delicate skin, in infants.

What do you think? Some of these theories strike me as Whoa-no!