What Did the Children Do?

Pioneer children were expected to help their parents. Their workload was easier, of course, but they still had a full slate of chores that had to be done. Boys would help in the fields when they got a little older and stronger. In the meantime, they'd help weed the garden, take care of the cows, feed the chickens, and bring in fire wood. Girls also worked in the fields when they got older when they weren't needed in the house. Some of the common house chores for girls were laying and stoking the fire, boiling water, helping with the laundry, and milking the cows. 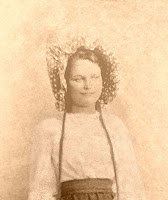 Girls working in the fields was a far cry from the experiences of girls back east. Pioneer girls had more freedom than the girls in the east. They were exposed to more and learned a wider scope of skills than girls who were meant only to marry and raise a family. 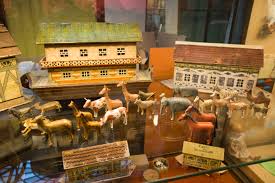 While the children did a fair amount of work, they also had time to play and enjoy being kids. Most of the time, they had to use their imagination to come up with games to play. Toys weren't plentiful unless they were home-made. In the late 1800s manufactured toys did make their way west. One of the most popular toys was a Noah's Ark set. I think I had one, too! My neighbor's little boy has one. This is one toy that has stood the test of time.


Imagination truly was the best way for a child to have fun in the west. Building forts, playing chase, riding on each other's backs. All these were ways children had fun together. There was so much adventure in the life of a child on the western frontier. With so much to explore, they could stay occupied and happy for hours and hours if they had the time away from their chores.

Kids today play video games instead of getting outside and enjoying the great outdoors. Times have certainly changed. Instead of an electronic game of Frogger, kids in the 1800s would probably hunt for real live frogs. I remember doing just that when I was a child. How exciting it was when we found a big fat one! Admittedly, I'd not even consider touching one today, but as a child finding a big frog made for a near perfect day.


In my book, The Sheriff and the Nanny, Sheriff Shelton's kids pull a joke on their new nanny. It's a wonder she decided to stay. But the girl was just as persistent as the children. Here's an excerpt I hope you'll enjoy.

“Miss Kent!” Bobby’s childish voice rang out as he started toward her, “I found you a present.” Before he could even get the words out of his mouth, Cissie ran up behind him and gave him a push that sent the toad shooting out of his hands and right into Cynthia’s lap.

Regardless of how prepared she was, Cynthia had not expected that the toad would make a surprise flight to her lap. As she squealed in surprise, Cynthia could hear the children laughing at her fear.
Swallowing hard, Cynthia forced herself to reach into her lap and grab the nasty creature. Standing up straight, she smiled when she looked down at the children’s shocked faces. They seemed more surprised to see her holding the slimy thing than she had been when it jumped into her lap.

“Bobby,” Cynthia scolded lightly, “You need to be more careful. You hold them firmly around the middle. Like this. Oh dear.” The toad managed to wriggle free of her grasp and took off hopping across the ground.

Deciding that this was her opportunity to bond with the little boy, Cynthia pointed toward the escape animal and said, “Hurry, get it!”

Giggling uproariously, Bobby followed her instructions, trying to grab the toad before it could get away.

Looking down, the happy moment was cut short when Cynthia noticed Cissie’s disgusted scowl.
“You’re supposed to be a lady,” Cissie announced, her voice sounding scornful, “You shouldn’t be touching that toad. I’m telling Papa. Once he hears that, he probably won’t want you to keep us anymore. He doesn’t want women like that around us. He wants a grown up to stay with us. Not a big girl who still plays with toads."

Cynthia felt her heart drop. While she knew that the little girl was trying to upset her, she worried that there might be some truth to the child’s words. Cissie certainly knew how to make her feel insignificant and bad about herself. She tried to shake off the unkind words of the child, but the sting lingered. She knew the girl was using harsh words as a shield and she knew she’d have to find a way to break through her hard shell.

Rubbing her hands together, Cynthia watched as the little girl took off after her brother, swinging her arms at her sides like a soldier.

That little girl was certain to be a challenge.

Find The Sheriff and the Nanny on Amazon

Follow Annie on Amazon, Bookbub and get email updates.
Posted by Annie Boone at 12:30 AM