I’ve written a few books about life on a wagon train and I find the research interesting. I have great admiration for those brave pioneers who left their comfortable home to walk across the country under the most primitive conditions. Some had no idea where they would end up or what to expect at the end of their journey.

In search of inexpensive land and opportunity, American pioneers migrated westward by the thousands. The early British American colonies for the most part hugged the Atlantic Ocean. As the population of the colonies grew and expanded, westward migration began and never really stopped.
The migration of pioneers had pushed the American frontier to the Mississippi Valley by the 1830s. Traders, explorers and missionaries who traveled further west described of fertile valleys, great forests and abundant farming, mining and hunting opportunities in the Oregon, California, Missouri frontiers and other western regions west of the Mississippi River.
From the 1840s to the 1860s more than 300,000 pioneers crossed the plains and mountains of the West along various routes such as the Oregon and Santa Fe trails.
How Did They Travel?

Oxen were slower, but more reliable and tougher than mules. They ate poor grass. Oxen were very strong and could haul fully-loaded wagons up ravines or drag them out of mudholes. A large wagon needed at least three pairs of oxen to pull it. 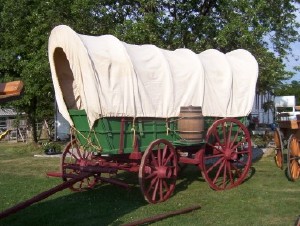 What Trails Did They Use?

Wagon Trains were composed of up to 200 wagons, though more common were trains of 30 or less wagons. It was decided early on that the larger the caravan of wagons, the safer the travelers would be. 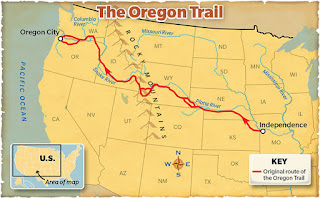 What Did the Pioneers Need For the Trip?

A wagon and oxen team cost each family about $400 to $600. The total weight of wagon's cargo pulled by the oxen was about 2500 pounds. That was a lot of money back then. 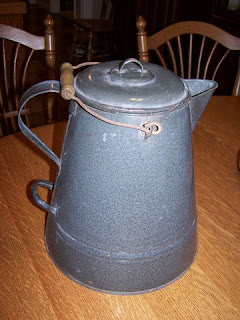 What Were the Biggest Hazards?

Contrary to popular belief, attacks by Native American Indians were rare. Often, the local Indian tribes welcomed the Wagon Trains to trade. Although the long westward journey caused numerous deaths and injuries through accidents, weather and terrain related causes; the biggest danger was disease.  Thousands of pioneers died along the way due to disease and lack of medical attention.
Illnesses claimed far more lives than violence, and the majority of violent deaths on the trail were entirely accidental.
·           Disease. Illnesses such as food poisoning, typhoid and, particularly, cholera were the primary causes of death for travelers on the Oregon Trail. ...
·           Wagon Accidents. ...
·           Drowning. ...
·           Gunshots. 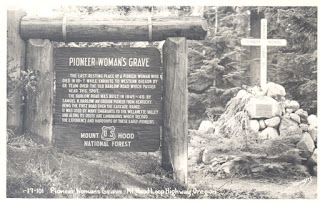 A Typical Day on the Trail

4:00 am: a bugler blows a trumpet or a rifle is fired by the night guards to wake up the camp.
5:00 am: cattle are rounded up after being allowed to graze during the night (except when Indians threatened).
5:30 am: women and children are up and fixing breakfast of usually bacon, corn porridge or “Johnny Cakes” made of flour and water.
6:30 am: women rinse plates and mugs and stow bedding, while the men haul down tents and load them in the wagons.
7:00 am: after every family has gathered their teams and hitched them to wagons, a trumpeter signals a “Wagons Ho,” to start the wagons down the trail. Average distance covered in a day was usually fifteen miles, but on a good day twenty could be traveled.
7:30 am: men ride ahead on horses with shovels to clear out a path, if needed.
“Nooning Time”: animals and people stop to eat, drink and rest.
1:00 pm: back on the trail.
5:00 pm: when a good campsite with ample water and grass is found, pioneers stop to set up camp for the evening. Wagons are formed into a corral.
6:00 pm: families unpack and make supper.
7:00 pm: mothers do chores, men smoke and talk, young people dance.
8:00 pm: camp settles down for the night, guards go out on duty.
Midnight: night guards are changed.

My Newest Release is A Bride for Nathan, book 3 of the series: Proxy Brides.
Barb's Website 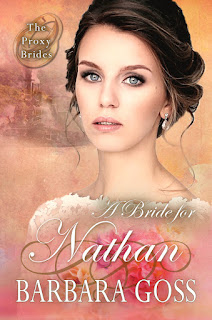