A Christmas Release and an Excerpt!

I love autumn with a capital A! So I truly prefer to think about Christmas AFTER Thanksgiving. That said... my publishers at Harlequin have released my Christmas book, and so I do want you to be aware of it among all the hubbub as we approach the holidays! 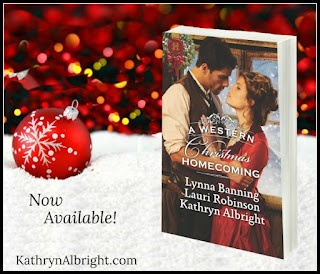 A Western Christmas Homecoming contains three novellas that take place during the Christmas Season.  Christmas With the Outlaw, my story in the anthology, is the last book in the Oak Grove Series that I have been writing with Lauri Robinson. Oh my, how hard it is to say goodbye to the inhabitants of our dear fictional town, but I believe after seven books, it is time. Here's a blurb of the characters and plot...

Abigail White reports the news for the Oak Grove Gazette -- clearly, concisely, and ...rather critically, until the day outlaw Russ Carter stumbles through her back door, injured and seeking a place to hide.

Russ never expected to see Abigail again. She's all grown up now -- sharp, smart, and fascinating. Compassion is not her strength, but in this season of giving, a few elves are hard at work, and Abigail's own heart might just be the cost.

Christmas with the Outlaw


Russ drained the cup on his next sip. It wasn’t very big—a woman’s dainty, painted teacup. He was glad that she held it. In his hand, it might shatter. Well…maybe not so much now considering how weak he felt. He lay back against the pillow as a wave of gratitude washed over him that she’d been here…that Teddy had been here. “So… I made it to Oak Grove.”

“You wouldn’t have made it an inch farther. What in the world happened, Russ?”

He was still trying to sort that part out. “A lot. I…uh…appreciate you taking me in.” She hadn’t wanted to. He remembered hearing that much during a lucid moment.

Startled, she met his gaze. “Russ… Of course, you are welcome. We’ve had our differences, but I would never want you…”

“Dead?” He gave a half laugh to cover his frustration. His life had suddenly come undone. To hell with the teacup, his life was what was shattered, and he’d played a part in letting it happen. “We didn’t get on all that well, you and me. Guess you’re entitled to your own opinion.”

They were harsh words, but honest.

She avoided his gaze. Where was her patent keen retort? Her silence now could only mean one of two things. Either he’d been so near expiring that he really had frightened her or, which was more likely, her opinion of him was still mired in the mud. Unspoken, but heavy in the room, was their last parting.

She set the teacup aside. “How is Tim?”

So it was still Tim. He blew out a breath, a sense of unease weighting his gut. “He’s married now. Loves ranching. He and his wife are expecting their first baby.”

She pulled back, her composure stiff. “Then he’s content living in Colorado.”

She pressed her lips together. “That really isn’t any of your business. Then or now.”

Why was she still angry with him after all this time? Didn’t she realize that she had deserved someone who was more her match? Someone stronger, with more grit than Timothy. Someone a heck more like himself. “If he had really wanted to stay, he would have.”

“You’re implying I should be grateful that you whisked him away?”

“Yeah. Maybe you should.” Tim was too easily swayed. She would have been bored after a month of marriage. Russ figured he’d saved her from a pile of grief and he wasn’t one bit sorry about it. “It proved his mettle.”

A moment passed as she mulled over his words. “Teddy once said the same thing.”

She met his gaze. “No one calls me Abby here. When we moved here, I asked Teddy to introduce me as Abigail. It’s more professional.”

Amusement flashed in her eyes. “You would.” Then her entire demeanor softened as she lowered her shoulders. “I suppose I like it too. And Russ…I’m glad you felt you could come to Teddy…come to us for help. Friends are…so very important.”

As long as they don’t shoot you, he thought bitterly. How long had it been since then? “What day is it?”

“Early Wednesday. Morning has just broken. I found you yesterday in our storage room.”

Four days then. McCabe was shot on Saturday. Word would be out about him.

She studied him, her dark brows knitting together. “The important thing now is that you are better. You are going to be all right.” She stood. “I’ll see to some breakfast for us.”

He wasn’t used to having anyone worry over him—not since his own mother. Yet he couldn’t deny that it felt good to be among friends he could trust, friends who cared. “Sounds good. I’m starving.”

A wry smile formed on her lips, revealing dimples on each cheek.

He remembered those dimples. At thirteen, they’d been inconsistent with the rest of her sharp-edged personality and she hadn't showed them much anyway. Now? Hmm…

“Starving it is? Then you must be feeling better. Perhaps you won’t even mind my cooking.”

How difficult could it be to whip together toast and eggs? “You’ve got to be teasing.” And then it struck him. Abby? Teasing?

Her cheeks flamed pink. “No. Actually, I’m telling the truth.” She scooted from the room.

Here is the back cover blurb about the other two stories
and a necessary caution since this is a blog site that caters to stories that are G-rated...  Since I haven't read these two stories I am unaware of their "sweet & clean" status, however Christmas with the Outlaw is rated G!

In Christmas Day Wedding Bells by Lynna Banning, buttoned-up librarian Alice is swept away by US marshal Rand Logan on a new adventure. Then, Welles is Snowbound in Big Springs in this novella by Lauri Robinson, where he must confront Sophie and their undeclared feelings… Finally, rugged outlaw Russ rescues Abigail from spending the festive season alone in Christmas with the Outlaw by Kathryn Albright! 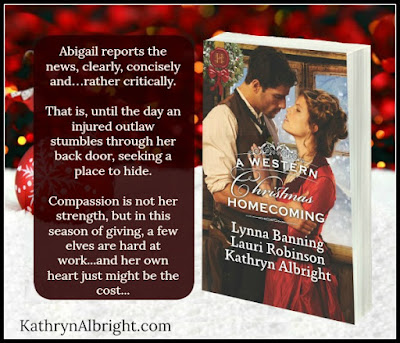