A community located fourteen miles north of present-day Downtown Dallas is known as Farmers Branch, Texas, but that wasn’t always so. The area was first settled in 1842 by three families—Thomas Keenan and his wife Sarah, Isaac B. Webb, and William Cochran--who received the original land grants. Remember, single men were awarded a headright of three hundred forty acres, and married men received six hundred forty.

Originally, the settlement included all the land between the Dallas County Line on the north, Cedar Springs to the south, on the east, White Rock Creek, and the Elm Fork of the Trinity River on the west.

In my new Christian historical Cross Timbers Family Saga series, book one GONE TO TEXAS, the four main families came from Tennessee and settled in what’s today the Irving area.

Just after these families arrive and stake the boundaries of their property (around seven thousand acres) in 1840, they met a new neighbor loosely fashioned after history’s Thomas Keen—Thomas Baldwin, a single man whose two sisters, their husbands and children arrived and staked their acreage off just north and east of our original characters in TEXAS MY TEXAS 1841—later Farmers Branch.

By 1842 the area was first called Mustang for the wild grapes that grew along Mustang Creek, so named for the wild horses present in the area. It was a part of Peters’ Colony—the name of four empresario land grant contracts issued by the Republic of Texas’ president Sam Houston, and later the State of Texas, to several groups of both English and American investors all headed by William Smalling Peters.

On August 30, 1841, it was Peters’ son-in-law Samuel Browning who actually signed the first contract. The fourth contract added ten million acres of land to the west, including all or portions of twenty-six additional counties. A county in Texas typically encompasses an area of nine hundred square miles.

Because the soil was so rich, and the crops plated flourished so, William Cochran changed the settlement’s name to Farmers Branch, and the little community became the best-known of all the Texas settlements from 1845 to 1850 as the Texan Land and Emigration Company advertised in the east and Europe for pioneers for immigrants to come and settle there. 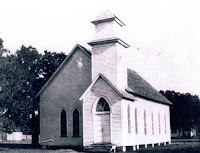 The first church in Dallas County was organized by Farmer’s Branch founder Isaac Webb, with its first meeting held in Webb’s log cabin in March 1844. On May 5th, 1845, missionary Reverend Shook preached to five members at the cabin.

Webb donated the land for the church building and an eighteen-foot square log building was erected in 1846 called Webb’s Chapel. It also served as the areas first school house. Some forty years later, a frame building was built to house the Methodist congregation that still existed into the 1990s.

A Baptist minister, William Bowles started the area’s first blacksmith—his slave Jordan was the smithy—and a gristmill in 1845. Farmers Branch got a post office in 1848 with Isaac Webb serving as post master. It functioned until 1866, was closed, then re-opened in 1875. The first local cotton gin was built in 1849 by James A. Smith.

In 1874, early settler Samuel Gilbert and others sold right-of-way through their property to ensure the railroad would come through their little town. A few years later, the Dallas and Wichita Railway finished a track from Dallas to Lewisville—with a stop in Farmers Branch (depot built in 1877)—that was later taken over by the Missouri-Kansas-Texas Railroad Company in 1881.

BIO: Caryl McAdoo prays her story brings God glory which is what she lives to do. Her award-winning, best-selling novels enjoy a lion’s share of 5-Star ratings from Christian readers around the world. With thirty-eight titles, it’s obvious she loves writing almost as much as singing the new songs the Lord gives her—listen to a few at YouTube. She and high school sweetheart Ron celebrated fifty years of marriage in June 2018; they share four children and eighteen grandsugars. The McAdoos live in the woods south of Clarksville, seat of Red River County in far Northeast Texas, waiting expectantly for God to open the next door.