Lies broke them. The truth will heal them ... if time doesn't run out.

When Fritz Brokken robbed the bank with his brothers, he did more than steal the meager resources of the town of Brokken. He also shattered Lydia Walsh's heart.

When Fritz returns to Brokken to recruit reinforcements to save his brothers’ lives, no one believes his outlandish story. The sheriff throws him in jail. And he's running out of time. Lydia is a distraction he does not need or want.

Or does he? The truth of her love may be exactly what he needs to complete his mission.

This is a stand-alone novella although it follows Brokken Arrow and Brokken Rising in sequence.

This is part of the Brokken Road Romances series. 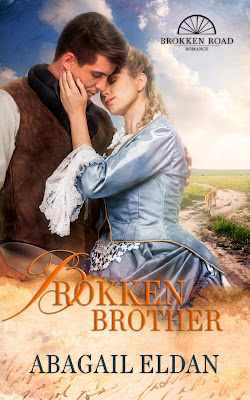 This is a sweet historical romance set in East Texas following
the Civil War.

Join me over on Abagail Eldan's Facebook author page to learn of new releases
or the Brokken Road Romances Facebook page.

Also, check out these other Brokken Road Romances:
The Prequel ...

And my other contribution to the series, Brokken Arrow.

Posted by Sheila Hollinghead at 5:00 AM