Working on a new series, I wanted to be as authentic as possible to bring the feel of the Old Western towns alive. Most times it winds up to be the characters that make a town authentic. While researching, I ran into some interesting facts and fodder that I'd like to share with you.

In my upcoming book, A Bride for Abel, the town's setting lies a few miles south of Alder Gulch, which most people know as Virginia City, Montana. I didn't want to use the actual town of Virginia City in my own story since building my own town is much more fun. So, I took bits and pieces from history to build a fictional place called Pistol Ridge.

One interesting story I read about is concerning a notorious dirty sheriff. Starting in 1863, and throughout the following years, there were many shady characters typical of a boom town. One particular lawman, Henry Plummer, was supposedly as crooked as the day is long. He was alleged to be the brains behind the road agents (a group of criminals who robbed stages, freight wagons and anyone using the road from Virginia City to Nevada City). Mostly, the road agents were men who were too lazy to mine for gold or find legitimate work. Instead, they found other ways to make their fortune.

In my own story, I had planned to use a sheriff who was not as honorable as the townsfolk thought. When I started doing my research, I was surprised and delighted to find the sheriff of Virginia City also had quite a reputation.
What do you think? Does he look innocent or guilty? 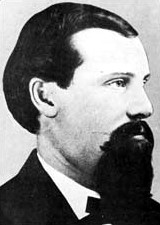 Since one of my first scenes start out in a saloon, I wanted it to be authentic. The interesting thing I found out and didn't know, was a dance hall girl and a soiled dove are two different people. While proper ladies look down their nose at a dance hall girl, she would never associate with a prostitute. So, what is the difference?

A dance hall girl doesn't have to become a prostitute. She is hired by the owner to offer dances to the patrons, charging .75 to $1.00 per dance. Afterwards, she steers the patron to the bar, where she talks him into buying them a drink, earning commission on the drinks, also. The irony is her drink is usually tea or colored sugar water since she isn't allowed to imbibe while working. The patron is paying the price for alcohol on both drinks. Does it sound like he is being duped? 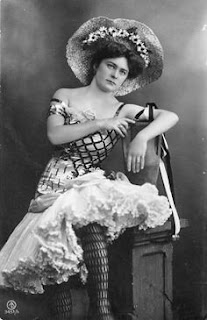 What about the rules of common courtesy and decency?

Interestingly, this can get quite complicated. If a man walks into a saloon and begs for a drink claiming he has no money, someone almost always will buy him a drink. On the other hand, if he orders a drink and then tells the barkeep he has no money, he may get himself beat up.

A man walks into a bar....truly, if he walks into a saloon in the 1800's, if there is a customer standing next to him, he had better buy that man a drink. Did you ever watch an old western and notice how they always seem to buy the man beside him a shot? It is actually considered common courtesy to do so. Now, if the man walks in and ignores the patron beside him, it is also considered bad manners. Men in the old west don't stand for disrespect.

On the other hand, if a customer is standing at the bar (no bar stools back then), and the patron next to him wants to buy a drink, he had better accept. Refusing can cause harm. It's been told a man or two have been marched through the streets to several different drinking establishments to teach a man some manners. Not sure what this entailed but I'm certain is wasn't pretty. 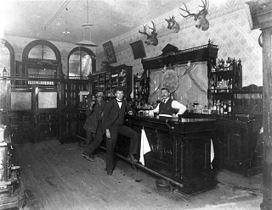 If you are interested in learning about Virginia City, MT, Laura Joanne Arata, a student at Washington State University wrote a thesis for her Masters of Art. It has tons of information (284 pages) if you like reading history. It can be found here: Thesis of Virginia City, MT

I hope you enjoyed my first post. If you'd love to be introduced to a new series, my book, A Bride for Abel, is set in a town much like Virginia City in 1875. It includes quite the adventure and a rotten sheriff as well. A Bride for Abel is due out November 1st, but you can always check out the other books in The Proxy Bride series awhile.  As of this writing, three of the books are already live.

Take a look at our exciting new series: 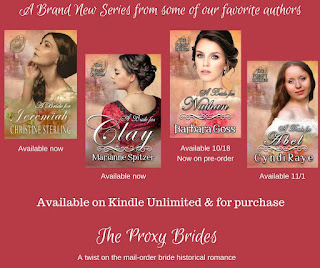 Book #1 A Bride for Jeremiah is live

Book #2 A Bride for Clay is live