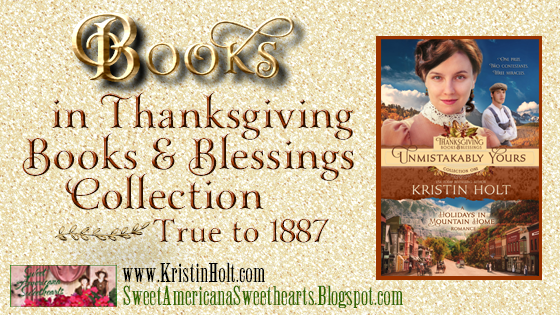 
I'm rather picky about historical accuracy. Let's just say that I've not always known as much about research or the way things really were (and my early titles show it). With every book I write, I fall more and more in love with the accuracy, and tiny elements that create a beautiful setting for a romance novel. Today, I want to share the "Books" part of the "Thanksgiving Books & Blessings Collection One" Series. Oh, and stick around! Make sure you stick with me 'til the end, so you can enter my PRIZE DRAWING for an ebook, standard paperback, or LARGE PRINT paperback of this NEW RELEASE.

All authors in this 9-author series were instructed to include books, any way we wanted, in our Thanksgiving romances. Given my circumstances and setting in Unmistakably Yours, I ended up electing to name true-to-history titles that the Ladies' Lending Library would have actually purchased (or received as gifts to the library), and have a era-appropriate book titles within other story elements (such as Jane's gift to the Murphy boys, and Hank's not-so-appealing nickname by the town's naysayers when they refer to our hero as "Chicken Little.") [Read the book description here-- after all, our hero is FAR from an anxious biddy. He's rather intelligent and wise.]


We all know "the sky is falling" and "Chicken Little"... but just how old is old? Hmmmm.... I was thrilled to find Mrs. M.E. Hall, widow of the late Salmon Hall advertising the sale of all kinds of books (even if she misspelled stationery as stationary) at her residence one door east of the Book Store formerly occupied by her late husband... as she's selling all of his remaining wares... In New Bern, North Carolina. In 1842.

Yay! Proof that "Chicken Little" was plenty familiar by my story, set in 1887.

But what are the chances that this "Chicken Little" is actually of The Sky is Falling vintage? Another historical newspaper clipping, published in The Times-Picayune of New Orleans, Louisiana on April 15, 1843, verifies the connection. See the transcription, below (I've taken care to maintain everything from paragraph breaks to punctuation-- quite different from today's). The original image is dark and difficult to read.

THE SKY FALLING.---The following humorous little nursery story, told by N. P. Willis, has a very ingenious and excellent point to it, showing, as a moral, how timid persons may be thrown into terror, and how there is always a "Fox Lox" ready to take advantage of their fright. Silly superstition and love of the marvellous [sic] will furnish capital to support humbug and imposture, until the end of time. Let the "Chicken Little" followers of Parson Miller look out for their "Fox Lox."

This example is common of the Victorian Era in the United States-- Newspaper stories retelling folk tales or fairy tales (all of which were not happy endings), intended to teach the morals of the day: honesty, obedience, integrity, wisdom, etc.

Here's a thumbnail image of the original clipping from 1843:

Naturally, my Ladies' Library Association would want to buy the most popular new titles. I was tickled to see that The Strange Case of Dr. Jeckyll and Mr. Hyde fit that bill. The following newspaper clipping was published in the Chicago Tribune of Chicago, Illinois on July 31, 1886... and my story opens in August of 1887. Notice the timing:


Note, above, "His (Mr. Robert Louis Stevenson's) "Strange Case of Dr. Jeckyll and Mr. Hyde" was published twenty-two weeks ago, and 22,000 copies have been sold--a thousand a week."

The following newspaper clip was published in The Clay Center Dispatch of Clay Center, Kansas on June 17, 1886, illustrating the likelihood that this title would be quite available (and of interest) in Mountain Home, Colorado, that very autumn.

Yipee! This well-known title was published in 1876, and though originally a commercial failure (according to wikipedia), newspapers of the decade show the title was certainly available for sale and people did buy it.

I'm pleased to offer to one winner his/her choice of the kindle edition, standard paperback, or large print edition of the paperback (paperbacks will be awarded to winners residing within the United States only; if the winner lives in another nation, I'll substitute the kindle edition).

TO ENTER THE DRAWING: 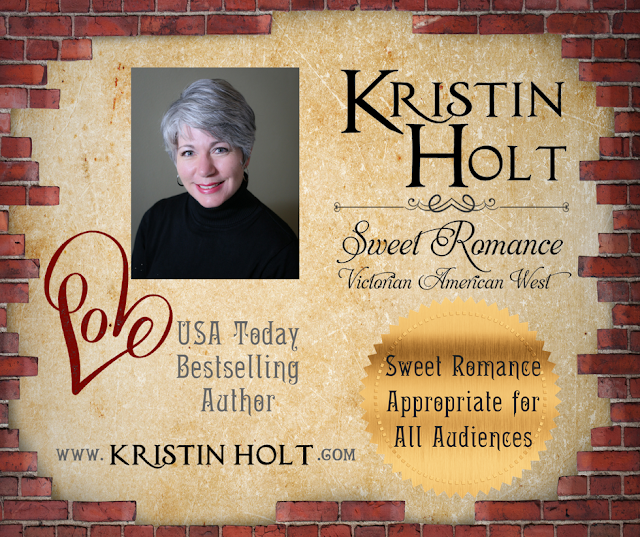