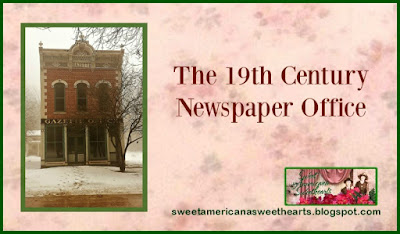 Composing sticks, tympans, and friskets…Oh My! What do these all have in common?

They are all parts that make up a newspaper office.
When I decided to write Abigail White’s story as the last addition to The Oak Grove Series, my research into the early newspaper office of the 1880's took me back to my local “living history village” where I was able to glean information on American small-town newspapers from our local historian and docent.

For a town like Oak Grove, situated on the Kansas plains, paper was ordered and arrived on large rolls by wagon or by train. Once delivered, it was cut into the desired size. 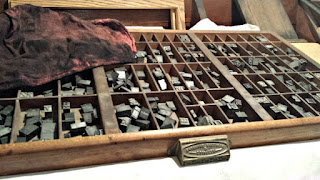 Type was made of a composite of cast iron and steel. The most common were Wisconsin type and Hamilton type. Type was stored in type-cases – large drawers with many different sized compartments. The higher or upper case held capital letters. The lower case held… you got it…lower-case type.

The compositor or typesetter (or in my story – Abigail or her brother, Teddy White) – removes a piece of type from one of the compartments of the type case and places it in the composing stick. Not so difficult until you realize this had to be done working from left to right and bottom to top, placing the letters upside-down! Can you tell what this type says? (Answer at bottom of post.)


The composer stick was the width of the column that would be used in the paper. The one at Midway Village was manufactured in Chicago by the H.B. Rouse Company which was a common national supplier of these devices in the U.S. The type would first be arranged in this and then transferred to a large frame.

For pictures, the newspaper office would purchase a few etchings from a factory, and then used them in numerous ways. For example – an etching of pine trees to be used at Christmastime or a fancy United States Flag etching to be used on National Holidays such as the Fourth of July. Local companies that used the newspaper for sale announcements would have their own etchings made and supply them to the newspapers to be used frequently over the years.

Printer’s ink was oil-based, thick and tarry. It won’t spill if turned upside down. On cold days, the ink didn’t flow well and would become so thick that it would create a blob on the letters and thus on the paper if used. A blade would be used to scoop it up and spread it on a flat plate. Here you can see the round, disk-like flat plate.

The plate would be pressed against the letters and then against a piece of paper. A rhythm would start up, and if not very careful, the plate could easily smash fingers. For newspapermen, it was the middle two fingers that most often were smashed or severed.

With the linotypes of the 1870s and 1880s, “printer’s disease” was a danger.  It was contracted by working with lead in the linotype. The workers would absorb the lead through their skin and get lead poisoning. These types of printers were in the larger cities and so I didn’t make mention of it in Christmas With the Outlaw. 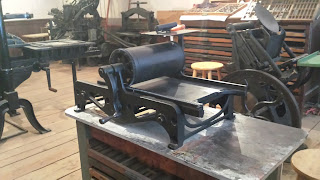 A “galley proof” or test copy was always made before any further papers were printed. This was to ensure that the type had been set accurately. A piece of type could accidentally be stored in the wrong case and as rapidly as the apprentice had to work, it could end up being placed back into a composing stick. The metal type, being comparably soft, could also become damaged or worn.

Once the galley proof was checked and last-minute corrections were incorporated, the type would be fixed in the frame to ready it for printing.

A rope stretched across the length of the newspaper office so that once printed, pages could be placed over the rope for drying. Once the ink was dry on the “front,” the back side of the paper could then be printed upon.

It was a dirty job and as you’ve read…could be dangerous. The large paper cutters could easily cut off fingers that got in the way! Newspaper men had ink-stained fingers and they often worked overnight to get the paper out in the morning.

In Christmas With the Outlaw, siblings Teddy and Abigail put out a weekly paper so the pace is do-able. They inherited their printing press from their parents and transported it by wagon to Oak Grove, looking for a fresh start in a growing new town. Abigail is also the town reporter and takes her job seriously. 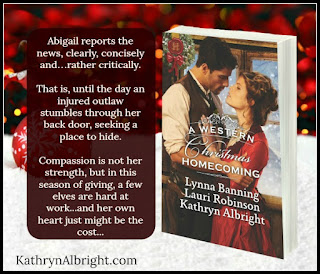 Oh yes! And the answer to the above type in the composing stick is:

The quick brown fox jumps over the lazy dog and feels
as if he were in the seventh heaven of typography.