From Longhorns to No Horns!

Recently, I had to research different types of cattle here in America for my most newest story, Wedding at Rocking S Ranch that takes place on a ranch. Oak Grove was a railroad town that blossomed as a result of its location and the cattle drives from Texas. Sure, Longhorns came from Texas, but was that the kind of cattle that would be found on a ranch in Kansas? I had to know. I also had to check the history of barbed wire.

1870 marked the start of the big cattle drives into Kansas. 300,00 arrived that year. The next year that amount doubled. Three-fifths of the cattle were "stock cattle" which means they were yearlings, heifers, cows and steers younger than four years old. Abilene, Kansas, Wichita and Dodge City became the towns (and later cities) that truly boomed with the transporting of cattle to market. 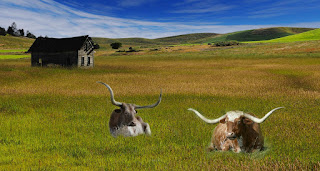 Many of the Longhorns didn't immediately board the train and head to points farther east, but wintered in Kansas, existing on the buffalo-grass prairie. Although barbed wire had been invented and was in use, the sectioning off of large parcels of land hadn't happened yet in Kansas in 1879 at the time my story takes place. Cattle still roamed free and had to be watched over by cowboys. At the Rocking S Ranch, the ranch-house and the crops had fences around them to keep the cattle out of the corn and alfalfa. This was known as "fenced out." Further east, a farmer would use wood and barbed wire to enclose a pasture, which was known as "fenced in."

In my story, I have the owner of the ranch looking into crossbreeding his longhorns with another breed of cattle to make a healthier, more profitable herd. He has brought in Black Angus to give this a try. Black Angus first came to Kansas in 1873 when George Grant transported them from Scotland. Where the longhorns were hardy, they were a tougher meat and had a wild-streak and could be difficult to manage. Angus had a gentle nature and were more susceptible to extremes in weather. Their meat is more tender and has a better flavor that the longhorns. Angus weigh between 850 and 1000 pounds when mature.

When Grant took his four Angus bulls to the fair in Kansas City Livestock Exposition that year, the local people didn't know what to think of them. These cattle had no horns! (Called polled, which means naturally hornless.) But Grant had the last laugh when he successfully crossed his bulls with native Texas longhorns. The calves were hardier, hornless, and weighed more. Between 1878 and 1883, twelve hundred Angus cattle were imported to the Midwest. Cross-breeding has steadily improved the hardiness of the Angus here in America.

And there are Red Angus! Red Angus occur as the result of a recessive gene. They are the same as their black relatives except they are actually more tolerant of the hot weather. At one time, The Angus Association barred the registration of Red Angus in an attempt to promote a solid black breed. Likely that is one of the reasons they are fewer in number. Eventually, The Red Angus Association of America formed when breeders searched out and collected the Red Angus from the black herds. 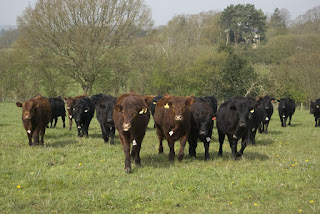 Although I used a lot of this information in Wedding at Rocking S Ranch, it was sprinkled in with a light touch. In historical romance, it is the relationship between the two protagonists that carry the story after all! 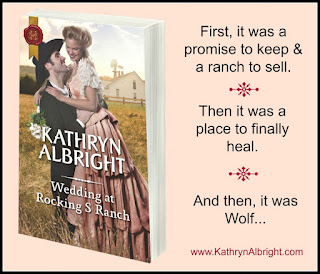 When Cassandra Stewart fulfills her husband’s dying wish by visiting the ranch he loved, she plans to sell it. But then she meets his best friend. As aloof, ruggedly handsome Wolf shows Cassandra the value of life in the prairies, tenderness begins to grow from their shared pain into something more…
Maybe there’s a future for her at the Rocking S Ranch after all…

"The plot was riveting. I couldn’t put it down even when it was well past my bed time."
Long & Short Reviews
Available at Amazon, Harlequin, and Barnes and Noble!