The Mercantile of the Old West


As pioneers, cowboys, and businessmen moved west, they built up towns in the places they settled. As towns sprung up, the people running farms or working and living there needed supplies. They needed everything they couldn't grow, kill, or make themselves.

So unlike most of us, they couldn't just skip off down to the grocery store and pick up a loaf of bread and a jar of jam. They weren't able to simply swing by Target to grab a new dress, a broom, and a milk pail. They'd be making the bread and the jam themselves, most likely, but they'd need flour and sugar or bowls and crockery. They made most of their own clothes, but they did need fabric, thread, buttons, and such. Seeds to plant their gardens and boots to wear while doing it were all found in the mercantile.

Most of the larger cities in the east had general stores, but they also had specialty shops. Dress shops, hat shops, haberdasheries for men's clothing, kitchen supply stores, fabric stores, shoe shops. The western towns normally didn't have such luxuries. Most everything they needed was found all in one place. The mercantile. 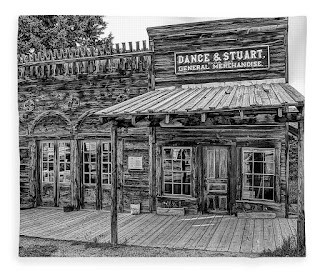 For those living on ranches and farms outside town, making the trip to the mercantile was a big deal since the tools and materials they needed for every day work were there. Another reason going into town to the mercantile was a big deal was that they couldn't afford to forget anything because it would be an ordeal to come back for what was forgotten.


A mercantile store in the old west was vital. It was their means to get the items they needed, but it also served as a social gathering spot in many of the western towns. People who lived out on the farms, enjoyed catching up with friends they saw when they stopped in to the mercantile to stock up. Many times the mercantile also served as the post office, so pick up mail and dropping off letters was another opportunity to socialize.

The mercantile owner was an entrepreneur. The business was his to run as he saw fit. He could extend credit to people he knew and trusted or he could only accept cash. He could barter with other local businesses, such as the blacksmith or the tailor. He could allow local farms to swap eggs and milk for tools or shoes.

Most mercantile stores in the old western towns were monopolies. The townspeople had no other options - at least none that were practical or desirable. So, the owner made his own rules and his decisions were usually final. More often than not, though, the owner was a benevolent soul who helped out the less fortunate when he could.

The hero in my latest Colorado Matchmakers Series, Cade Jones, was  the mercantile owner in Rocky Ridge, Colorado. A widower with four young children, he was finding it difficult to raise his family and run his store. He needed help. He needed a wife. So, as a savvy business man solves problems, Cade goes to the local matchmaker to get some help.

As luck would have it, the perfect match for Cade drops into his lap with a little help from Susannah Jessup, the local matchmaker.

If you're interested in reading the sweet story of how Cade manages to fall in love and run his thriving mercantile at the same time, you can find it on Amazon. 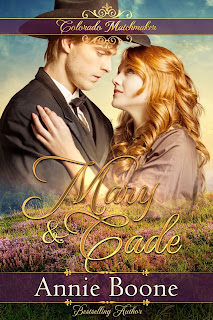 Follow Annie on Amazon, Bookbub and get email updates.
Posted by Annie Boone at 1:00 AM