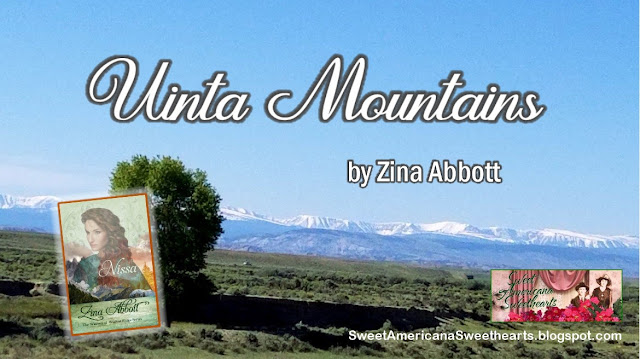 
Most of the high peaks are outcrops of the Uinta Mountain Group. Many of the peaks are ringed with bands of cliffs, rising to form broad or flat tops. The mountains are bounded to the north and south by reverse faults that meet below the range, on the north by the North Flank fault and on the south by the Uinta Basin boundary fault.

The high Uintas were extensively glaciated during the last ice age, and most of the large stream valleys on both the north and south sides of the range held long valley glaciers. Even though some peaks reach as high as over 13,500 feet in elevation, the dry climate of today has resulted in there being no glaciers that have survived. The Uintas are the most poleward mountain range in the world to reach over 13,000 feet without modern glaciers, and are the highest mountain range in the contiguous United States with no glaciers. They do have permafrost at elevations above 10,000 feet. If you wish to know more about the heavy-duty science stuff like which era the rocks were formed and pushed up to where they are today, I’ll refer you to Wikipedia.

Large portions of the mountain range receive over 40 inches of precipitation annually. That's a lot of snow and rain. The highest peaks remain snowcapped most of the year except for late July through early September.

The Uinta Mountains have more than 400 miles of streams and 1,000 lakes and ponds.  It is part of the Wasatch and Uinta montane forests ecoregion. Nearly the entire range lies within Uinta-Wasatch-Cache National Forest on the north and west and Ashley National Forest on the south and east. Because it does run east to west, it sort of T-bones these other ranges. The highest peaks of the range are protected as part of the High Uintas Wilderness. The forests contain many species of trees plus many species of grasses, shrubs, and flowering plants.

The Bear and Weber rivers, the two largest tributaries of Great Salt Lake, start on the west slope of the range. The Provo River, the largest tributary to Utah Lake, begins on the southern side of the range and flows west to Utah Lake, which itself drains via the Jordan River into Great Salt Lake.
The south and east sides of the range are largely within the Colorado River watershed, including the Blacks Fork and the Duchesne River, which are tributaries of the Green River. The Green is the major tributary of the Colorado River. All that water means there are about 500 small lakes, one of the most popular being Mirror Lake.
This past June I traveled throughout Wyoming. From Interstate 80, I was able to look to the south and see this mountain range—very impressive with all the snow that time of year. (See my title header.) Little did I know then I would be writing two books for a series set in those mountains. I passed through Evanston, Wyoming (been there several times) which is the biggest town north of the setting of the book. It is where folks then and now caught the trains on the Trans-Continental Railroad.

I recently put my first book in The Widows of Wildcat Ridge series, Nissa, on preorder. To read the book description and access the purchase link, PLEASE CLICK HERE. The book will be released October 15th. My second book, Diantha, will be published in April.

The following is a snippet from the book: 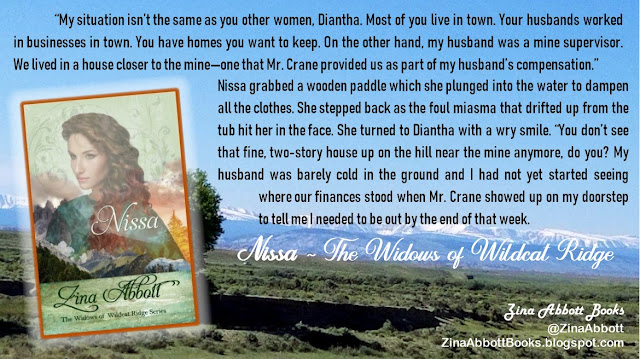 Posted by Zina Abbott Author at 1:32 AM