How Emigrants Live on their way across the Continent: 1877 -- by Kristin Holt 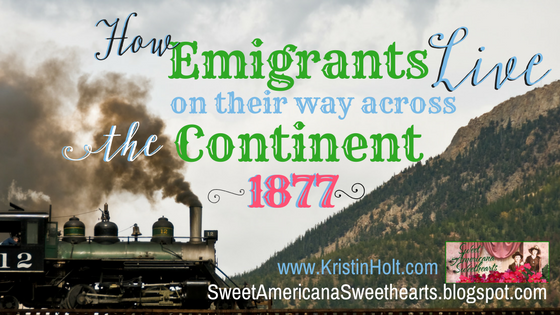 I'm fascinated by everyday life in America's Victorian Era. Little elements that everyone in 1877, for example, knew as commonly as we know what it means to "click on an icon". Useless, as far as foreign phrases go, to traveler across the American plains in the latter half of the nineteenth century--and most two-year-olds today know how to play games on an iPad.

Times change. That precise element--everything old is new again--contributes to the fascination readers find in books set in the American Old West. How did people find out a train's schedule? How much did passage cost? When did trains with vestibule (walking pathways) connections become commonplace? How were cars heated in the winter? What did travelers eat?

You might be familiar with Harvey Houses or Station Houses (eateries along the rail at stops). I've always read that outside of Harvey's Houses, created to fill that very need in the market, station restaurants served atrocious food. Poor quality, often spoiled, inedible food. To my delight and surprise, I came across this newspaper article from The True Northerner of Paw Paw, Michigan on May 4, 1877, wherein the unnamed newspaper columnist tells the curious reader how emigrants live on the trains, what necessities cost, and that  mothers traveling with children launder clothing and cook (can you imagine?) on the moving train. 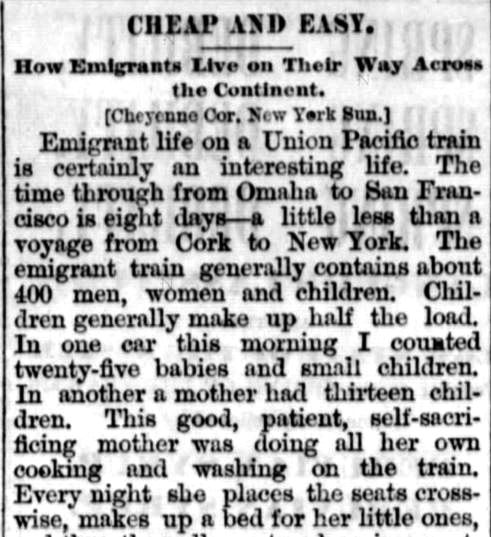 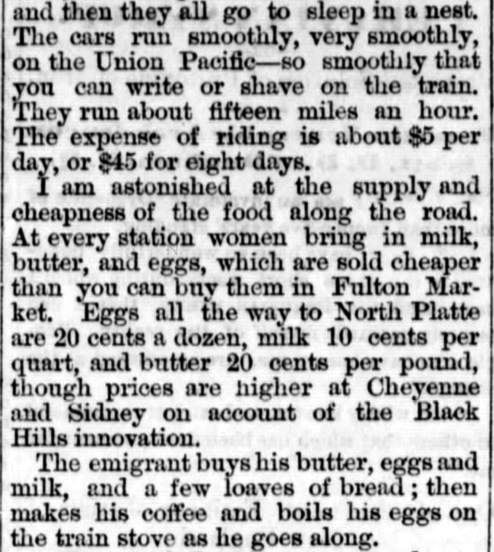 Note: all price comparisons (from 1877 to 2016 [latest year offered by this source]) were prepared using The Inflation Calculator: WestEgg.com/Inflation 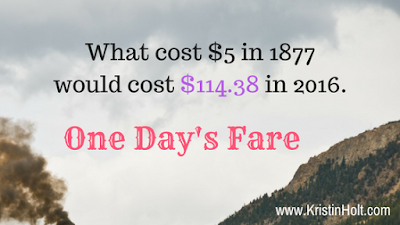 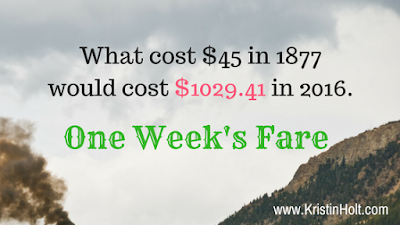 The writer was "astonished at the supply and cheapness (frequently used in a positive light, a.k.a. "affordable", "excellent price", in the 19th century) of the food along the road." 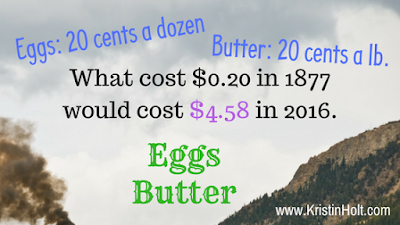 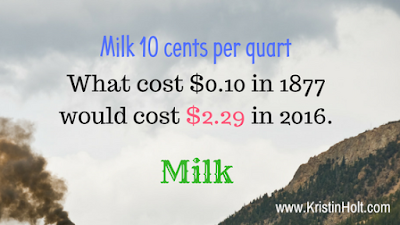 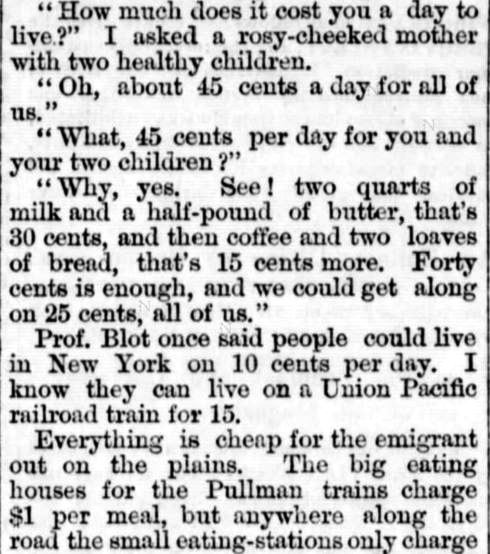 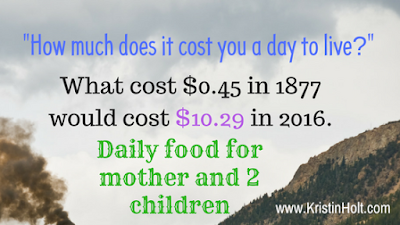 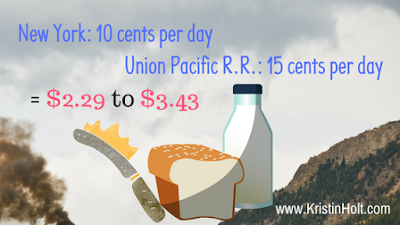 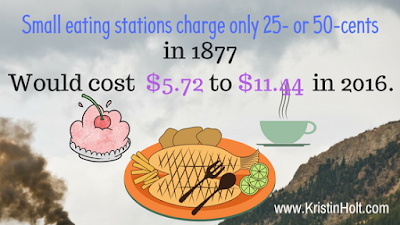 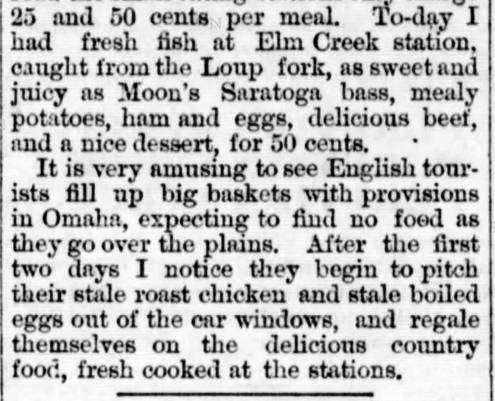 The prices attached to train fare and foods purchased may not seem irrational to you or me. We dine out and easily spend within the range charged at the finer Pullman eating houses. I feel compassion, though, for emigrants who sold everything they own in order to afford passage from Europe aboard a ship, then rail fare (expensive compared to airfare today!). Simply feeding each member of the family, meeting daily needs, and having anything leftover with which to start new in America must have been difficult.

No wonder emigrants cooked what they could aboard the train (atop the cast-iron stove used in winter to heat the car, I assume), purchased ready-to-eat foods along the way (bread, butter, milk), and thereby decreased expenses.

Many emigrants suffered hunger, deprivation, and fear, exacerbated by language barriers. This article showed a lighter side to my overall impression of the emigrant's plight. I guess if newcomers to America had enough resources to travel by train, life may have been as simple and affordable and easy as this newspaper article makes it seem. 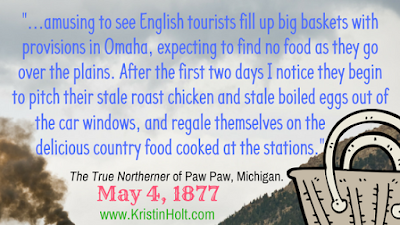 Have you read a novel or novella that contains emigrants traveling by train toward their  new home in western United States (or Territories) in the nineteenth century?


How does this article shed light on your understanding of nineteenth century train travel?


Please scroll down and reply. I'd love to hear from you! 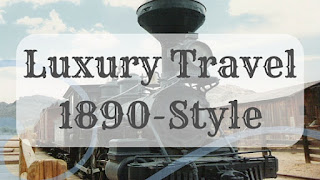 Want to know more about Fred Harvey (of the famous "Harvey House")? 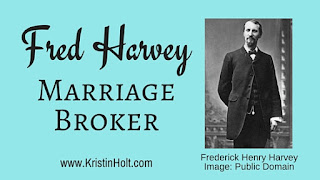 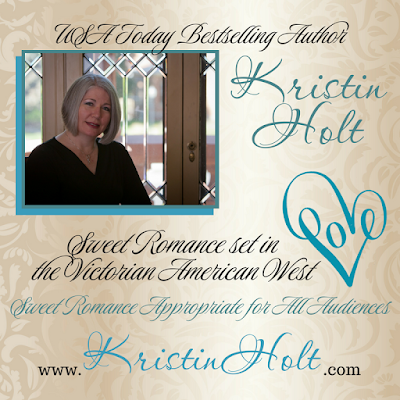