Housekeeping in the 1800s - Not Quite the Pied Piper 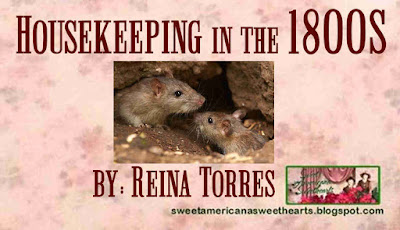 Even in the Victorian Era an the American Old West, poison was an item that was a little disconcerting. It's not hard to imagine that housekeepers were interested in finding a way to control pests without possibly poisoning the rest of the household...

**The information below comes from a Ladies Magazine of the period, but I have NO IDEA if it's either viable to use for the purpose, and I do NOT know if the methods are safe to use**


DRIVING RATS AWAY WITHOUT POISON. -

First, the old French plan. This is followed, chiefly in Paris, by men who make it a special business. They take a deep tub, with water on the bottom, and a little elevation in the middle like an island, on which is only a place for just one rat to sit on. This trap is covered and has a large balance-valve opening downward. On the middle of this valve a piece of fried pork or cheese is placed, and when the rat walks on it to get the cheese the valve goes down, drops the rat into the water, and moves back in position. A road is made from the rat-hole to the top of the tub by means of pieces of board rubbed with cheese, so as to make the walk more attractive for the rats. In the course of the night, some ten, twenty, or even more rats may go down, and if the island was not there, they would be found most all alive in the morning, quietly swimming around; but the provision of the little island saves the trouble of killing them, because their egotistic instinct of preservation causes them to fight for the exclusive possession of the island on which, in the morning, the strongest rat is found in solitary possession, all others being killed and drowned, all around him.

Second, the New York plan, invented by one of the Friends. The floor, near the rat hole is covered with a thin layer of a most caustic potassa. When the rats walk on this it makes their feet sore; these they lick with their tongues, which makes their mouth sore, and the result is that they shun the locality, not alone, but appear to tell all the rats in the neighborhood about it, and eventually the house is entirely abandoned by them, notwithstanding the houses around are full of rats.

VOCABULARY -
Potassa is an older name for Potassium Hydroxide
Friends, I believe, is a reference to Quakers

Which method would you prefer to use?