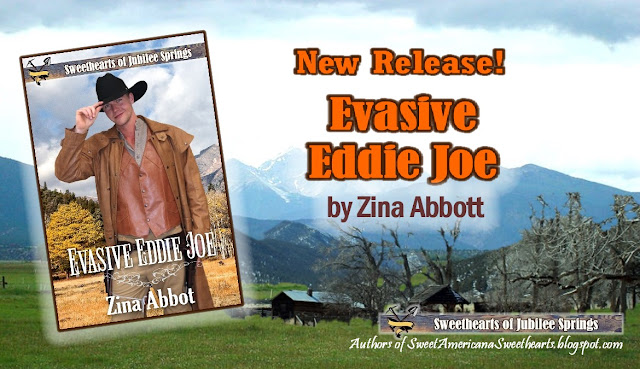 No tricks! Only a treat....
Today I am pleased to announce the release of
Evasive Eddie Joe
Book 15 in the Sweethearts of Jubilee Springs series
and my fifth book
by Zina Abbott 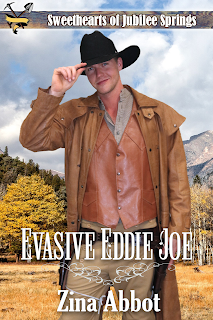 Edmond Joseph “Eddie Joe” Hampton, foreman for the Jacobson Ranch in Monarch Bend, had his own reasons for encouraging his boss to marry and start a family. Once he signed up with the Colorado Bridal Agency while Lizett Millard was in Jubilee Springs on Independence Day, July 4th, he figured it will be easier to persuade his boss to allow him to build a separate house and live as a married foreman on the ranch if the man is enjoying his own wedded bliss. As wily as Eddie Joe can be, he has to work hard to stay ahead of his boss who has shown no interest in marriage. He knows he can pull it off—as long as his plot isn’t discovered too soon.
Etta Crabtree, an impoverished young widow of an abusive first husband, cannot stay at her widowed mother’s home. She has been corresponding with Eddie Joe, and arrives in Jubilee Springs with other brides intended for the town’s miners. The miners claim they have priority on all brides coming to Jubilee Springs until all ten men who signed up for brides and mining company housing are married.
Who will win Etta Crabtree’s hand in marriage, the cowboy or one of the miners?

Early that morning, Eddie Joe rousted Rusty out of bed to hitch the horses to the buckboard while he finished dressing and helped Juanita load the quilts and picnic baskets for the trip. In good weather like this, Juanita packed a picnic lunch for herself, plus she prepared food for Eddie Joe in case he didn’t choose to eat at the River Valley Inn restaurant or the Corner Saloon that also served a limited fare.
Once they were on their way as the last of the morning stars disappeared and the eastern sky began to turn pink, the two traveled in silence. That was fine with Eddie Joe. He didn’t have much to say to the older woman, even though she spoke good English in addition to her native Spanish. He didn’t know much about her other than before he started working for Zeb Jacobson, she had come to the ranch with her husband. After her husband had died about ten years earlier, she stayed on to keep house for the boss.
As soon as they arrived in Jubilee Springs, Eddie Joe turned the horses down Church Street in the direction of the Catholic church. He dropped Juanita off with the promise he would collect her mid-afternoon.
As he guided the horses up River Road, Eddie Joe broke out into a smile. While the older woman would enjoy her Mass and a picnic lunch with a few of her fellow Catholic friends, he would look around town and catch up on the latest news. The best place for that was the city park between the community church and the schoolhouse where the Protestants had their own Sunday picnic after church. He preferred to wait there, because it was mostly townspeople, and they tended to be hospitable. The few miners who came to church were usually well-behaved enough they refrained from giving a lone cowboy in their midst a ration of hassle. It was the saloons, the bowling lanes and Helsa Bath House where he had to watch out for miners looking to pick a fight. He’d have to wait until church let out, but that would give him enough time to take the horses over to Johnny B. at the livery for some well-deserved rest, water and feed.
Halfway down Main Street, just before he reached the front of the Brinks Mercantile, Eddie Joe pulled back on the leads to stop the horses. He leaned forward, unable to believe what he saw. Exiting the Howard Boarding House on the other side of the mercantile was a crowd of women. Eddie Joe squinted. Respectable ladies, by the looks of them, not to mention Daniel and Clara Howard would not allow the other kind into their boarding house. The Jubilee Springs prostitutes may come to town to shop during the week, but they lived and worked across the river at the Silver Dollar Saloon. But, no, what Eddie Joe witnessed in this town he knew was extremely short of women were at least a handful of ladies, mostly his age or younger. Two were dressed like high-society women—or what Eddie Joe guessed high-society women dressed like. The rest he supposed were in their Sunday best, whether that amounted to calico or linsey-woolsey. A couple of the ladies that left the boarding house walked with men Eddie Joe did not recognize. Hats and gloves completed the outfits. At least two ladies held books clutched in their hands.
Since when did Jubilee Springs get a wagonload of women?
Keeping hold of the leads, Eddie Joe folded his arms and leaned back as his characteristic wide, toothy grin split his face. This particular Sunday was starting to get real interesting.

Evasive Eddie Joe will be available at the New Release price of $.99 through Wednesday, November 1, 2017, at which time it will return to its regular price of $1.99. This novella is also available on Kindle Unlimited. 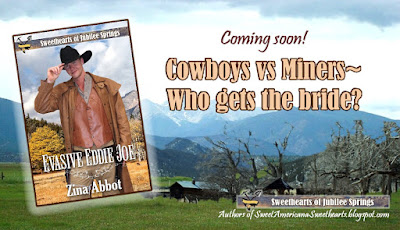 This book is part of the "Harvest Dance 1881 in Jubilee Springs" group. To purchase my first book in this collection, Dead Set Delphinia, please CLICK HERE. 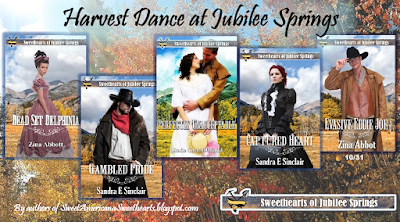 Posted by Zina Abbott Author at 9:14 AM