California history!
TRUCKEE, Calif. —  Western stagecoach companies were big business in the latter half of the 19th century. In addition to passengers and freight, stages hauled gold and silver bullion as well as mining company payrolls.   Stage robbery was a constant danger and bandits employed many strategies to ambush a stagecoach. Thieves rarely met with much resistance from stage drivers, since they had passenger safety foremost in mind. The gang was usually after the Wells Fargo money box with its valuable contents. Passengers were seldom hurt, but they were certainly relieved of their cash, watches and jewelry. Before the completion of the transcontinental railroad over Donner Pass in 1868, the only transportation through the Sierra was by stage. Rugged teamsters held rein over six wild-eyed horses as they tore along the precipitous mountain trails. The stagecoaches were driven by skilled and fearless men who pushed themselves and their spirited horses to the limit.

One of the most famous drivers was Charles Darkey Parkhurst, who had come west from New England in 1852 seeking his fortune in the Gold Rush. He spent 15 years running stages, sometimes partnering with Hank Monk, the celebrated driver from Carson City. Over the years, Pankhurst’s reputation as an expert whip grew. From 20 feet away he could slice open the end of an envelope or cut a cigar out of a man’s mouth. Parkhurst smoked cigars, chewed wads of tobacco, drank with the best of them, and exuded supreme confidence behind the reins. His judgment was sound and pleasant manners won him many friends. One afternoon as Charley drove down from Carson Pass the lead horses veered off the road and a wrenching jolt threw him from the rig. He hung on to the reins as the horses dragged him along on his stomach.  Amazingly, Parkhurst managed to steer the frightened horses back onto the road and save all his grateful passengers.
NO PATIENCE FOR CROOKS
During the 1850s, bands of surly highwaymen stalked the roads. These outlaws would level their shotguns at stage drivers and shout, “Throw down the gold box!” Charley Parkhurst had no patience for the crooks despite their demands and threatening gestures. The most notorious road agent was nicknamed “Sugarfoot.” When he and his gang accosted Charley’s stage, it was the last robbery the thief ever attempted. Charley cracked his whip defiantly, and when his horses bolted, he turned around and fired his revolver at the crooks. Sugarfoot was later found dead with a fatal bullet wound in his stomach.
In appreciation of his bravery, Wells Fargo presented Parkhurst with a large watch and chain made of solid gold. In 1865, Parkhurst grew tired of the demanding job of driving and he opened his own stage station. He later sold the business and retired to a ranch near Soquel, Calif. The years slipped by and Charley died on Dec. 29, 1879, at the age of 67. A few days later, the Sacramento Daily Bee published his obituary. It read; “On Sunday last, there died a person known as Charley Parkhurst, aged 67, who was well-known to old residents as a stage driver. He was in early days accounted one of the most expert manipulators of the reins who ever sat on the box of a coach. It was discovered when friendly hands were preparing him for his final rest, that Charley Parkhurst was unmistakably a well-developed woman!”
NOT LIKE OTHER MEN, ER, WOMEN?
Once it was discovered that Charley was a woman, there were plenty of people to say they had always thought he wasn’t like other men. Even though he wore leather gloves summer and winter, many noticed that his hands were small and smooth. He slept in the stables with his beloved horses and was never known to have had a girlfriend. Charley never volunteered clues to her past. Loose fitting clothing hid her femininity and after a horse kicked her, an eye patch over one eye helped conceal her face. She weighed 175 pounds, could handle herself in a fistfight and drank whiskey like one of the boys.
It turns out that Charley’s real name was Charlotte Parkhurst. Abandoned as a child, she was raised in a New Hampshire orphanage unloved and surrounded by poverty. Charlotte ran away when she was 15 years old and soon discovered that life in the working world was easier for men. So she decided to masquerade as one for the rest of her life. 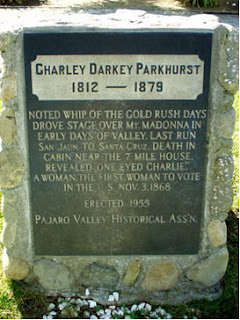 The rest is history. Well, almost. There is one last thing. On November 3, 1868, Charlotte Parkhurst cast her vote in the national election, dressed as a man. She became the first woman to vote in the United States, 52 years before Congress passed the 19th amendment giving American women the right to vote.
Posted by Penny's Tales at 3:48 AM