My novella, Too Old for Christmas, is set in 1854 Columbia, California, which in the early days of the California gold rush was known as the Gem of the Southern Mines. Among the majestic pines, the stately oaks, the brilliant Manzanita plants of the western Sierra-Nevada foothills, known to us Californians and the Mother Lode region, is another plant not as impressive. However, you ignore this plant at your own peril. If you come in physical contact with it, it will make its presence known with a vengeance.

The western poison oak plant (Toxicodendron diversilobum) is related to the poison ivy plant and poison sumac plant. The plant looks like a leafy shrub and can grow up to six feet tall. In shady areas, the plant can grow like a climbing vine. The leaves usually have three separate leaflets, but there can be up to nine leaflets, each about one to four inches long. Poison ivy, poison oak, and poison sumac belong to the cashew family. Poison ivy is a vine and like poison oak, poison sumac is a shrub. 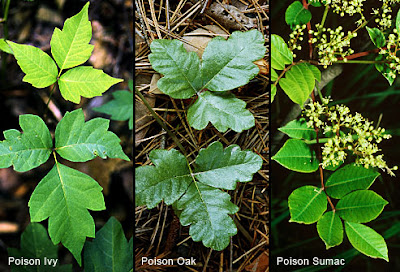 In spring, the leaves can be red or green. The plant produces small white, yellow, or green flowers. During the summer, leaves are green and the plant grows berries. In late summer, the leaves turn red and orange. The plant is winter deciduous. Once cold weather sets in, the stems are leafless and bear only the occasional cluster of berries. Without leaves the stems may sometimes be identified by occasional black marks where its milky sap may have oozed and dried.

The time period of Too Old for Christmas is mid-November through Christmas, 1854. Columbia was still a fairly new community, so chances are that there were still several wooded sections where poison oak abounded. Here is a small excerpt from the novel:

Benjy stood next to his mother. Sean noticed his legs crossed and his hand clamped over his front.
Sean groaned and slunk down behind the wagon sideboard. “No need to be yelling, young Benjy.”
“But, I…”
“Hush,” his mother leaned over and took him by the shoulders. “His head is probably pounding.” She looked up at Sean. “I didn’t see the necessary on my way up, Mr. Flood.”
“I nay have got around to digging the necessary pit, yet, Mrs. McNair. You be needing to take him in the woods behind the cabin. Uphill. There be a patch of poison oak on the downhill slope I still be needing to cut out. The leaves be dropped, but the branches still be full of poison.”
Sean did his best to ignore the baleful look he received when he glanced at her face to gauge her reaction. He decided right then as soon as the roof was on his cabin, it was time to build the necessary.

The all release an oil called urushiol, which similar to carbolic acid, when damaged. The allergen is absorbed into a person’s skin when the plant is touched. Most people who come in contact with this toxin will do so when they brush their skin or clothing against the plant. As long as the oil remains, it can be transferred to another person. Burning poison oak can disperse the oils in smoke, leading to severe respiratory problems and lung irritation. The best way to prevent poison oak rash is to learn to recognize the plant and avoid contact with it.

About 85-90% of people are allergic to urushoil and will develop a reaction which will appear within one to six days after exposure. The first symptoms are stinging, itching, and minor skin irritation. Eventually, the affected areas of the skin will break out in a red rash that gets itchier as it progresses. The rash will be worse in the areas that had direct contact with the plant. Bumps will start to form and eventually turn into large blisters that ooze liquid. Within a few days, the blisters will begin to dry up and form a crust. The rash usually peaks about a week after exposure and lasts 5 to 12 days although in rare cases it can last up to a month.

Trust me when I say that if you want to experience the “joy” of watching someone suffer with poison oak, all you have to do is send a son on a Boy Scout camping trip to the Sierra foothills with an inexperienced scoutmaster who does not recognize poison oak and/or does not do a thorough job of training the boys to recognize and avoid contact with poison oak. My son returned from one such trip only to break out in red blisters that itched like crazy. Caladryl did not cut the itch, and I didn’t know at the time that I should always keep a heavy-duty anti-histamine on hand in my medicine cabinet/first aid box for just such exposures. After a trip to the doctor, an investment in an anti-histamine and an anti-itch oral medication plus a third prescription for anti-itch cream, and after about four days at home suffering and being drowsy from the medication, he was finally able to return to school.

In Too Old for Christmas, Sean Flood, when talking to the McNair brothers, referred to trees entwined with poison oak as “unfriendly trees.” Here is another excerpt:
With his free hand, Jesse also gripped the wood handle of a shovel propped on his shoulder.
“Here’s your chicken soup Ma made you,” Jesse said as he held out his jar.
Sean noticed the boy’s unhappy expression. “Aye, and I thank you and your ma, Jesse.” Sean also reached out to take the jar Benjy handed him. “Why so glum, Jesse? I could have come get my own soup if I’d known ‘twas a burden for you.”
“It’s not that, Mr. Flood.” The boy heaved a sigh of resignation.
“Jesse don’t like digging holes,” Benjy chimed in. “Ma sent him up to dig a pit for your necessary.”
Sean raised an eyebrow as he turned back to study Jesse. “Nay, I’ll be digging my own, Jesse. There be no need you doing it for me. Just haven’t gotten around to it, now have I? ‘Til I do, we’ll just stand next to a friendly tree, now won’t we?”
“Benjy doesn’t know how to tell if a tree is friendly or not, Mr. Flood.” Jesse wrinkled his brow. “I’m not so sure I can always tell this time of year, either, now the poison oaks have dropped their leaves. Ma won’t let us come here anymore unless you have a necessary so she doesn’t have to worry we’ll get into something to make us all blistery and itchy.”

Some people get confused over where you will find the different species. The Western poison oak is found in (surprisingly enough) the western part of the United States and Canada. There is an eastern variety generally found in the South-Eastern part of the United States. Here is a map that shows the predominate locations of the various poisonous plants from this family.

So, this Christmas, deck your halls with holly and ivy—the non-poisonous kind—but if you live in areas where poison oak abounds, that is one vine you want to steer clear of.

Zina Abbott is the pen name used by Robyn Echols for her historical novels.
The author currently lives with her husband in California near the “Gateway to Yosemite.” She is a member of Women Writing the West, American Night Writers Association, and Modesto Writers Meet Up. She enjoys any kind of history including family history. When she is not piecing together novel plots, she pieces together quilt blocks.

Watch for poison oak when you deck your halls in TOO OLD IN COLUMBIA http://bit.ly/1YfnjBf
#TooOldSeries #ZinaAbbott
Posted by Zina Abbott Author at 1:00 AM

Email ThisBlogThis!Share to TwitterShare to FacebookShare to Pinterest
Labels: Poison Oak, Too Old for Christmas, Too Old in Columbia Series, Zina Abbott