Good morning, Robyn and thanks so much for letting me barge in today.

The American Mail Order Bride Series involves a mail order bride for every state in the union!  All 50 stories take place in 1890 and they are all attached, someway, to a prequel.  All these women work at a textile mill in Boston that burns to the ground.

The manager of the mill, a single woman herself, knows a woman who runs a mail order bride business.  She calls the women together and tells them about this matchmaker.  What other choice do they have?

I was so honored when the group of authors that put together this unprecedented project asked me to be a part of it!  I was born in Iowa, but moved to Arizona at the ripe old age of two.  My mother was raised in West Liberty, IA, where she had fifteen brothers and sisters, which means the small town of West Liberty is comprised of LOTS of my cousins!  LOL!

Hannah: Bride of Iowa takes place right outside of West Liberty.  It was fun researching the history of where my mom and dad lived.  What really blew my mind is when the editor of The West Liberty Index got wind of my story, he actually interviewed me and I landed on the front page! 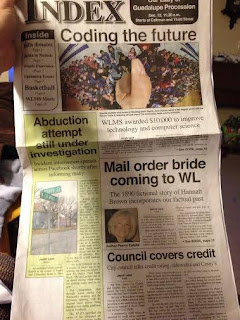 This has been a fabulous project to be involved with and I truly enjoyed writing Hannah: Bride of Iowa! It will be released on December 17 but is up for preorder right now! 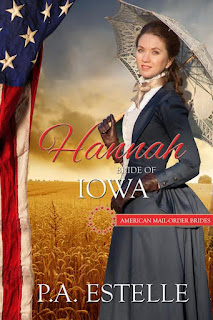 Samuel Morrison, a farmer from Iowa, is in need of a wife and a mother for Lizzie, his three-year old daughter.  He reads an article from Massachusetts advertising mail order brides. He writes to the agency stating he’s looking for a partner who will work by his side and, hopefully, come to care for him and be a loving mother to Lizzie.
Hannah Brown responds to his letter.  Though she doesn’t say too much about herself, Samuel decides to take a chance and asks her to come to Iowa.
This woman is everything he wants in a wife and more -- or so he thinks.  Hannah has a secret that, if revealed, could devastate their future.
If Hannah tells Samuel, would he send her away?  She could lose all she’s come to cherish with Samuel and Lizzie.  Is Hannah willing to take that chance?

Excerpt
They were halfway home when two riders approached. Maddie’s eyes went wide when, out of nowhere, a rifle appeared on Samuel’s lap. “Just being cautious,” he muttered.
The two men pulled their horses up short when they reached the wagon. “Morrison,” said the rider who looked oldest. His hat sat low on his head covering his eyes, giving Maddie an uneasy feeling.
“Carl.” Samuel’s voice was low. “How’s your pa?”
“Sits in his chair all day not doing a dang thing. Don’t eat much and don’t talk, which is fine with me.”
“Who’s this purty thing you got there, Morrison?” Maddie shivered at the sight of the younger rider. His hair was long and dirty and stuck to the side of his face. He spit a stream of tobacco, a bit stayed behind to make its way down his chin. When he smiled, rotten teeth filled his mouth.
Samuel stiffened, saying nothing to the man. The puppy threw his head back and began to cry and yelp. “I don’t like being not talked to, Morrison, like I’m some sort of white trash. Maybe you couldn’t hear me none cause of this here mutt.” He drew a gun from his holster. “And maybe I should take care of it so you could hear me.”
In a flash, Samuel had the rifle cocked and trained on the man’s heart.
“No!” Lizzy cried, turning to try to get into the back of the wagon. Maddie grabbed her and struggled to hold the screaming little girl on her lap while watching Samuel. She had no doubt he’d kill the man without blinking an eye if he needed to.
“Put your gun away, Chad,” the other rider growled, disgust evident in his tone. “Sometimes you ain’t got no sense at all.”
“There be two of us,” Chad argued loudly.
“I said, put it away.” Carl’s tone was dangerous and Chad did as he was told.

A bit about me…..
I write for all ages, from the early reader to adults.  My books range from pictures books for the little ones, to fantasy, time-travel adventures for ages 9 to 13. I also write adult stories, including a family drama and contemporary, paranormal and historical westerns romances, under P. A. Estelle.

I was a school secretary for 21 years.  My husband and I moved to our retirement home in Kingman, AZ, on very rural 54 acres, living on solar and wind only.
More about my books can be found in the following links:

This project has made publishing history and has been more than 6 months in the making. Called The American Mail Order Brides Series, there are 50 books from 45 authors. Starting on November 19, there will one book published per day through to January 7, 2016. Each story is 35K - 40K in length and priced at $2.99.
For more information on release dates, the free prequel which ties the stories together, and each story, visit:   http://www.newwesternromance.com/
Posted by Penny's Tales at 1:00 AM