When Tessa Darrow discovers her father burning his Confederate uniform, she has no idea that his secret torment will devastate their family and drive them from their home in North Carolina. In 1865, her family treks along the Oregon Trail until tragedy strikes, leaving Tessa and her father to build a new life in Soda Springs, Idaho, a town settled by a group of exiled Mormons. 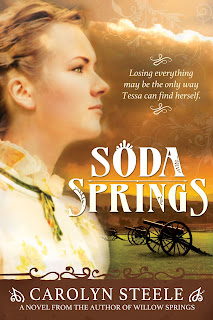 But life in the West doesn’t mean forsaking the gentility of her Southern upbringing. Tessa tempers the harsh day-to-day life on the frontier with charm and wit. Romance flits and flees in a churning cascade as the handsome William Bates and Peter Sundstrom compete for Tessa’s affections. For Tessa to find happiness in her future, she must learn to forgive and grow from the hurt and hardships in her past.

This sweeping story illuminates an oft-forgotten era in LDS Church history and highlights the history of Soda Springs, Idaho--oft referred to by early travelers as "an oasis on the Oregon Trail." Filled with drama, humor, and enduring love, it's a thrilling read for history buffs and romantics alike.

“Father!” Tessa jumped off the porch, skipping the four steps and landing with her bare feet on the dusty cobbles, making a soft thud. She raced toward the man silhouetted by the flames. “Father, what are you doing?” She whispered her shout as loudly as she dared, fearful of waking the rest of her family. “Stop!”
“Go back inside,” he hissed at her, scarcely turning his head in her direction as he tossed a jacket into the fire.
“Your uniform . . .” She gasped in horror. Flames consumed the gray woolen coat and trousers. “Why?”
“Go back inside, Tessa. Now.” He turned her toward the house and nudged her away from him.
“But—”
“Now!”
Stumbling across the fifty yards to the house, Tessa couldn’t help snatching glances over her shoulder as her father continued to heap various items of uniform garb in the fire. Reaching the top step on the porch, she turned around one last time and saw him remove something from the brim of his kepi then toss the hat in the flames.
Careful to not let the screen slam behind her, she bounded up the stairs to her room. Safely inside, leaning with her back against the bedroom door, she gasped in great gulps, trying to calm her pounding heart, squelch her tears, and stifle the sobs that caught in her throat with each exhaled breath.
Why would he burn his uniform? He’s only been home a few hours. What if the army wants him back? She knew the Confederate Army had paid for his uniform because he was an officer. But if he had to rejoin the fighting, they might make him pay for a new one. She also knew that their family would be hard pressed to pay for the several pieces of clothing that made up an officer’s uniform.
That was a perfectly good coat. Even if he didn’t get called up again, it would have been a nice layer in the winter. It made no sense why her father would be so wasteful when he knew the desperate situation his absence during the war had placed them. Something must have happened, she reasoned. There was no other explanation. But what?

During breakfast the next morning, Tessa Darrow looked across the table at her dad—her questions about last night roiled about in her head, but her father’s dark scowl warned her against asking them. At thirteen years old, Tessa knew better than to speak out of turn—especially when her father was in a foul mood.
Tessa’s mother, grandmother, and little sister, Bethany, were also gathered around the table; that’s when her father, Henry Darrow, broke the news. “Your mother and I have an announcement,” he said. “We’ve decided the time has come to move west to Oregon territory.”
“Oregon?” Tessa blurted. She stared at her father, aghast.
“Oregon!” Bethany squealed, delighted.
“What?” Grandmother paled, stunned at the announcement. “What are you talking about?”
“Oregon,” Henry stated as a matter of fact.
“When?” Tessa demanded, momentarily forgetting her place.
“Yes, Henry, when?” Grandmother’s gentle Southern voice took on a steely edge. She carefully folded the napkin in her lap, never dropping the icy stare she locked on her son. “I’d be curious to know when you’re planning to uproot this household. I’d also like to know when you came to this decision without even asking my thoughts on the matter.”
“When, Father?” Bethany’s young voice grew with excitement.
“Bethany!”
Tessa recognized the warning tone in her mother’s voice and grabbed Bethany’s hand, dragging her from her seat. “Be quiet,” she ordered. “Let’s go upstairs.”
“Girls,” Henry called after them. “Start thinking about what you want to pack. You may each take three dresses, five books, and one or two playthings. We’re leaving at the end of the week.” 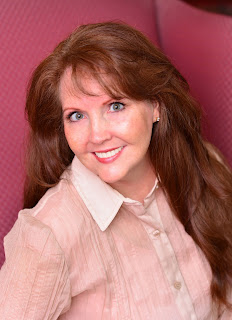 Carolyn Steele enjoys ferreting out obscure history and weaving it through her tales. With a career rooted in business writing, she loves researching details of her novels to ensure their historical accuracy, drawing praise from Pony Express re-enactors for her first novel, “Willow Springs.” Carolyn works fulltime writing communications for healthcare providers then spends evenings indulging her passion for writing historical fiction. When not at the computer, Carolyn loves traveling with her husband and visiting with her four children and thirteen grandchildren. In her spare moments, she traipses about Utah with a camera in hand, and occasionally muddles through a round of golf. She dreams of one day traveling the world, photographing all those mystical lands that beg to be backdrops for her novels.