About the Book:
Back in the officer's arms…


Four years ago, Tom Barrington shared a connection with  Elizabeth  Morley that was like nothing he had  ever experienced.  But as a solitary  soldier, he knew marriage was out of  the  question.

So when he strolls back into her life,  Elizabeth can't believe it. He  once  broke her heart, and now he's back—  more irresistible than  ever! And when  the dangers of Tom's lifestyle catch up  with him,  the question remains: can  he be the safe harbor she craves? 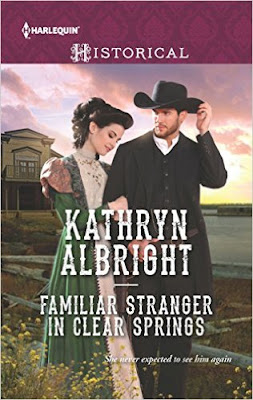 My newest release, Familiar     Stranger in Clear Springs, is a sweet,   clean romance that takes place in early San Diego. The inspiration came from research when I learned of the gold runs that would take place from Julian City in the back country to the bank in New San Diego. I also had a character—Elizabeth—who had become quite “real” to me and I knew I wanted to tell her story. Trouble was —she lived in La Playa on the water. How in the world was I going to get her from her comfortable mercantile on the harbor to the gold town of Julian?  (You’ll have to read it to find out.)
Tom Barrington is a special agent whose last government assignment   nearly killed him—and did kill his partner. He’s not sure he has the strength of will or body to do his job anymore—a job he used to feel so passionate about.
The day he strides back into Elizabeth’s life and demands to know about her marriage is the day Elizabeth realizes she never forgave—or forgot—him. And when Elizabeth is caught in the middle of his next dangerous assignment, Tom must confront the enemy who would separate them forever.
Paperback release: Available Now!    Ebook release:  January 1, 2016

Excerpt ~ First meeting
Elizabeth moved to the stove and filled the kettle with water. Stuffing kindling and old brown wrap­ping paper into the stove, she struck a match to it. “Just to take the chill off.”
Oh, my. She gave herself a mental shake. Here she was talking to her cat. Again.
Bells tinkled as the front door opened.
“We’re closed for the day,” she called out absently without looking up. A body should know one didn’t do commerce so late in the day. Who would be want­ ing something at this hour?
“Ma’am?”
Odd how a voice could stay in a person’s memory forever. The deep tone sent tremors to the ends of her toes. She nearly dropped the kettle. As it was her hand shook violently. A vision flashed through her mem­ory of the stranger she’d seen riding through town earlier. Now she could put a name to that form Tom. Tom Barrington. She stood frozen to the spot, unable to move for a moment. Then she glanced up.
Despite the thick dark mustache and scruffy beard hiding most of his face, she recognized him. It was his eyes. The blueness that had been so striking all those years ago was still there. His shoulders were broader than she remembered, and his frame taller, leaner, as though he’d lived hard without a lot of the finer comforts. That barely registered. She’d given up on ever seeing him again and now here he was standing before her. She could scarcely remember to breathe.
He stood in the doorway, black Stetson in hand, waiting for permission to enter the store farther. So clearly did the image come to her of the last day she had seen him standing there in his soldier blues that she drew in a shaky breath and set down the kettle. He wasn’t wearing a corporal’s uniform now, but a dark gray leather duster. His clothes had a layer of grit on them at least a half-inch thick. The wind off the ocean had tousled his dark brown, nearly black hair until it was completely lacking its parting on the side—or perhaps he  o longer kept it as he once had when he was in the military. He looked  surprised to see her—perhaps even shocked.
“Elizabeth?”
How many times had she hoped he’d walk back through that door over the past four years? One hun­dred? Two hundred? She’d imagined all sorts of sce­ narios. He’d rush in and sweep her off her feet. She’d run to him and throw her arms around him. Always, always, the dreams had ended in a deep kiss.  Of course, that had been when she’d thought he’d re­turn for her upon  receiving her letter. That hope…that dream…had died years ago. And, unlike  Laza­rus, it would not be revived. Four years was too long to wait for anyone.
Oddly, the thought flashed through her mind that she was glad she hadn’t yet changed from her day dress as she so often did once she shut up the store for the night. Usually she anticipated the removal of her corset at the end of a long day much as she imagined a horse reveled in the loss of his cinch and  saddle. For now, the laced binding under her dark plum-colored skirt and  bodice held her upright and firm. Perhaps she had enough layers on to feel    sufficiently armored against his charm now.
After all, he was the one who had left her. With­out word, without a care for what she’d thought they meant to each other, without asking her to wait for him or taking her with him. He’d been a scoundrel…and she hated him for it.
She swallowed. “Mr. Barrington.” The sound of his name came firm and cool. “I assume it is…‘Mr.’ now by the way you are clothed. Not ‘Corporal.’ Not ‘Captain.’”
“‘Mr.’ is fine.” He ducked his head under the door frame and stepped farther into the store. The door swung shut behind him with a solid whump. He didn’t even jump at the sound. In fact, he appeared a bit dazed as he looked at her, almost as though he were seeing a ghost. “What are you doing here?” 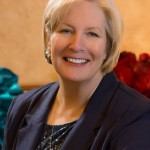 Golden Heart finalist and recipient of the HOLT Medallion Award of Merit, author Kathryn Albright writes American-set historical romance that celebrates the strength of courage, hope and love against all odds.