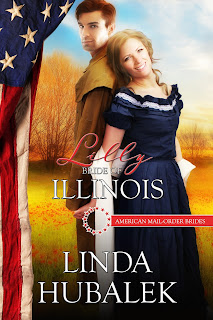 On fifty consecutive days beginning November 19, 2015, a romance will be published featuring a mail order bride, one set in each of the fifty states. The books, written by forty-five authors, are being released in the order the states were admitted to the union. The stories all take place in 1890, when a factory fire in the East burns to the ground, leaving these women unemployed. These women answer mail-order bride ads in the Grooms' Gazette, and then head out to find their groom.
My contribution, Lilly: Bride of Illinois, book 21 in the American Mail-Order Bride Series, is available as a pre-order now and will be released on Dec. 9th. It's a spin-off of my Brides with Grit Series featuring one of Pastor and Kaitlyn Reagan's boys, Seth, as an adult. My state to write about was Illinois, so Seth and Lilly meet in Chicago, but eventually end up in Clear Creek, Kansas.

Here's the story line for Lilly: Bride of Illinois.
A clean, sweet historical romance set in 1890. Lilly Lind was forced to emigrate from Sweden two years ago, due to circumstances beyond her control. She finds a job as a garment maker in the Brown Textile Mill in Lawrence, Massachusetts, finally feeling as though she is settling in her new country. Then a suspicious fire burns the mill, making Lilly seek another way to survive. She answers a mail–order bride ad in the Grooms’ Gazette and sets off for Chicago, believing she will be a business owner’s wife.
Kansas rancher Seth Reagan travels to the Union Stockyards in Chicago to attend the 1890 American Fat Stock Show, the American Horse Show, and to purchase horseflesh to augment his herd. When arriving at the train station, he overhears a conversation between a young woman and a shady–looking man. Seth becomes concerned for the mail–order bride who is whisked away to a saloon, not to her new husband’s home.
When Seth goes to the saloon to check on the young woman, he finds her in trouble and offers to help her escape. While buying horses and arranging their return travel to Kansas, Seth realizes he would like to bring Lilly home with him, too, but she is still being hunted by the saloon owner’s thugs.
Lilly’s good fortune in meeting Seth makes her want to start a life with this man, but he came to Illinois for horses, not a bride. Would he want her after he learns of her secrets?

I had a blast working with this group of authors and I think we put out a great series. Each book is so different from the other, ranging for western romance to a Victorian, depending on which state the book is featured in. Please go to the American Mail-Order Bride Series website for the complete list of all fifty books available for your reading enjoyment.

Thanks for stopping by to enjoy today's Sweet Americana Sweethearts blog. 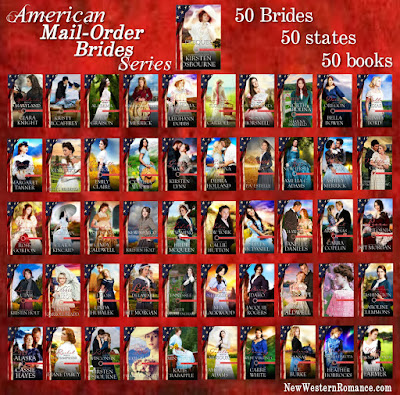