He Wanted A Wife by Christmas...

As Christmas approaches, Hank Chandler is determined to find a wife to mother his sister's orphaned children. When schoolteacher Janell Whitman offers to help him with his niece and nephew, she seems to be the perfect match—but she won't accept his proposal. Instead, she insists she'll find him another bride before the holidays.

Janell moved to Turnabout, Texas, to put her past behind her and focus on her future—one that doesn't include marriage. But while she plays matchmaker and cares for Hank's children, she loses her heart to the two youngsters…and their adoptive father. If Janell reveals her secrets to Hank, will he still want her to be his Christmas bride? 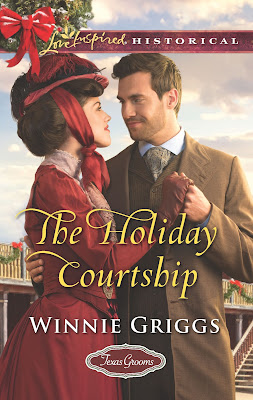 “I suppose I’ll have to look elsewhere then.”

Mr. Chandler’s comment pulled her back to the present. Thank goodness he seemed to have seen nothing amiss in her demeanor the past few seconds.

Still, she was unexpectedly piqued by his easy acceptance of her refusal. Apparently she was nothing more than one of the names on his list.

Janell gave a stiff nod as she sat up straighter. “So it seems,” she replied, striving to keep her tone unemotional and businesslike.

“I wonder if you’d mind giving me your opinion on some potential candidates,” Mr. Chandler asked.

“You want my opinion on who would make you a good wife?” Apparently he saw nothing incongruous about asking the woman he’d just proposed to help him pick a wife.

He frowned as if insulted. “Not a wife. A mother for the children. There’s a difference. What I need from you is an opinion on how the lady under consideration and the children would get on.”

“I see.” The man really didn’t have an ounce of romance in him.

He nodded, apparently warming to the idea. “With your insights, you can save me from wasting time talking to someone who’s obviously not the right fit.”

Janell resisted the urge to roll her eyes. “Assuming you find the right woman, may I ask how you intend to approach her?”

His eyebrow shot up at that.

“If you’re wondering if I intend to go a’courtin—” his tone had a sarcastic bite to it “—the answer is a very definite no, at least not in the usual way. Like I said, I will make it clear right up front what my intentions are. I don’t want to deceive anyone into thinking this will be more than a marriage of convenience.”

“Your intentions are admirable, I suppose, but I would advise you not to just baldly lay out your intentions, and propose.”

She didn’t let him finish. “I understand why you wouldn’t want to go through a conventional courtship or mislead the lady as to your feelings. But don’t you think you and your prospective bride should get to know each other before you propose? I mean, you must take the time to decide if she’s the right one to share your home, and the right one to share the responsibility for the children.”

He drew himself up. “I consider myself a good judge of character. It won’t take me long to figure out if she’s a good candidate or not.”

“I see.” She held his gaze, hoping to make her disapproval obvious.

Apparently, it worked. “I assume you’d handle it differently.”

Was she really about to give him pointers on how to find a wife? Janell swallowed a sigh—It seemed she was. “I’d recruit a third party to act as a go-between.” She leaned forward, trying to emphasize her point. “It should be someone you can count on to have your and the children’s best interest in mind, someone whose judgment you trust.”

“And what would this go-between do, exactly?”

“Go to the candidate on your behalf, of course. He or she would let the lady in question know the situation in general terms without extending any offers or promises, and ascertain said lady’s interest in such a match.”

“So you agree that a businesslike approach is best, just that I should go about it from a distance.”

“It could save a great deal of awkwardness and misunderstanding if you did so.”

“Assuming I go along with this plan of yours to use a go-between, and they acted on my behalf, then what?”

“Well, if the lady appears interested, he could ask a few discreet questions that would allow him to form an opinion of how good a fit she would be for you and the children. Then he would report back to you, and the two of you could discuss whether to pursue her or move on to another candidate.”

“In other words, you think I need a matchmaker.”

“You could look at it that way, I suppose. But you do want to approach this in a very businesslike manner, don’t you?”

He nodded. “I have to admit, it sounds like a good approach.”

Happy that he’d seen the wisdom of her advice, she moved to the next logical step. “Is there someone you could trust to take on this job of go-between?”

He rubbed his jaw, deep in thought. Finally he looked up. “How about you?”

“Me?” She raised a hand to her chest, surprised. “Surely you have some close friend—”

“You’re already intimately acquainted with our situation. I have complete confidence that you’d be looking out for the children’s best interests. And this was your idea in the first place so I don’t have to do a lot of explaining . In other words, you’re the perfect candidate.”

“Still, I would think you’d want someone you know better—”

“It also occurred to me that this is a role that would benefit from a woman’s touch.”

He had a point there.

“Besides, I believe you’ll be looking out for Chloe’s and Alex’s best interests.”

Janell shifted. “As you said earlier, the children and I have formed an attachment. I’d like to make certain that the woman whose care they are eventually placed in can give them the love and attention they’ll need.”

He sat back with a smug smile. “Exactly.”

Why not? “Well then, if you’re sure you trust my judgment, I would be glad to assist you in finding a wife.”

As soon as the words left her mouth, Janell wondered what she’d just gotten herself into.

Was she really going to take on the role of matchmaker for Hank?

Sweepstakes: Winnie is giving away to one lucky winner their choice of any book from her backlist for leaving a comment either on this blog post or on either her Facebook page or her Twitter account. This offer is good only for United States residents. A complete list of her books may be found by clicking HERE.

Winnie Griggs grew up in south Louisiana in an undeveloped area her friends thought of as the back of beyond.  She and her two younger siblings spent many an hour exploring the overgrown land around her home, cutting jungle trails, building forts and frontier camps, and looking for pirate ships on the nearby bayou.   Once she ‘grew up’ she found other outlets for dealing with all those wonderful, adventurous imaginary friends by filling notebooks with their stories.

Eventually she found her own Prince Charming, a rancher whose white steed takes the form of a tractor and whose kingdom is situated in a small rural community that she loves to call home, and together they’ve built their own storybook happily-ever-after that  includes four now grown children, two of whom are twins.

Winnie loves to hear from readers.  You can connect with her on facebook at www.facebook.com/WinnieGriggs.Author or email her at winnie@winniegriggs.com.