Who Was Ling Loi? by Zina Abbott 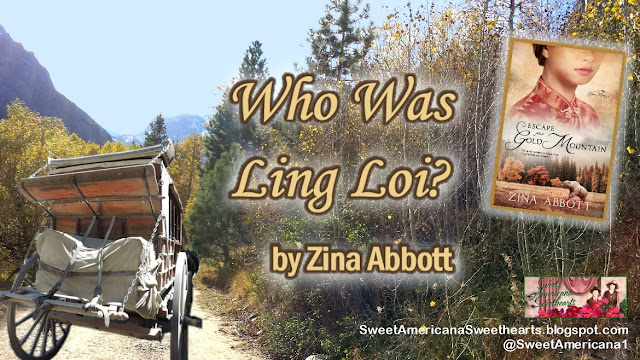 The inspiration for my latest novel, Escape from Gold Mountain, came from a reference in the book, Lundy, by Alan H. Patera, under the sub-heading of Desparados:

Known as “Tex”, John Wilson,…In late September he held up the Bodie Stage in Mill Creek Canyon, shortly after it left Lundy early in the morning. He kidnapped a Chinese woman on the stage – he apparently knew she was carrying a large sum of money. He stole her $260 and held her captive for eight days. …

When I started my research, I came across the following in newspaper:

I include several historical characters in my novel, among them my heroine, Ling Loi. Exactly who was Ling Loi?

One of the first things I figured out about researching nineteenth century Chinese women is that, with a few notable exceptions, it is extremely difficult to find information on them – not even their names – in official records. Ship passenger records? The San Francisco earthquake of 1906 destroyed most records kept in San Francisco.

Even if ship passenger records survive, it is doubtful one would find records of most Chinese women who came to America. For one thing, as the decades progressed, and the laws preventing Chinese immigration grew more restrictive, more and more women were smuggled in for the purposes of prostitution outside of official record-keeping. How was it done? By bribing the white American port officials overseeing the immigration laws and their enforcement.

Same with federal census records. If they listed Chinese women at all, their names were not given. In the 1880 census for the Homer and Lake districts which took in the Lundy region, I found one Chinese woman who was identified as a prostitute. The following is typical of the records I found in Bodie for 1880:

Note that many of these women, all identified as “Chinawoman,” were mostly in their twenties, yet living in a household with a “wife,” also unnamed. Usually on a census, the adults have an occupation listed, including women who were "keeping house," Yet, none of these women had their occupations listed. The Chinese husband who was named, and who was probably the informant, did not know his wife’s name? Chances were, he did not want the names of these women identified because they most likely were not waitresses or housekeepers as one may think based on the man’s business, but they were prostitutes.

A little background on Bodie, it had its big mining boom in 1879. According to local Mono County historian, Ella M. Cain, that was the same year the Chinese descended upon Bodie in a hoard. They stayed together under the direction and control of the Tong boss, Sing Wo, who owned a large mercantile, opium den, and gaming parlor. Other histories of the town mention there were numerous Chinese prostitutes. When the mines began to play out, and the earnings dropped, the Bodie Chinese left like they came – en masse.
Author Benson Tong had this to say in his book, Unsubmissive Women:
“Chinese prostitutes in California commonly shared one trait – their youth. David Beasley found that the average age of Chinese prostitutes in Nevada County, California in 1860 was 24. In his study of six mining counties in California, Dufault showed 27 as the average age of Chinese females, including prostitutes.”

He also points out the following:

After 1854, the nature of the Chinese vice enterprise began to change. Increasingly, the trade gravitated into the hands of fighting tongs. The first such organization in San Francisco, the Kwang Tek Tong, emerged around 1852; two years later, the Hip Yee Tong made its appearance. Throughout the nineteenth century, there numbered probably no more than eight fighting tongs. Essentially, these structured, exclusive socioeconomic organizations struggled for political and economic power within the Chinese community. Eventually, they monopolized commercialized vice establishments -- gambling saloons, opium dens, and brothels.

In spite of this, I found it interesting that Mr. Tong speculated in his remarks about Ling Loi that he thought she worked independent of a tong’s control. Her story does read like it is possible – she was taking her earnings to San Francisco in September of 1884. However, considering the intense restrictions on the immigration of Chinese women following the Chinese Exclusion Act of 1882, and the degree to which the fighting tongs ruled the vice trades in all the China towns and throughout the mining districts in the American West by 1884, I find that highly unlikely. Based on my research, even if she showed up in Chinatown in San Francisco as an independent, she would immediately have been coerced into working under the control of one of the fighting tongs.

Mr. Tong speculated she worked in Bodie. However, the source he used indicated she worked in Lundy. His source was the book by Ella M. Cain about Bodie. Mrs. Cain’s reference from The Story of Bodie is found under Chapter 8 – Jim Pender’s Stories of Lundy.

…Now there was a China girl in town by the name o’ Ling Loi, who had been down in the Chinese joints all summer, and had made herself a lot o’ money. It it had been noised around, by the grapevine, that Ling Loi was goin’ out on the stage in a couple of days, an’ takin’ all her wad with her. Now, Jardine had a losin’ streak at poker for a while, and just about this time he found himself dead broke. He'd never been given to doin’ hard work to get money, so he hit upon a plan. He propositions Tex on holdin’ up the stage, taken the Chink girl off, and holding her for ransom. Course he’d relieve her of the wad she had on her right away. Text was not only agreeable, fact is, he was plumb delighted at the whole idea. To stage holdup would be excitin’ enough, but to steal and make his getaway with a pretty little gal like Ling Loi, that was somethin’ that had adventure in it.

[Author note: I have no idea yet who Jim Pender was. However, in Mrs. Cain’s book about Bodie, she relied heavily on the folksy tales told by this storyteller. I suspect they have developed the characteristics of  tall tales more than well-researched fact.]

In late September of 1884, John “Tex” Wilson stopped the Bodie & Lundy stage soon after it left Lundy, and abducted a Chinese woman whom he had learned carried money. He took her into the mountains, robbed her, and held her for eight days.

From The Story of Early Mono County by Ella M. Cain:

There had been a little painted Chinese girl named Ling Loi in the underground of Chinatown all summer. She was leaving on a certain day for San Francisco, by stage from Lundy, supposedly taking all her earnings with her.
The Jardine gang entered into a conspiracy to kidnap her off the stage, rob her of her money, and hold her for $2,000 ransom, which they were sure the Chinese in Lundy would pay.
One of their gang, Tex Wilson, was hired to do the job….
The stage was held up by Tex, much to the consternation of the passengers, but Ling Loi obeyed orders and got off.

Ling Loi did live through the experience. She was returned to Lundy, the details you may read about in my novel or perhaps in another blog post.

What happened to Ling Loi after she was returned to Lundy? I have no idea. I found no references to her later life in newspaper articles. I searched Ancestry and the various digital newspaper collections online, but found nothing specific to her. Another difficulty: I did not find her in the 1880 census (many Chinese, especially the women, were not enumerated), and the 1890 census was all but destroyed by a fire. I did not find her in the 1900 or the 1910 federal census.

The following are from my notes after the end of my novel:

It is also likely that Ling Loi was not this prostitute’s real name, or she switched the traditional way of presenting her name to conform to Western naming practices. It is also possible that the historians who recorded the name were not aware of Chinese naming practices where the surname, or family name, is first, followed by the given name. Ling is a Cantonese Chinese woman’s given name, not usually a surname. Loi might be a phonetic spelling of a different, more common Cantonese surname. It is possible that her family was Lai, Li, Lei, Lui, Lo, Loh, Luo or Liu, and her given name was Ling.

Based on that, is it possible that either of these two documents recorded information about this same Ling Loi who was abducted off of the Lundy to Bodie stagecoach?

The 1910 Federal Census, recorded on April 15, 1910, lists a Ling Loy in Stockton Ward 4, San Joaquin, California. This was an enumeration of the patients in the California State Hospital constructed as an insane asylum in Stockton in 1853. If a former prostitute were here, it was possible she might have gone insane as an end-stage symptom of syphilis.
The Ling Loy here was born in China in 1862. Her age in 1910 would have been age 48. The same woman in 1884 would have been age 22.

Do either of these records belong to the Ling Loi of the stagecoach abduction incident? Who knows? What I did in my novel was create an alternative history ending for my character. I hope my happily ever after hinted at a more fulfilling life than the one lived by the real Ling Loi.

Escape from Gold Mountain will initially be offered on more than one vendor. If you are a Nook reader, the book will only be available for Nook purchase for about 12 days before it will be offered digitally exclusively on Amazon and in the Kindle Unlimited program.

The book will also be offered in print format and continue to be offered for sale as a paperback on both vendors. 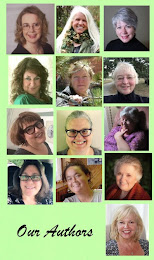