Look what our authors published in April! 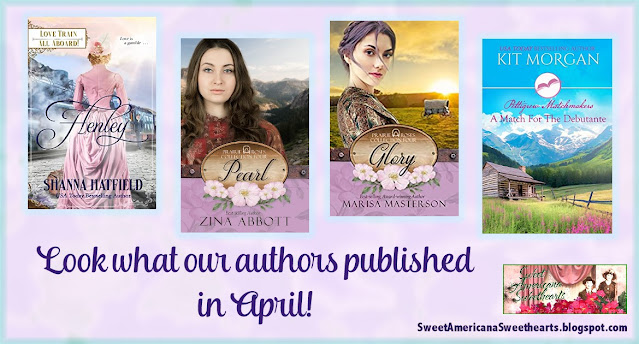 Our authors have been busy writing and publishing books this past month. Here is what we published in April:

Love is a gamble, and heartbreak is a risk she’s willing to take.

Despite her dreams to set down roots, Henley Jones has never had a place to call home. She’s spent her life on riverboats and railroad cars, tagging along with her gambling father. A shoot-out during a card game results in his death, leaving Henley alone and nearly penniless. Out of luck and options, Henley agrees to travel across the country to the newly established town of Holiday, Oregon to marry a stranger.

A demanding practice in a town clawing its way to respectability keeps Doctor Evan Holt rushing at a hectic pace. He’s far too busy to see to pressing matters like hiring competent help, or finding a wife. When one of his patients orders a mail-order bride, Evan can’t decide if the man is crazy or brilliant. From the moment he meets her, Evan battles an unreasonable attraction to the beautiful, charming woman who seems to be hiding something from her past.

In a town flush with possibilities, will taking a chance on love end with heartache or a winning hand? Find out in this sweet western romance full of the humor, hope, and love.

Henley is part of the Love Train sweet romance series. Look for more books set in Holiday in the heartwarming and wholesome Holiday Express series.

Man goes to mountaintops to pray. Woman, caring for hearth and home, stays too busy to climb, so God comes to her.

Because Pearl has no acceptable marriage prospects she considers acceptable, when her father decides to sell out and join her brothers in Oregon Territory, she must go, too. Her discontent increases when, not far from South Pass, a middle-aged widower and self-subscribed preacher with four children—whose wife recently drowned during a river crossing--walks down from a nearby mountain and informs Pearl that God decreed she is to marry him.

Pearl has no desire to marry the sanctimonious and overbearing widower. She reads her Holy Bible. She prays. She diligently strives to honor her father and bear her burdens with patience, but enough is enough. If God wants to tell someone whom she should marry, He can tell her. She has no time to climb mountains. Will God answer the prayers she offers as she performs the tasks of everyday life?

Michael Stanwyck has no room in his life for marriage and family. After the death of his father, Michael takes his portion of the inheritance and buys his own dry goods—enough to fill three freight wagons he’ll accompany to the gold fields of California. He comes across one brown-haired beauty more than once. Although curious why she remains unmarried, it is none of his business. Then he finds her alone on the trail several days past Fort Hall with her family wagon and a lame ox. He learns her father recently died, and, because she refused to marry in order for a man take charge of her and her wagon, for the peace and security of the wagon train, she was ordered to leave.

Can Michael, in good conscience, continue on to California and leave Pearl to return alone to Fort Hall, where only an uncertain future awaits?

While it’s late in the season to start out, a wagon train forms to head to Colorado. She has no choice but to go with her father, leaving in late July.

The trip will be only 6oo miles. Easily done before snow falls. What could go wrong?

Glory will learn the answer to that on the trail. An answer that leads to a rushed marriage at the wrong time with a man who's simply Heaven sent.

A Match for the Debutante: A Sweet Historical Western Romance (Pettigrew Matchmakers Book 3)

An Arranged Marriage to save the day.

And a groom with the personality of a door stop ...

Alice Pratt attended college to get away from her over bearing mother. But she was realizing that might not have been the best idea. Many of her friends were already married or engaged, and helping Mrs. Pettigrew plan a couple of weddings and assisting with her new matchmaking school only drove the point home. Spinsterhood was staring her in the face and there were few eligible bachelors to be had. So when her mother tells her about an arranged marriage she and her father have cooked up, Alice begins to see the light at the end of the tunnel. Problem is, her groom's allergies are so bad, he can hardly leave his house. He wasn't much of a conversationalist either. What should she do? Take what her parents offered or risk spinsterhood? Find out in this fun romantic romp as only Kit Morgan can deliver!

Amity Grenville is set on reaching Oregon’s Sweet Home Valley, where her aunt and uncle have a farm. They were part of the Great Migration of 1843, and Amity saved every letter Aunt Beitris wrote, complete with advice on the journey preparations. Amity is eager for a fresh start, in the hopes that her husband, Garvey, will find a new vocation in farming and leave behind his drinking and gambling ways.

Newly finished with his apprenticeship, blacksmith Shawe Creighton can ply his trade just about anywhere so he agrees to throw in with his best friend’s family on the trek to Oregon. With no family ties, he heads west, thinking Oregon is as good as any place to establish a shop. Fun loving by nature, he’s also looking forward to what the adventure will bring.

In St Joseph doing last-minute preparations for the journey, Amity receives the bad news that Garvey was caught cheating and killed over a poker game. Now men are seeking to claim the wagon and team as their recompense. She barely removes her belongings in time but is faced with either marrying a stranger to comply with the wagon train’s rules or remain behind. Taking pity on her plight, Shawe offers marriage and is immediately faced with her two demands--no drinking or gambling. Intrigued by the outspoken woman, he figures the trip won’t be boring. Will a decision made in haste bring disaster, or will the journey forge bonds neither Amity nor Shawe can imagine?

Rose Calloway feels guilty about living off her sister’s meager schoolmarm’s wages. In spite of taking in sewing, she sees little future for marriage in a town where people are still struggling from the latest economic depression. Being the younger sister of the formidable Marigold doesn’t help attract suitors, either. She responds to a matrimonial advertisement, and after corresponding for several months, sees great promise for her future with Joshua Kent.

Joshua Kent, landless and employed as a farrier, sees promise in the land run planned for the Cherokee Strip in Oklahoma Territory. Knowing once he claims his acres, he will need a wife, he places a matrimonial advertisement. He soon decides Rose Calloway is the woman he wishes to marry. However, once he realizes there will be far more applicants than there is available land, he warns Rose he can only marry if he is successful claiming his own plot.

As Marigold prepares to leave for Oklahoma, Rose—homeless unless she marries or goes with her sister—holds a ticket for a land claim in one hand and the letter from Joshua Kent in the other. Her dream is to marry Joshua, not own land. What will she do now?

…some come as blessings
Anxious to leave behind the whispers and stares of two failed engagements, Boston socialite, Ainsley MacKenzie hopes for solitude on her way to New Hope, Kansas. But when the kindly conductor enlists her help to care for two orphaned girls, she couldn’t say no. Little did she know their uncle and guardian was the one man she couldn’t forget… Lucas Harmon.
Taking a chance, Ainsley offers Lucas an unusual (some might say, scandalous!) arrangement. She’ll look after the children, read them stories and cook their meals until Christmas, giving Lucas time to find a permanent replacement. Yet, the longer she cares for the family the more she longs to be part of it—whatever the risk to her heart.

Posted by Zina Abbott Author at 4:00 AM