When I was working on my recently released sweet romance Henley, there is a scene where an anxious first-time mother takes her fussy baby to visit the doctor (who happens to be the hero).
Doctor Evan quickly surmises the baby is teething and tells the mother to ...
That's where I had to stop and do some research.
The year is 1885. I wasn't certain how they'd handle teething then.
According to my trusty Sears & Roebuck Catalog from 1897, they had products available to help with teething troubles.
So, I started digging further back to see what I could find.
And I happened upon these fascinating teething pegs. 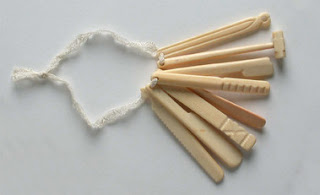 Apparently, ivory teething pegs were popular in the Victorian and Edwardian eras before plastic options were introduced.
The pegs both soothed and amused a baby battling sore gums as teeth emerged.
This particular set of teething pegs features eight different designs, attached to a piece of lace that could be tied to the baby's clothes to keep the pegs close (and the pegs from being swallowed!).
The designs of these particular pegs include a saw with a serrated edge, a hammer, a cricket bat, a toothbrush, and one that almost looks like a pair of tweezers or pliers.
Babies who had these lovely pegs to gnaw on and play with were far more fortunate than others.
From ancient times, there have been any number of ghastly methods applied to teething babies from leeches to smearing the gums with smashed animal brains.

Mrs. Winslow's Soothing Syrup packed a wallop since the main ingredient was morphine!
Coral was a preferred substance for a time. A coral teether often looked like a rattle with the coral as a stick attached at one end, with silver bells on the other. I can almost guarantee if my baby nephew had this form of teether, he'd either brain himself or his brother with it!

Some mothers used a ring of "India rubber" to attempt to soothe tender gums. Those without funds for "luxuries" may have done nothing more than rub the gum with a finger. There is mention of using licorice root, orris root, dry crusts of bread and wax candles for teething.
Since the doctor in my story is a good, kind doctor and not some loony quack, I have him give the mother a set of teething pegs.
Babies (and their parents!) today are fortunate to have so many safe and soothing options to help through the trials of teething. Love is a gamble, and heartbreak is a risk she’s willing to take.
Despite her dreams to set down roots, Henley Jones has never had a place to call home. She’s spent her life on riverboats and railroad cars, tagging along with her gambling father. A shoot-out during a card game results in his death, leaving Henley alone and nearly penniless. Out of luck and options, Henley agrees to travel across the country to the newly established town of Holiday, Oregon, to marry a stranger.
A demanding practice in a town clawing its way to respectability keeps Doctor Evan Holt rushing at a hectic pace. He’s far too busy to see to pressing matters like hiring competent help or finding a wife. When one of his patients orders a mail-order bride, Evan can’t decide if the man is crazy or brilliant. From the moment he meets her, Evan battles an unreasonable attraction to the beautiful, charming woman who seems to be hiding something from her past.
In a town flush with possibilities, will taking a chance on love end with heartache or a winning hand?
Find out in this sweet western romance full of humor, hope, and love.
Read more about Doctor Evan in Henley.

Connect with Shanna online at her website.
Posted by Shanna Hatfield at 12:38 AM