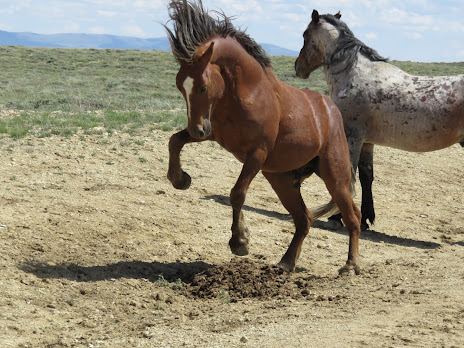 “The cook is serving fresh biscuits and gravy this morning? I’ll be there. Wild horses couldn’t drag me away.”

In the United States, horses are not an indigenous creature. They were brought here by the Spanish and English as they colonized the Americas. As time went on, people let their horses free for a plethora of reasons—they couldn’t keep them or they just got free. Once free, the horses found each other, formed herds, and bred, and over time, became feral and untamed by humans. Out west, when a cowboy decided he needed a new horse, he could choose to catch one.

Typically, they did that by lassoing a horse and then wrestling with it around a post or tree, or tied to another horse. The wild horse would fight the rope for a time, pulling and dragging the cowboy until he could manage to get that rope around a tree or other object. Regardless, wild horses had a reputation for pulling, and sometimes, a cowboy would get dragged for a bit.

So, wild horses had a reputation for pulling and dragging even the best of cowboys. This saying plays into that picture for the cowboy. What he means is: nothing could stop him from doing “the thing” because he is very determined.