Insights about The Oregon Trail

For the current story I’m writing titled Cadi, I’ve been researching travel on the Oregon Trail. Not only have I read The Prairie Traveler, a manual that helped travelers prepare for the trek (and became a bestselling book), I’ve also read firsthand accounts of people who made the journey. The thing I found most interesting was the differences in the type of personal observations.

Men related details about the terrain, weather, geographic locations, and miles covered each day. They discussed if any special precautions were undertaken at river or creek crossings. Women counted gravestones, worried about the health of their children, and often fretted about ever reaching the destination. They weren’t wrong to do so because few families ended the journey without suffering a loss of some type. From the women’s journals emerged a common complaint: none of them initiated the trek. All would have been happy to remain in their east-of-the-Mississippi-River homes and work a bit harder to get ahead.

But because of the times they lived in, they had to accede to the wishes of their husbands who were the recognized heads of the households. They had to leave behind their friends and families (and often the majority of their cherished household furnishings) and embark on a promised four-month trip that often expanded to six months due to unforeseen circumstances. For these women, they drove ox or mule teams or trudged across prairie grass for most of the sunlit hours, always looking forward to the time after the evening meal when they might have a few minutes to talk with other women. The trip was only make bearable by reestablishing what they knew--gathering with other women to share the stories of where they’d lived, what their lives had been like, and to speculate on what life would be like in their new homes. They clung to the familiar in a world they didn’t understand.

The Prairie Traveler by Captain Randolph A. Marcy

Westering Women and the Frontier Experience 1800-1915 by Sandra L. Myres

Women’s Diaries of the Westward Journey by Lillian Schlissel 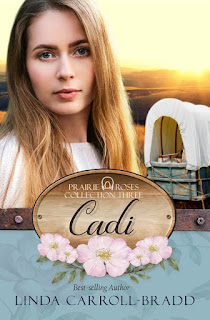 Carpenter Trynt Pembroke just wants a fresh start. A week before his wedding, he was betrayed by his fiancée who ran off with his brother. He’s looking to get as far away as he can and start a new business. As much as he doesn’t want the complication of a woman in his life, he keeps coming to the rescue of strong and determined Cadi, a woman who shares his cultural heritage. Can he convince her they are stronger together than on their own?

Visit the April Facebook Launch Celebration on April 27th to learn more about the story and read about other titles. Prizes are offered by multiple authors. Click to join event
Posted by Linda Carroll-Bradd at 12:50 PM